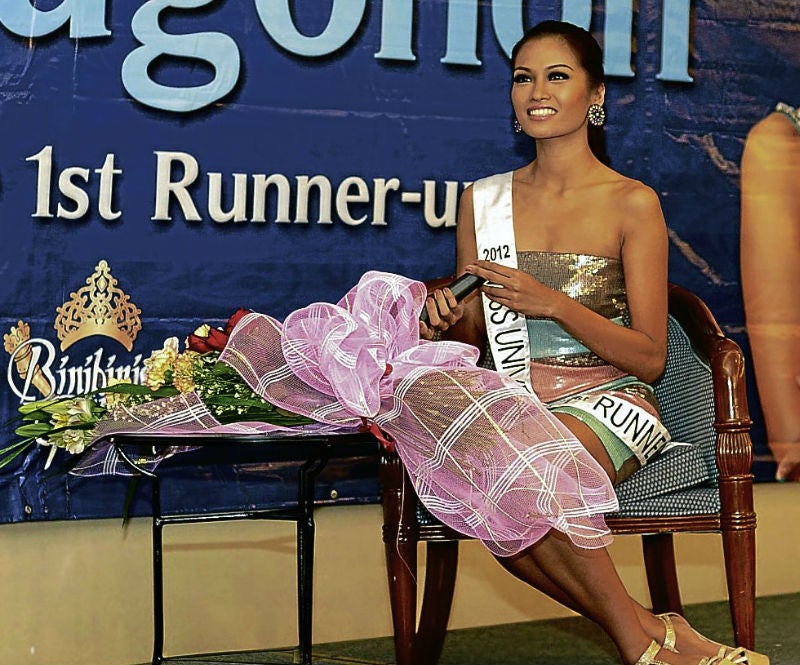 HOME BEAUTY. Miss Universe first runner-up Janine Tugonon of the Philippines meets journalists in a press conference at a Quezon City mall shortly after her arrival from the United States. AUGUST DELA CRUZ

For a beauty queen, winning the Miss Universe crown would have been everything. Not for Miss Philippines Janine Tugonon.

“If winning the crown will give them hope and happiness, let’s give them that,” she said on arriving in Manila yesterday a week after the American contestant Olivia Culpo narrowly beat her for the title in the pageant held in Las Vegas, USA.

“The US is pitiful these days because of the tragedies [they suffered],” Tugonon said, referring to the Dec. 14 killing of 20 schoolchildren and six adults in an elementary school in Connecticut and the devastation wrought on the US East Coast by Hurricane “Sandy” in October.

“I think we should be happy, we should be thankful. When I was there, the environment was very sad. So if the Miss Universe crown will make them happy, then it’s okay, they really need it.”

At a press conference at Gateway Suites in Quezon City, Tugonon described Culpo, a 20-year-old university student, as a “really nice person.” It was the eighth time the United States had won the Miss Universe title.

Pageant fans online have been flooding social networking sites with remarks declaring Tugonon the true winner based on her answer to a question during the pageant.

Judge Nigel Barker asked Tugonon if a Miss Universe winner should be required to speak English. She said it was not about learning a language but being an influence to others and having a heart that’s ready to serve.

Tugonon said she believed she gave a decent answer. But she said “judging is not solely based on that alone. I remember my uncle told me that ‘judging is subjective,’ so however great your answer may be, the judges may like another response more.”

“There are really several factors, including the way you walk on stage,” she added.

Tugonon revealed that after the coronation night held at Planet Hollywood Casino, she spoke with most of the other contestants who, she said, told her, “We know [the winner] was supposed to be you, and you know it should have been you.”

Her roommate from Indonesia shed tears when she made the cut. “She was so happy for me, she’s a really nice person,” Tugonon said.

She said that after the ceremonies, three of the male judges, including Barker, approached her, shook her hand and told her, “You are gorgeous!”

She also said she felt she got special attention while she was in Las Vegas.

At first, Tugonon said she did not give much credit when she was chosen to shoot a campaign for Chi hair products—a pageant sponsor—together with the entry from the Cayman Islands.

But she somehow felt special when she was again included for a special shoot for Australian Gold sun tan lotion with a select group of candidates.

When she appeared on a talk show for Fox 5 with Culpo, she knew it was a favorable development.

“I thought to myself, ‘Hmmm, only Miss USA and me? That must be something!’” Tugonon said.

Despite her accomplishment, Tugonon said there was no reason to brag.

“If you think about it, I was not the only one who exerted effort and brought me to where I am now … There were a lot of people involved. The Lord was immensely involved in all this,” she said.

Tugonon was cheered by fans on her arrival at the airport at around 6 a.m. on Philippine Airlines flight PR-107.

She told airport reporters she was very thankful for the support of all Filipinos.

“Even the organizers were surprised why there were so many Filipinos there [in Las Vegas],” she said.

Tugonon arrived with her sister. Their mother chose to stay behind in Las Vegas.

Among those waiting at the airport was Tugonon’s boyfriend, Jaypee Santos, who waited in a van outside the arrival area.

She said she had no ill feelings at not winning the crown.

“For me, judging is subjective, right?” she added. “Of course, judges have different likes. But what’s important is that I did my best.”

Tugonon’s first runner-up finish came with a $3,000 prize which she said she would use to help pay for a house she recently bought. She also plans to go on a vacation with her loved ones in Palawan.

BPCI has lined up a series of appearances on television for Tugonon. A motorcade and a courtesy call on President Aquino are also expected to take place soon.

The Philippines has two Miss Universe winners: Gloria Diaz in 1969 and Margie Moran in 1973. In 1999, Miriam Quiambao won  first runner-up. With a report from Jerome Aning