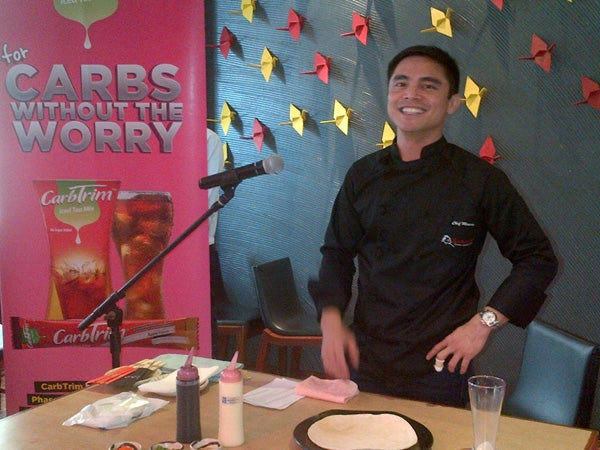 Marvin Agustin shares how a special partner helps him manage his weight during the holidays.

MANILA, Philippines – It’s that time of the year when every Filipino family’s Noche Buena table will be laden with the best prepared holiday meals – a big feast to celebrate the Christmas season.

With all the delicious delights offered during non-stop Christmas parties, it’s almost a daunting task for Filipinos to maintain a healthy lifestyle and hold back on food intake.

But celebrity and well-acclaimed restaurateur Marvin Agustin is not a tad bit worried about gaining weight as he shared his “special partner” for pigging out with his family this holiday season.

Launched in October 2011, local health and wellness company United Laboratories, Inc. introduced CarbTrim as the first carb-blocking iced tea mix in the Philippines. The company noted that its special ingredient is the Phase 2 White Kidney Bean Extract – a safe, all-natural component that blocks the absorption of up to 66% of carbohydrates in the body.

Agustin, who has been using the product for a year, said that he believed that the product was perfect for Filipinos who eat their hearts out with members of their families during the holidays.”

He noted how Filipinos loved to pair rice with almost any dish as he revealed that until now, he loves to eat arozcaldo even during merienda.

Agustin shared how he always looked forward to celebrating Christmas in the Philippines with members of his family and cherished the memorable “moments of togetherness” during the holidays.

Agustin said he discovered the product through his family members some time in Christmas 2011 when he went to their kitchen and saw his mom and sisters drinking the iced tea.

“I tried it, I found it effective…..I felt different after using it and I learned to enjoy it,” Agustin said. He said he actually “tweeted” about his experience and a month later,  got a partnership deal with CarbTrim management to offer the drink at his Sumo Sam outlets.

Agustin said he immediately felt the effects after using the product but when media reporters pressed for clarification, he reluctantly replied: “Nahihiya ako eh… it feels like going through ano….iba iba yung effects sa tao….sometimes they sweat it.”

A look at the fact sheet on the product revealed that while the white kidney bean extract was safe, its effect was a “noticeable increase in the volume of waste charge.” The company said that this was because the blocked carbs were turned into fiber that helps the body excrete more waste. It said that it was best to drink CarbTrim before or during meals.

Agustin said it was not hard to squeeze the drink into his busy lifestyle since he said it felt good to have something that’s “readily available, handy, and inexpensive.”

And even though the product is in iced tea format, he pointed out that it only has eight calories and a natural sweeter “so hindi siya nakakataba .”

“We always say don’t rely on it to lose weight, it helps you lang during pig-out times…it’s something that can help you manage your weight but you still have to maintain an active lifestyle,” Agustin said, adding that he preferred to drink the apple than the lemon flavors of the iced tea.

With 33 restaurants serving Filipinos nationwide, the man who bagged this year’s 2012 Young Entrepreneur of the Year award by Ernst and Young said that he wanted to celebrate his success by offering new carb-rich delights at his Sumo Sam outlets – Chicken Sesame Soba and Chicken Mango Teriyaki Pizza.

As the “master Chef” showed his guests his skills in cooking his restaurant’s dishes, Agustin shared that he wanted his restaurants to come up with dishes that would “excite the family, especially the children.”

“Sumo sam is a family type restaurant and we make sure even the kids would love our items…..my own kids are my inspiration pang test ng pagkain,” Agustin said.

Even with his continued success, Agustin said that he would never forget the sacrifices of the Filipino chefs as he lauded them for “not choosing to leave the country and work abroad.”

“I’m very happy kasi marami kaming natutulungan na chefs and waiters….. I myself was a waiter before, even a mascot before, and now I’m able to help other Filipinos who choose to stay here in the country and not leave us,” he said.