‘Follow your compass, not your clock’ | Lifestyle.INQ ❮ ❯ 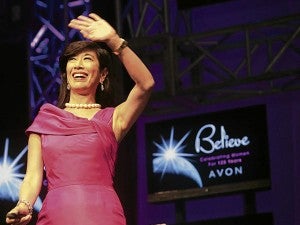 When she first interviewed for a job at Avon, Andrea Jung says then chair James Preston had a plaque in his office that bore an image of four footprints. One was of a barefoot ape, another of a barefoot man, then a man’s wingtip shoes and a woman’s high heel. The plaque said, “Evolution of Leadership.”

Intrigued, the young woman executive asked Preston if he, indeed, believed what was portrayed on the plaque. That was in 1993 when “there were no women in senior jobs,” Jung says.

“At that time Avon had 3.5 million representatives, women who were selling the products, and he said someday a woman should run Avon,” Jung says. “He really believed it, giving women a chance, and that was true for me, too. I don’t think [a woman] should have a better chance than a man but [should have] an equal chance. When I became CEO, he sent the plaque to me with a big bow and it’s now behind my desk.”

Jung talks passionately about the women empowered by opportunities afforded through Avon, the same women who, she says, inspire and drive her to do her work as company chief and philanthropic leader.

Jung herself is a source of inspiration. She’s admired for what she has achieved in her career and what she represents for women worldwide as female chief of a multibillion-dollar global brand with presence in over 100 markets.

Before Avon, she held top posts in companies like the retailer Neiman Marcus. In January 1994, she was hired to head the product marketing group of Avon US, and rose to become 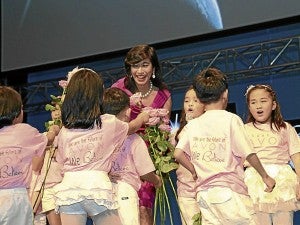 global president and chief operating officer. In 1999, at 40, she was appointed CEO, the first woman to hold the top post in Avon. She was elected chair in 2001. Eleven years into the job, Jung is the longest serving female CEO of a Fortune 500 company.

“You just have to work hard in a CEO job today whether you’re a man or a woman,” she says. “It started even before I became a CEO. There was more of a glass ceiling. I was lucky because Avon always believed that women should have an opportunity.”

Today, Jung believes the direct sales business model that Avon started 125 year ago is more relevant than ever, even in this age of mega malls and e-commerce.

“We’ve spent a tremendous amount of energy giving our representatives Web enablement, text enablement,” she says. “It keeps the company and the direct-selling channel modern.”

She says her visit to the Philippines 12 years ago was instructive. “I remember… everybody was texting way before it was even popular in the US,” she explains. “We believe very deeply that combining high-tech and high-touch is the answer, having relationship selling.”

She says that the Avon social network means that “the power of word of mouth means everything.”

“I think [e-commerce] is fantastic,” she explains, “but you can’t smell a fragrance online. If you look and there are 30 shades of pink and orange, it’s hard to pick out the right shade. It’s good for replenishment, but for that first trial, the first sample, person-to-person makes a difference.”

In her 11 years at Avon’s helm, Jung is prudent in naming her achievements. “My father sent me an article once that said the average tenure [for CEO] is three years,” she says. “It has been 11 years. It takes time to write a chapter, and change doesn’t happen overnight. We tried to change many things over the last decade to improve the image of the brand, to increase our market share in new categories.” 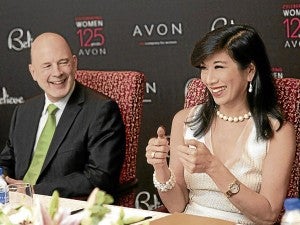 She adds, “We’ve introduced Avon self-leadership, an opportunity to increase the earnings of representatives which didn’t exist in the first 120 years or so. We’ve made progress on that. The work we’ve done in the Foundation when I became CEO, we’ve now raised $800 million. I didn’t do that; our people have done that in over 100 countries. Everybody understood the power of being one of the top companies worldwide, [and that’s] to give back. It takes time. But I’m proud.”

Jung repeats a mantra given to her by a mentor, which has been instrumental to her own success and fulfillment: Follow your compass, not your clock.

“It means to follow your heart and not your head. Do work that you love not for anything else. And it made a big difference [on me]. That’s why when I get the opportunity to mentor younger women or men who are coming into the business and they want to know what it takes, [I say] if you have two people with equal skill sets, and if one loves the company and loves the people, and for the other one it’s just a job… I know some of my peers who run even bigger companies but they don’t love the company and it’s just a job… The job isn’t easy but the good far outweighs the tough times if you have the passion for the work.”

She continues, “I had a boss very early in my career and he had a poster behind his desk with [an image of] a potted plant on it and it said, ‘Bloom where you’re planted.’ People used to come in and say, ‘I don’t like my boss, I don’t like this job, I’m bored.’ And he used to say, ‘Bloom where you’re planted.’ You will learn more from the tough times by sticking it through. Sometimes even if you have a tough boss, you will learn how you don’t want to act when you become the boss someday and those will be some of your best learning experiences… Some don’t understand that staying the course and sticking it through in a tough situation and succeeding on the other side are hugely important in developing leaders. It’s not always an easy path. Some may look at my resumé [and get impressed by it, but] it’s not always an easy path.”