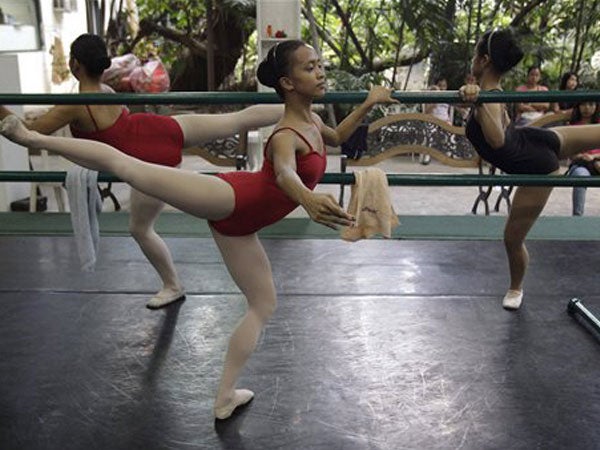 An unlikely ballerina emerges from a Manila slum

From this Manila slum of garbage collectors emerged an unlikely Cinderella: ballerina Jessa Balote who at the age of 10 was plucked out of her grubby life by a ballet school to prepare her for a life on stage.

In four years since her audition in 2008, Jessa has performed in various productions, including Swan Lake, Pinocchio, Don Quixote and a local version of Cinderella. She rode a plane for the first time in August to compete in the 2012 Asian Grand Prix ballet competition for students and young dancers in Hong Kong, where she was a finalist.

The 14-year-old Jessa’s unlikely success is as much a celebration of a unique effort by the Philippines’ most famous prima ballerina, Lisa Macuja, to help slum kids of Manila by providing them a scholarship and classical ballet training for six to seven years.

More than a quarter of the Southeast Asian nation’s 94 million people live in abject poverty, many in sprawling and unsanitary shanty towns like Aroma in the capital city. Despite a recent economic upturn, there are not enough full-time jobs. Education skills are lacking and incomes are low. At least 3,000 Filipinos leave their families behind every day to seek employment abroad.

Jessa, who would have likely followed her family to a life of garbage picking, had not much of a future to look forward to.

“I used to tag along with my father and mother when they collected garbage in the evening,” Jessa said in her home about the size of a shipping container with a small attic.

Her family would gather trash from houses in the nearby Quiapo district or rummage for scrap metal in the huge garbage dump not far from home.

That was until her successful audition for the Project Ballet Futures dance scholarship established by Macuja, founder and artistic director of Ballet Manila who is married to business

The outreach program of Ballet Manila—which runs a dance company and a school by the same name—initially accepted 40 students from Jessa’s charity-run school in Manila’s Tondo district dump site. Some dropped out, but new batches have been accepted.

Today, the program has 55 scholars, aged 9 to 18, from five partner public schools such as Jessa’s. They train daily after school along with 60 paying students.

“I can help my parents more with what I do now. I earn money from ballet,” said Jessa, sitting on a plastic bench in her shorts and t-shirt, her long hair loose. The slim teenager, perhaps so used to dancing on her toes, would often have her toes pointed at the wooden floor even while sitting during the interview.

Behind her, the plywood wall of the family shack was adorned with pictures of her in gossamer tutu on stage. Sharing the space were frames of ballet certificates and a newspaper clipping about the garbage picker-turned-ballerina. A pair of satin pointe shoes lay on top of a gym bag, a few meters (yards) from sacks of used plastic bottles and other garbage piled up outside the door of her cramped home.

Jessa and other kids are trained in the rigorous Russian Vaganova ballet and are required to keep up with their academics in school. They are provided a monthly stipend of P1,200 to P3,000 ($30 to $73) depending on their ballet level, as well as meals, milk and ballet outfits. They also receive fees of P400 to P1,500 ($10 to $37) for each performance.

Pointe shoes alone cost $50 to $80 a pair—a fortune for someone eking a living on $2 a day—and wear out within weeks or days, said Macuja.

The daughter of a former senior trade official, Macuja was 18 years old when she received a two-year scholarship at the Vaganova Choreographic Institute (now the Academy of Russian Ballet) in Saint Petersburg in 1982, where she graduated with honors.

She was the first foreign principal ballerina for the Kirov Ballet in St. Petersburg before returning to the Philippines, where she worked as artist-in-residence at the Cultural Center of the Philippines and a principal dancer at the Philippine Ballet Theatre.

Macuja, 48, founded Ballet Manila in 1994 with the aim of making the high art of classical ballet more accessible to common people. The dance company has held performances in malls, schools, town halls and remote villages of the archipelago. She set up the scholarship program in 2008 as a way of paying back for her good fortunes.

For Jessa and the other slum children, it opened a whole new world. Literally so, when she flew to Hong Kong for the ballet competition.

Her glee while on a roller coaster in Disneyland was captured in a photo in her humble home.

During the competition in Hong Kong, she said she often felt nervous and shy to be dancing among well-off peers. But she overcame her fear, remembering Macuja’s advice “to persist despite the odds and to not let poverty hinder me.”

As a company apprentice she makes around P7,000 ($170) a month, sometimes more, from stipend and performance fees. The money is not enough to lift her family from poverty, but ballet has given her a choice in life.

Her father, Gorgonio, works part-time as a construction worker besides collecting garbage. His meager pay is insufficient to feed his large family of six children and two grandchildren. One son works in a factory while another daughter collects garbage.

Jessa’s childhood dream is to become a school teacher. But she also wants to dance as a professional ballerina. She says she is challenged by the feisty acting and difficult dance turns of the Black Swan character in Swan Lake and aspires for that role.

For Jamil Montebon, another Project Ballet’s beneficiary, the scholarship was a life saver.

The troubled 18-year-old has left his broken family in a violent slum community not far from Aroma.

He became a ballet scholar at 13 but then dropped out of high school and ballet last year after a fight with his mother. During his time off from ballet and school, he collected garbage and worked in a junk shop. At night he would go drinking with other kids who often clashed with rival gangs, then sleep in a church where he got one free meal a week.

He was later accepted back into the program, which demands that children keep good grades and stay out of trouble. After shaping up, he moved into Ballet Manila’s dormitory.

“I think that the key really is that these kids have been given hope, and that hope will transform their lives,” Macuja said.