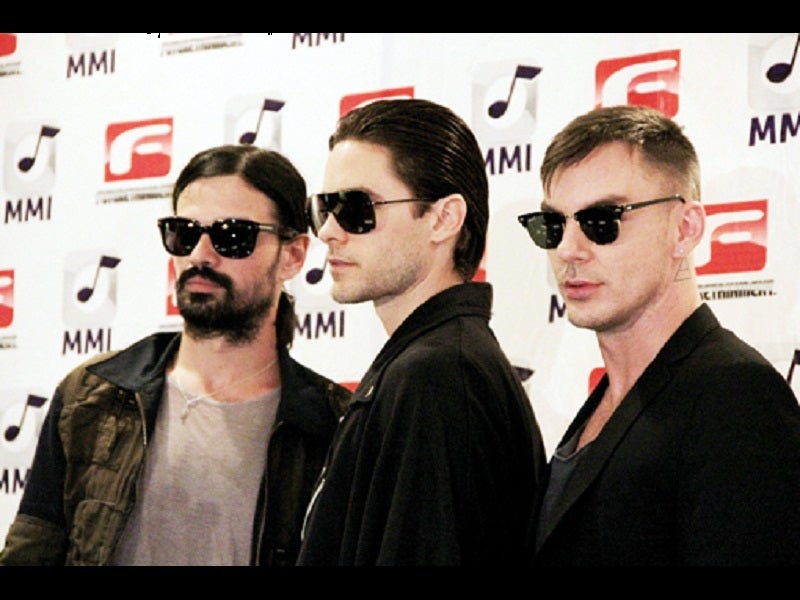 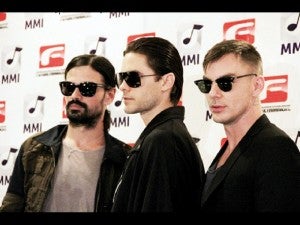 Huddled under umbrellas, the Mars Army Manila chapter waited with apprehension for the concert to start. The TriNoma Open Parking grounds weren’t as packed as it should be, with people seeking for shelter.

Even after front act Kjwan had warmed up the stage, the rain still hadn’t let up. Restless crowd, the risk of catching colds and the band getting electrocuted onstage … The night was a disaster waiting to happen.

The venue was suddenly plunged into darkness. Confusion quickly turned into euphoria as the band took the stage; veins pulsing rhythmically to the frenetic beat of Shannon Leto’s drum intro for “Escape.” Together with Tomo Milicevic’s searing guitar riffs, the frontman’s vocals pierced through the night sky. Nothing else seemed to matter but the music.

It was evident from the moment the lights hit his profile that Jared Leto possessed some form of primal magnetism that can make you forget about everything, except for this perfect moment where you become one with man and music and nature. With one word, he can make you do anything. He tells the crowd to march forward, and we obediently move in a single unit. If he says jump, we jump. But when he tells us to sing, we don’t—we scream our lungs out.

The set started with old favorites “A Beautiful Lie” and “Attack.” In the middle of “This Is War,” giant confetti-filled red balloons started dropping from the sky. It was a mind-blowing scene: Voices singing in unison, fists pumping defiantly in the air, raindrops sparkling against the dancing strobe lights. 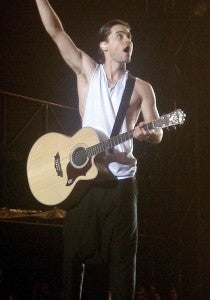 After Tomo and Shannon’s haunting “L490” guitar solos, Jared indulged the crowd with a heartrending acoustic set. But first, he surprised everyone with the Pinoy catchphrase of the season: “Philippines, ikaw na!” he growled before launching into the “Hurricane+Alibi” medley, and the crowd roared in appreciation. Jared’s vocals dipped and soared with raw, unbridled emotion; smitten females shrieked their response when he plaintively wailed, “Do you really want me?” during “Hurricane” and put a hand over his heart.

Then came the moment I’d been waiting for: Jared acceded to a fan’s request and decided to perform “The Kill.” It had been my personal battle cry while coursing through life as a jaded twentysomething, and I’d been itching to yell it out for years so that the whole world can hear. It was also Jared’s goal. “Sing it so loud that everybody in the world wishes they were right here in the Philippines,” he told us, and we did. When I screamed that line, “This is who I really am!!!” together with everyone else, it was as if I’d finally released all those years of pent-up stress in one cathartic howl. “That was pretty f—cking amazing,” Jared interrupted at some point during the sing-along, looking a bit stunned.

Jared invited some kids to join them onstage. “If you listen to ‘This Is War,’ this is really an album of peace, of freedom. It’s an album about living your dreams,” Jared explained before launching into the anthemic “Closer To The Edge.” The band had been building the momentum for their final performance of the night, and it didn’t disappoint. Confetti bearing cryptic fortune-cookie readings exploded above us; one landed on my head and read “Provehito In Altum,” the band’s Latin motto that roughly translates as “Launch forth into higher grounds.” And, with the encore “Kings And Queens,” we did just that.

Two hours, 14 songs, one incredible, unforgettable night. I closed my eyes, letting my senses soak it all in. The kids in the “Closer To The Edge” video had their moment; this was mine, and I wasn’t alone in this. I hugged my friends close to me; we couldn’t tell where the rainwater ended and the sweat and tears of joy began. It’s hard to put the experience into words, but it was the type of concert that left you breathless and sated and deliriously alive, one that you wouldn’t mind watching over again just so you could feel the same way every single time.