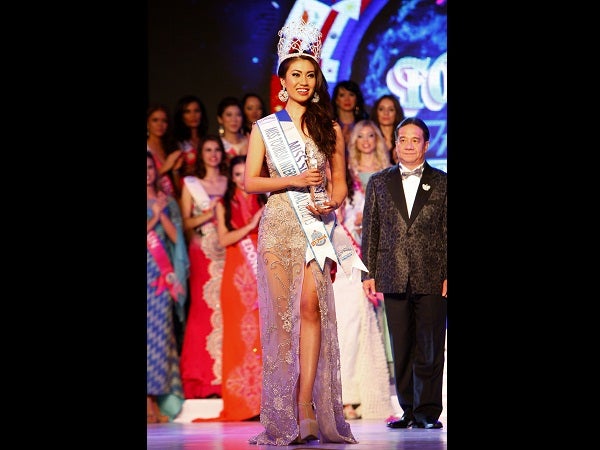 Miss Tourism Int’l: I thought I was dreaming

But Rizzini Alexis Gomez, who bested 55 other international delegates in the 2012/2013 Miss Tourism International in Kuala Lumpur, Malaysia, last Dec. 31, said her father inspired her to keep going.

“My dad always said, ‘If you want something, you have to hope, and hope for the best.’ So that’s it. I won the Mutya ng Pilipinas, and then I represented the country in the Miss Tourism International pageant,” Gomez told media men in her homecoming press conference at the Midas Hotel in Pasay City Friday afternoon.

Gomez, a registered nurse, missed the cut in the 2012 Binibining Pilipinas pageant and failed to make it to the final round of the 2012 Miss World Philippines contest.

“I felt that the crown was elusive. There were four subsidiary awards given before the finals and I didn’t get any,” said Gomez, a veteran of beauty contests at 22, noting that there were no indications she was favored or she would advance further in the competition.

When she received the Miss Sunway Charm award before the announcement of the Top 5 winners, she thought it was all she would bring home.

“When I woke up the next morning, I asked myself, ‘Did that really happen?’ I looked at my bedside table and the crown was there. ‘It did happen!’ I went to sleep again. When I woke up again, it was still there. I wasn’t dreaming!” Gomez said.

The 5-foot-8 beauty’s prize package included a 100,000 ringgit worth of scholarship at a university in Malaysia. (One ringgit is P13.46)

Gomez is expected to fly back to Kuala Lumpur to attend special activities in line with her duties as global tourism ambassadress.

Gomez is the second Mutya ng Pilipinas queen to bag the Miss Tourism International title, after Peachy Manzano’s triumph in 2000. Before Gomez, Barbie Salvador cracked the Top 5 in 2010 and was proclaimed Miss Cosmopolitan International.

Several other Mutya ng Pilipinas beauties advanced in the Top 5, including actress Sherilyn Reyes who placed fourth in 1995. Riza Martinez was fifth in 1994, Mellany Montemayor was third in 1998 while Racquel Uy placed second in 1999.