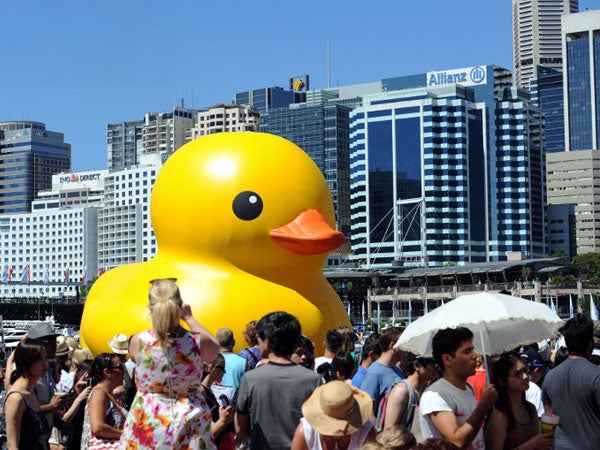 A gigantic, yellow rubber duck is floated into Sydney's Darling Harbour on Jan. 5, 2013 to kick off Sydney's annual arts festival, a celebration which combines high-art with popular entertainment. AFP

Each January hundreds of thousands of people attend theatre, music, dance, film, talks and other events for three weeks, often braving sweltering summer temperatures and thunderstorms for their dose of culture.

The 2013 festival, which will present 92 events from some 750 artists from 17 countries, kicked off Saturday under bright sunshine, with thousands lining Darling Harbour for the entry of artist Florentijn Hofman’s inflatable duck.

“And what better to celebrate that than with a really, lovely public art work such as the rubber duck.”

Bertels said the duck — a 15-metre high creation by Dutchman Hofman, models of which have appeared in other cities — appealed to the young and old, bringing back childhood memories for some.

“This is the Sydney duck and for him (Hofman) what’s important about it is that it is not just a playful thing but also one that connects,” Bertels explained.

“Because his whole theory around this, which is quite beautiful, is that all these harbours are connected to the local seas, and all these seas are part of one big ocean. So he says, well, really the whole world is one big bathtub.

“And what better way to celebrate summer than to have a giant bathtub party?”

Many Sydney Festival events, such as the duck’s arrival, are free and family-oriented to showcase the personality of Australia’s biggest city.

This year the big attractions will be a sexy Latino circus show from Circolombia and soul singer Sharon Jones and The Dap-Kings, but the January 5 to 27 festival will also present an interpretation of Handel’s opera “Semele” and encompass an exhibition of works by painter Francis Bacon.

Quirky events include a performance by an actor who will run a full marathon on a treadmill in front of spectators at Sydney’s Hyde Park while wearing gold sneakers and recounting an ancient Greek tale.

Sydney Festival was designed to bring life back into the city during the slow summer months. It first took place in 1977 and has since then grown to become one of the country’s largest annual cultural celebrations.

“For me, from my European perspective, what made it really unique is this amazing way where you can combine high art and entertainment and very popular stuff all in one festival which is something you don’t often do in European arts festivals,” said Belgium-born Bertels.