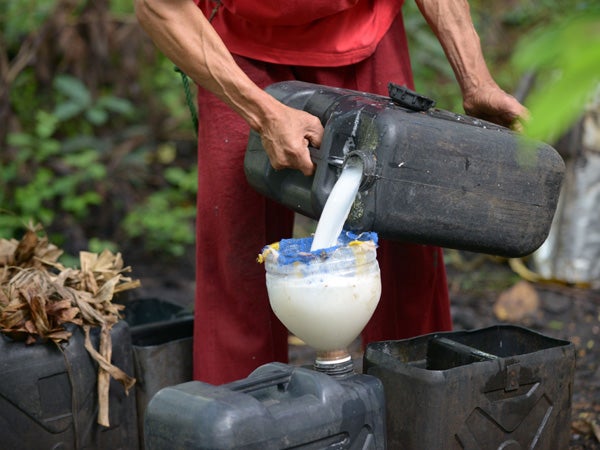 In this photo taken on November 15, 2012, tapper Eugenio Andaya, pours his harvest of coconut sap to be used in a local wine called 'tuba' the raw material for Lambanog in Tayabas, Quezon Province, south of Manila. With their huge copper vats and open fires, little-known backyard liquor makers have toiled for generations in Philippine coconut farms to distill the country's answer to Russian vodka. Extracted from the sap of the coconut, the "lambanog" was once considered a lowly peasant's drink whose potency they claim puts those of well-known liquors and spirits around the world in the shade. AFP / JAY DIRECTO

TAYABAS, Philippines – With their huge copper vats and open fires, little-known backyard liquor makers have toiled for generations on Philippine coconut farms to distill their equivalent of Russian vodka.

Once considered a lowly peasant’s drink whose potency is said to put other liquors and spirits worldwide in the shade, the “lambanog” is the Philippine version of coconut arrack also made in Sri Lanka and Indonesia.

“Many have compared it to Russian vodka or English gin but what sets our lambanog apart is that you don’t get a hangover,” said 65-year-old distiller Isabelita Capistrano.

The family-owned Capistrano Distillery in coconut-rich Tayabas is one of two leading Philippine makers of lambanog, which it sells to the country’s biggest supermarket chain.

“It is a very hard drink. Japanese and South Korean (tourists) especially like it. Americans find it too strong, but smooth,” said the former high school teacher.

But if drinking it is a challenge, making it is a high-risk pursuit that can lead to the death of those charged with climbing coconut trees to collect the frothy sap that is fermented to produce the drink.

“People have fallen and died or had broken bones,” said Eugenio Andaya, who has been climbing the trees since he was a teenager.

“It is a very difficult job but I just pray and leave my fate to the Lord,” he told AFP in a recent early morning visit to Tayabas, a sleepy, picturesque rural town about three hours’ drive from Manila.

Workers climb the trees without protective harnesses to prune the coconut flowers before they turn into fruits. The sap is allowed to drip into bamboo receptacles.

Like high-wire performers, the tappers navigate a network of bamboo bridges connecting the trees nine metres (30 feet) above the ground, with blades on their waists and bags tightly strapped to their shoulders.

Pruning is mostly done in the afternoon, and the climbers return at dawn to collect the liquid “even before the roosters crow”, said Andaya, 53.

Farmhands then deliver the sap to the distillery in big plastic containers that are carried behind their backs or on pack horses.

The sap is fermented into a local wine called ‘tuba’, which if distilled further, yields the colourless ‘lambanog’, with methanol as a byproduct.

Capistrano said the process of distilling the equivalent of coconut vodka was first recorded in Tayabas in the early 19th century.

Founded by Spain in the 1580s as part of its move to Christianise its Asian colony, Tayabas lies in the shadow of Mount Banahaw, a spiritual place where shamans live and where rainwater rushing down the slopes keeps the land fertile.

According to local lore, the first known Tayabas distillery was owned by a Spanish soldier named Alandy who settled in the area.

Alandy’s line is now produced by the rival Mallari Distillery, whose owners trace their ancestry to the soldier and who still maintain the original recipe of a drink with a 90 proof grade, which means it contains 45 percent alcohol.

While the Mallari Distillery remains in operation, the Capistrano family said it has taken a lead in promoting the drink abroad.

Lambanog remains a cheap, popular drink across the Philippines. But official data on how much income it generates domestically remains sketchy, with the beverage sold locally through neighbourhood shops that do not remit any taxes or reports.

In 2001 the government approached the Mallari and Capistrano houses and 14 other smaller lambanog distillers with a plan to develop the product for export.

The trade department said the drink had been slowly penetrating the beverage markets in Australia, Japan and Macau, though official data is unavailable.

It faces competition from Sri Lanka in particular, which targets Japan, South Korea and the Maldives with premium blends.

“We want the world to know that lambanog is the official Philippine liquor,” she said.