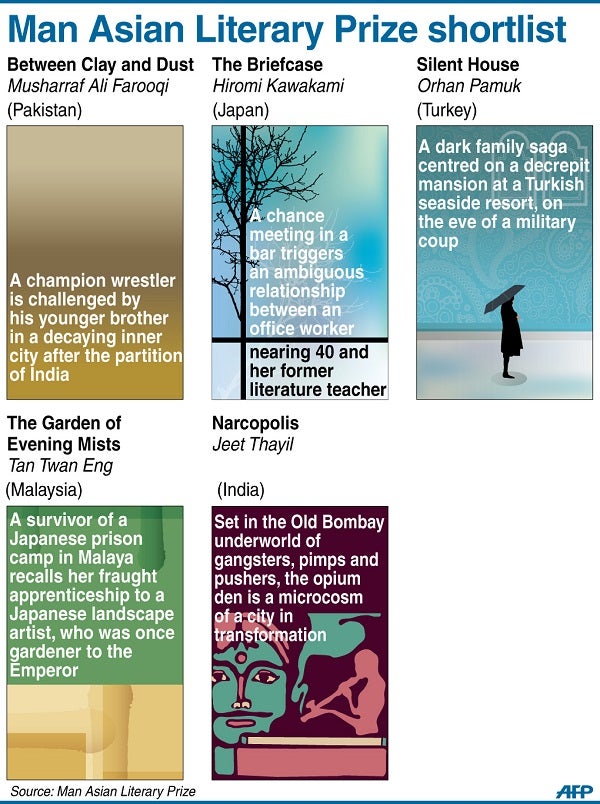 HONG KONG—The shortlist for the $30,000 Man Asian Literary Prize was announced on Wednesday. Here is a look at the five contenders:

— Between Clay and Dust by Musharraf Ali Farooqi (Pakistan)

Set in an unnamed Pakistani city after the partition of India, Between Clay and Dust was described by Prize judges as having “mythic resonance” in following a former champion wrestler and his younger brother.

Born in 1968 in Hyderabad, Farooqi is an author, novelist and translator who divides his time between Toronto and Karachi and has published both adult and children’s fiction.

His previous novel, The Story of a Widow (2009), was shortlisted for the DSC Prize for South Asian Literature. He is also the highly acclaimed translator of Urdu classics Hoshruba (2009) and The Adventures of Amir Hamza (2007).

— The Briefcase by Hiromi Kawakami (Japan)

Tracing the relationship between an office worker and her former literature teacher, The Briefcase won praise from the panel for its “delicacy and humor in a novel in which painterly gestures evoke passing time through the changing seasons.”

Born in Tokyo in 1958, Kawakami is regarded as one of Japan’s leading novelists. Her first book, a collection of short stories entitled God (Kamisama), was published in 1994. She was awarded the Akutagawa Prize for Tread on a Snake.

Set around a decrepit mansion at a Turkish seaside resort, on the eve of a military coup, the panel described Silent House as a “dark family saga” and “a brilliant comic satire on a nation’s drive for modernity.”

Born in 1952 in Istanbul, Pamuk is a Turkish novelist, screenwriter, academic and recipient of the 2006 Nobel Prize in Literature.

His novel My Name Is Red won the 2003 IMPAC Dublin Literary Award. His work has been translated into more than 60 languages. Silent House is his second novel, which in 2012 saw its first ever translation into English.

— The Garden of Evening Mists by Tan Twan Eng (Malaysia)

Following a young law graduate who discovers the only Japanese garden in Malaya and its secretive owner and creator, the panel described The Garden of Evening Mists as an “intricately layered” novel that “unearths beauty and atrocity within buried histories.”

Tan Twan Eng was born in 1972 in Penang before living in various parts of Malaysia throughout his childhood. He studied law at the University of London and later worked as lawyer in Kuala Lumpur.

Jeet Thayil’s debut novel has been hailed as hallucinatory exploration of the evolution of Bombay over three decades, with the opium den “revealed as a microcosm of a city in transformation” according to Man Asian Literary Prize judge Maya Jaggi.

Born in Kerala, India, in June 1959 and educated in Hong Kong, New York and Bombay, Thayil is a performance poet, songwriter and guitarist, and has published four collections of poetry.

Narcopolis was shortlisted for the 2012 Man Booker Prize for Fiction.