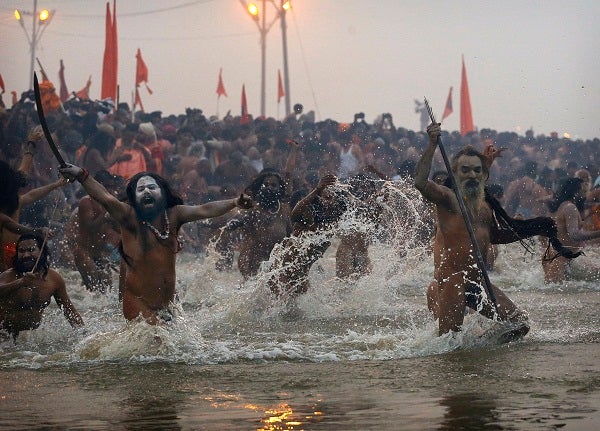 Indian Hindu holy men, or Naga Sadhus, run naked into the water at Sangam, the confluence of the Ganges, Yamuna and mythical Saraswati river, during the royal bath on Makar Sankranti at the start of the Maha Kumbh Mela in Allahabad, India, Monday, Jan. 14, 2013. Millions of Hindu pilgrims are expected to take part in the large religious congregation that lasts more than 50 days on the banks of Sangam which falls every 12 years. (AP Photo/Kevin Frayer)

Millions of Hindus bathe in Ganges to cleanse sins

ALLAHABAD, India— Millions of devout Hindus plunged Monday into India’s holy Ganges River in a ritual they believe can wash away their sins.

Monday is considered the most auspicious day of the Kumbh Mela, or Pitcher Festival, which lasts 55 days and is one of the world’s largest religious gatherings.

Over 110 million people are expected to take a dip at the Sangam, the place where three rivers — the Ganges, the Yamuna and the mythical Saraswati — come together at the edge of this North Indian city. There are six auspicious bathing days, decided by the alignment of stars, when the Hindu devout bathe to wash away their sins and free themselves from the cycle of death and rebirth. The festival continues until March 10.

About 50,000 policemen have been deployed to keep order at the festival, fearing everything from terrorist attacks to the ever-present danger of stampedes of pilgrims.

According to Hindu mythology, the Kumbh Mela celebrates the victory of gods over demons in a furious battle over a nectar that would give them immortality.

As one of the gods fled with a pitcher of the nectar across the skies, it spilled on four Indian towns- Allahabad, Nasik, Ujjain and Haridwar. The Kumbh Mela is organized four times every 12 years in those towns. Hindus believe that sins accumulated in past and current lives require them to continue the cycle of death and rebirth until they are cleansed. If they bathe at Ganges on the most auspicious day of the festival, believers say they can rid themselves of their sins.

Thousands of naked Hindu holy men known as sadhus began the day by running to the river and plunging in amid a cacophony of religious chants. Applause rose from tens of thousands of pilgrims waiting behind barricades as the heads of various Hindu monasteries reached the bathing points, called ghats, riding silver chariots or carried on silver palanquins, and accompanied by marching bands.