In this house, ‘the old and the new can coexist’ | Inquirer Lifestyle 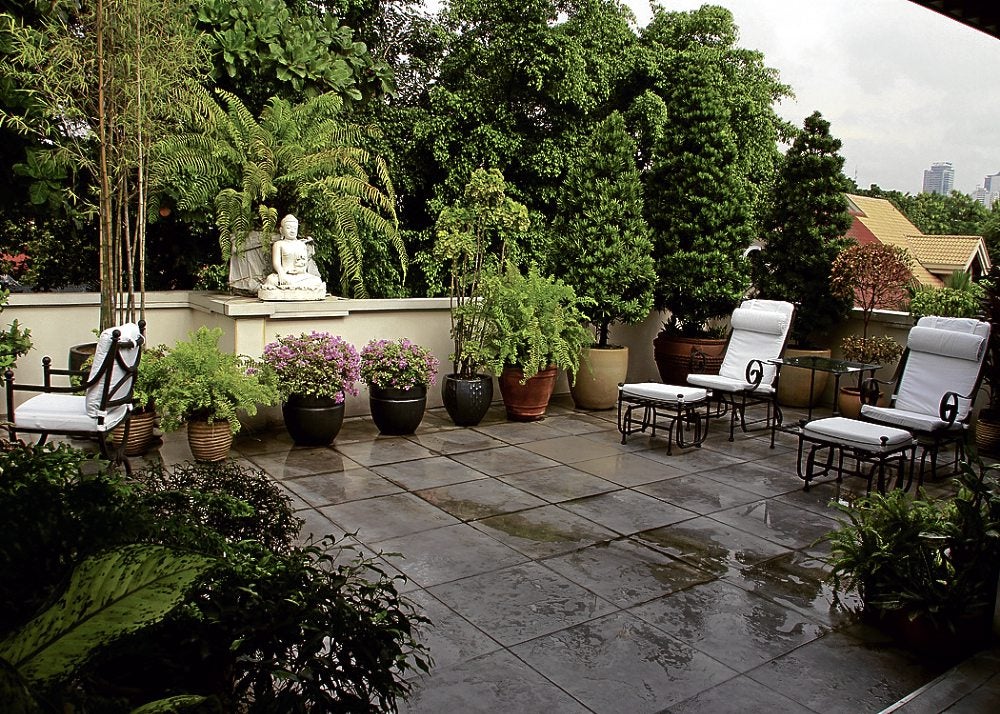 In this house, ‘the old and the new can coexist’

As their two sons were growing up, Joel and Eloisa Buse felt it was time to move out of their rented townhouse. While driving the boys to school, the parents took a shortcut through one of San Juan’s streets. They spotted an old house with a “For Sale” sign.

The Buses later learned from the house owner that the house was built in 1955. Back then, the lot—all of 280 sq m—cost only P17,000  since it was a mud hole for water buffalos. In fact, San Juan was still considered a suburb.

Typical of mid-century architecture, it had a split-level layout with a low ceiling. Deserted for years, the house had been covered by bougainvillea vines.

Upon inspection, the eldest son exclaimed, “It looks like the house in ‘Jumanji!” He was referring to the abandoned New Hampshire residence filled with creepers in the Hollywood fantasy movie.

For the Buses, the challenge was how to let their income match the rising costs of real estate and construction.  Joel is an entrepreneur, while Eloisa is the managing physician of Belo Medical Group.

When her boss, Dr. Vicki Belo, learned the Buses had plans to build their home, she offered Eloisa a loan.

The project became a complete makeover. The former split-level bungalow was transformed into a 600-sq m, three-level house with a double-height living room and a roof deck for entertaining.

At first, the Buses thought they could build a house by themselves. Joel bought a pirated program of home layouts to designate the space flow and determine the room dimensions.  But when the contractor told them he needed specifications for windows, door openings and other technicalities, they finally hired architect Vince Lozano.

“If we didn’t have the courage then, we wouldn’t have been able to build our house,” says Joel. Upon its construction in 2005, a bag of cement cost P90. Now the price has nearly tripled.

Then, there was the matter of deciding the look of the house. Lozano’s style was contemporary, while the Buses favored antiques and tradition.  “We collaborated so that the old and new could coexist,” says Joel.

The angular shell of the house and the large expanse of glass are distinctly modern. Yet, century-old bricks from a Spanish-colonial house in Nueva Ecija line the façade and the roof deck. When the antique bricks ran out, the couple gathered similar bricks from an ancestral home in Vigan.

“Bricks add warmth. That’s the feeling I get whenever I enter a house with bricks in any part of the world,” says Joel.

To attract positive energies, Joel heeded the advice of a geomancer. The main door, albeit the largest opening in the house, is angled toward the northeast to follow the pattern of the chi.

Eloisa recalls that in their previous townhouse, the door also faced the same direction. “It was lucky for us. Otherwise we wouldn’t have been able to build our own home.”

The parts of the house on the ground floor were distinguished by their levels. But it wasn’t the architecture, but the feng shui that dictated them. The dining room is on the elevated part, to raise the comfort level and promote quality conversation. It is also at the center of the house, where yin and yang energies meet.

The powder room is tucked away in a sunken area so as not to drain the chi or life force.

The geomancer also advised not to build a bathroom above the kitchen, as it will put out the hearth’s fire energy, and inundate the kitchen with bad vibes. This could block wealth and health.

Likewise, beds should not be above the kitchen stove.  It is said the stove’s fire energy could bring trouble.

An accent wall was originally made with crazy-cut stones, to which Joel’s Chinese aunts objected as it was considered disintegrated luck.  Instead, it became a textured wall with rectangular patterns.

Since Joel loves to cook, the kitchen and the roof deck are the busiest sections. The spacious kitchen has an island counter, a glass-door pantry and deep Corian countertops.

The roof deck, which is their outdoor room, provides a different dimension. It not only serves as extension of the house, but also opens up to uninterrupted views of the Ortigas skyline. During New Year’s Eve, they can enjoy the dazzling fireworks display all around Greenhills and San Juan.

Sheltered by a trellis and a flat roof, several seating areas are decked with rustic wooden and wrought iron furniture with cushions, making the spaces as comfortable as the indoors. Green accent walls, old bricks, antiques and framed artworks add visual interest. On the terrace, tropical foliage bursts from pots.

The deck has a grill and brick oven for their feasts. Joel enumerates, “We cook porchetta, paella, barbecue, steaks, pizza, pasta and Mediterranean cuisine.”

On decorating the house, the Buses favored Orientalia for its craftsmanship and uniqueness. They also found treasures in garages. When they were slowly furnishing their home, designers Ivy and Cynthia Almario offered their help. They positioned the eye-catching pieces in the living room, reupholstered the dining room chairs into bold red and brought the couple to designer Milo Naval’s showroom.

Naval’s contemporary living-room set, which was customized for them, looks better with their Asian finds.

Joel commissioned a painter to create a focal point for the living room. The artist visited the house and based his palette on the warm color scheme. He depicted a cellist and a pianist playing music to symbolize harmony in relationships. To top it all, a grand piano given by Dr. Belo as present is situated beside the artwork.

The couple has been collecting artworks, such as abstractions by H.R. Ocampo and Arturo Luz, Popoy Cusi, Manuel Duldulao, Carlo Magno and his signature old house, and Angel Cacnio and sculptures by Cacnio’s son Michael. They are partial to harvest themes since these denote prosperity.

Eloisa says a house that’s too modern tends to be sterile. Period and Asian pieces lend a touch of classicism, history and beauty to a contemporary environment. She says combining old and new makes the house more inviting.

Says the doctor, “Friends and my nurses keep asking, ‘When can we come back?’”