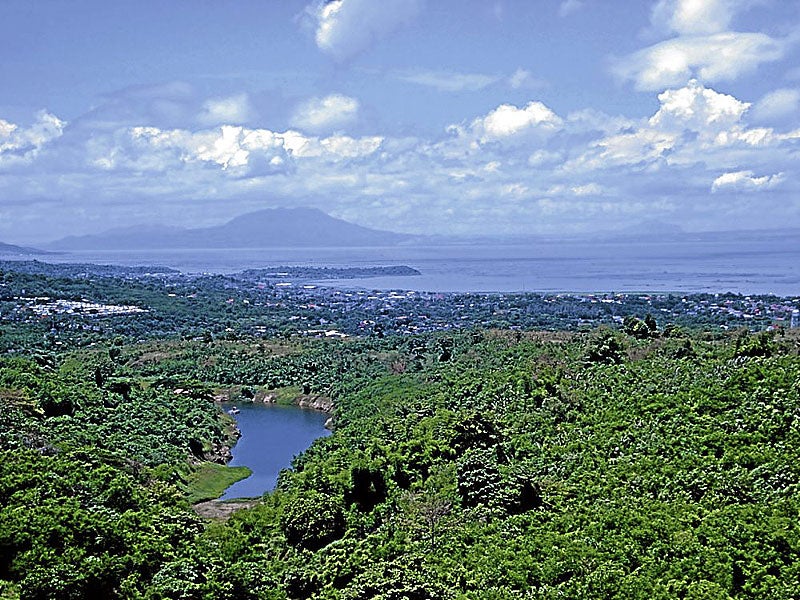 In search of Angono’s art treasures Instead of spending the last days of summer on the beach, we opted to explore one of the oldest towns of Rizal Province, Angono.

Established in the Spanish era as part of the Distrito Militar de Morong (Military District of Morong), Angono lies south of Cainta and Antipolo  and northwest of Binangonan. Its western shoreline meets Laguna de Bay.

The city was once a site of haciendas, where regular revelry was prohibited, except for the annual feast of San Clemente. This festival was freely celebrated with colorful masks of landlords made of papier-mâché, a tradition imported from Latin fiestas.

We left Quezon City at 8:30 a.m., passing along Cainta’s Manggahan floodway road and on to the short but scenic Taytay-Angono Coastal road.

We finally reached our first stop, Angono’s famous petroglyphs (rock engravings), located in the boundaries of Eastridge. With no signs pointing to it from within Angono, we spent time asking directions from tricycle drivers and locals.  There were no designated parking areas, so we just parked our car on a vacant lot near a tunnel. 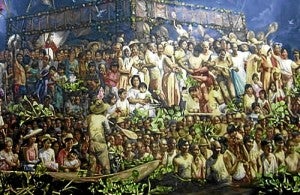 We followed a  sign made of cardboard leading to a dark tunnel  50 meters deep.  At the end was a short curved trail that led to a large sign beside a bus stop, which read: “Welcome, Angono Petroglyphs in Binangonan.” A tourist registration area was just beyond that,  with a single guide who briefed us on the history of the site.

One of a kind

Surprisingly, the rock art is one-of-a-kind in the country. It was discovered by the late National Artist and Angono resident Carlos “Botong” Francisco in 1965 during a Boy Scout field trip. It was told that this area was also used as shelter by Filipino guerilla fighters during  World War II.

The 120-plus pictograms depict animated figures, two of which look like turtles, pregnant geckos or, as the guide said, pregnant women. He also explained many of them resembled rituals of some sort. Of course, no one really knows what they represent, since there are no other related artifacts nearby that could help decipher its true message. 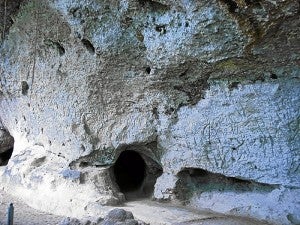 The site is significant since it holds part of our history that predates the birth of Christ. In 1985, the petroglyphs were included in the World Inventory of Rock Art under the auspices of the United Nations Educational, Scientific and Cultural Organization (Unesco), International Council of Museums (ICom), International Council of Monuments and Sites (Icomos), and International Center for the Study of the Preservation and Restoration of Cultural Property (ICCRom), under the Standard Rock Art Files (RAS), with other world famous prehistoric rock art.

A boardwalk runs alongside the rock shelter, protecting the rock art from deterioration caused by human touch and vandalism, such as the graffiti already carved into some parts of the wall.

The rock shelter is bounded by trees and vegetation, though most are not endemic to the area.  We saw an aloof bird, similar to a dollard or a myna, in flight but with a red accent in its underlining plumage.  Our guide said that there is a large kwago (owl) that frequents the area, too.

We were sweating in the sweltering heat, even if we were in the foliage shade. The  ringing of lunch bells prodded us to take our early lunch in town. Lunch was at the Balaw-Balaw (fermented shrimp with rice) Restaurant, established decades ago by a local artist, Pedrigon Vocalan, and his wife, Luzvimin. 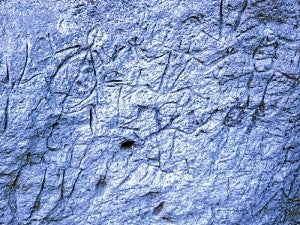 Although the place became famous because of its exotic menu like beetle larvae adobo, marinated frogs and crickets, we stuck to the more mundane fare and tried its minaluto, the Angono version of paella,  with fried chicken, grilled squid, kanduli (cat fish), tahong (green mussels), shrimp, red eggs, eggplant, and kangkong served on the side in a bamboo steamer lined with banana leaves.

The restaurant’s art gallery showcases Vocalan’s earthen-colored paintings and wooden sculptures, mostly illustrating Angono’s folklore and traditions, as depicted in his large painting of a San Clemente procession which  covers a wall of his gallery.

On the third floor is a studio filled with giant higantes, papier-mâché masks and figures. Vocalan conceived the rendition of the Higantes Festival, where  Angono’s barangays represent their local industry or character with Higantes figures.

After a hearty meal, we visited the studio of the late National Artist Carlos “Botong” Francisco. The studio has Francisco’s memorabilia, family photos, his work space, and a few prints of his murals. An exquisite lone wood relief of “Si Malakas at Si Maganda” hangs on the wall of his veranda.

Considered the greatest muralist in the country, Francisco became famous for his social realist murals displayed  in the lobbies of Manila City Hall, Philippine General Hospital, Sto. Domingo Church and the old Jai-Alai building, among others. 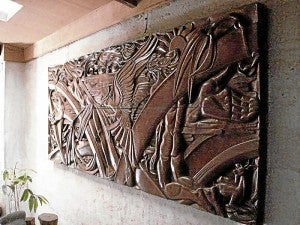 Due to the size of each of his projects, fellow artists and apprentices helped Francisco execute his murals.

Alongside Francisco’s studio is his grandson’s “The Second” art gallery, named after Carlos “Totong” Francisco II. The young Francisco is an abstract art painter, departing from his grandfather’s technique.

Our next stop was Jose “Pitok” Blanco’s Family Museum, a one-of-a-kind art gallery that literally showcases the talents of his entire family. The realistic pieces are displayed according to the artists’ progression, from their early learning, to more mature works,  close to those of master himself.

Like Francisco, some of Blanco’s large paintings required assistance from his family to complete. Sadly, according to the museum curator, not so long ago, the museum was burglarized, and several of Jose’s art pieces were lost. None has been found to this day.

Another gallery not to be missed is Nemiranda’s Art House, owned by the artist Nemencio R. Miranda Jr. Better known as Nemiranda, this artist is most famous for the impressionist mural of the Edsa revolution found in the Edsa Shrine as well as the Edsa II relief on its exterior walls.

Although Miranda  incorporates local folklore, traditions, and landscape in his works, his style is distinct from Angono’s and that of other masters.

Miranda decorated his gallery’s exterior and interior to highlight his paintings and sculptures, his children’s paintings, as well as other local artists’ works.  Miranda’s advocacy is to help Angono’s young artists pursue the tradition of the masters.

We made a final stop at the Pintô (door) Museum located in the Silangan Gardens in Antipolo. Founded by St. Luke’s medical director Dr. Joven Cuanang, the Mediterranean-inspired museum is actually composed of several galleries built on a hillside overlooking Metro Manila’s skyline.

Collections of Dr. Cuanang’s paintings and sculptures—all by Filipino artists—are displayed in the galleries and all over the landscaped area.

The  evolution of art in the province of Rizal, from the petroglyphs to the works of local artists, are precious testaments to our heritage.  They should be preserved, respected, and appreciated by all.

The National Commission on Culture and Arts (NCAA), Department of Tourism (DOT), Department of Education (DepEd), and the local government should continuously assess their historical arts and culture preservation  program. Our local communities and future generations will surely benefit from their efforts.

The government can start with accurate and visible signage, free from obscuring  vegetation and sponsor logos, and installed at regular intervals leading to these sites.