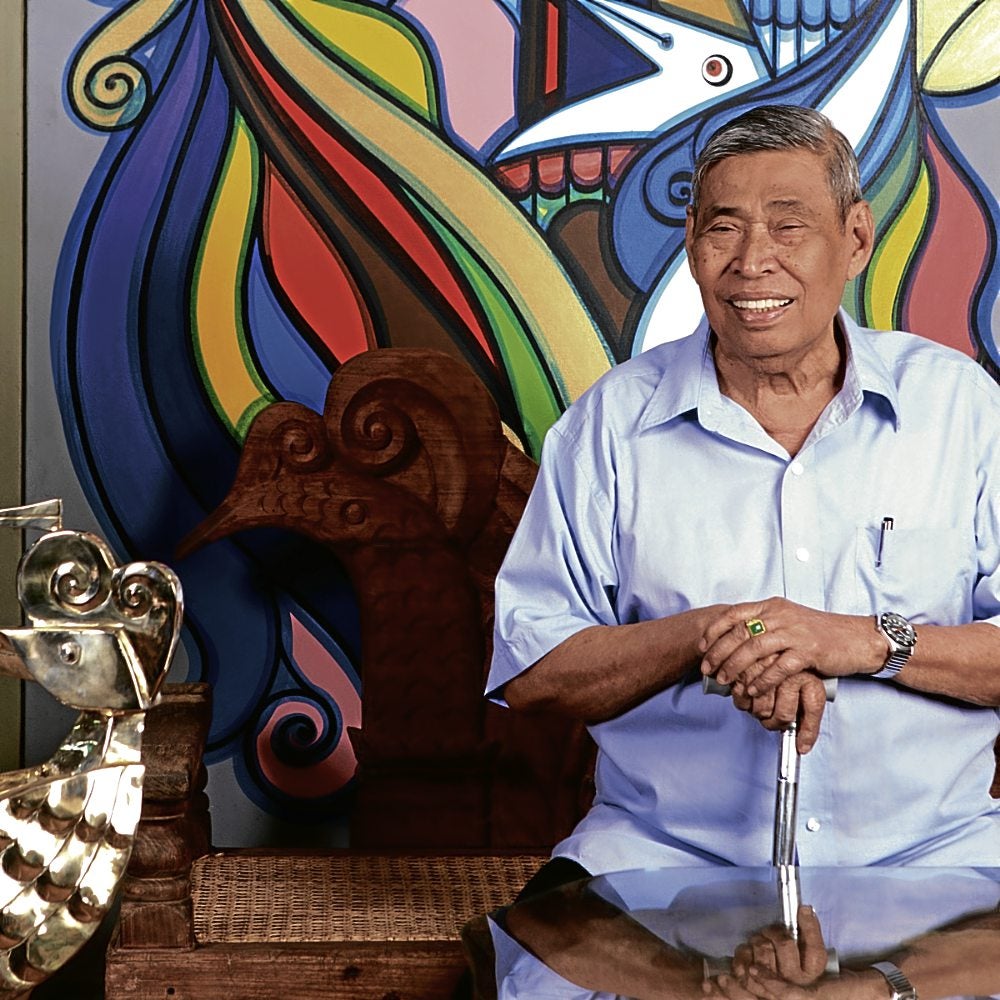 Abdulmari Imao is perhaps the most “Asian” of National Artists for the Visual Arts.

Born and raised in Sulu, Imao  celebrates his Mindanaoan heritage by drawing inspiration from Tausug and Maranaw art and lore, and from the richness of Southeast Asian  mythological traditions.

With his consistent and successful use of folk themes, myths and legends, his work strongly links Filipino, Malay and Indonesian cultures together.

Imao creates and assumes, both with his sculptures and paintings, Southeast Asian archetypes.

His most familiar motif, for example, the sarimanok, is essentially a link to that story of the rooster in the first of seven heavens. Aside from the belief that it brings good luck, the sarimanok, a bird whose vibrantly colored tail is believed to have been dipped in the rainbow, is said to be a messenger of the gods or the mythical lover of a datu’s beautiful daughter.

The motif persists in different Southeast Asian cultures—the serpent naga of Malaysia, for example. These regional thematic linkages set the practice of Imao apart in the Philippine art community.

On the occasion of the National Artist’s 77th birthday, Galerie Joaquin examines Imao’s navigation through national and regional mythologies through an exhibition of his latest works, “Mythical Realms,” which opens on Jan. 31 at Galerie Joaquin’s main gallery in San Juan.

The exhibition looks into three of Imao’s most iconic design themes: sarimanok, the sari fish and calligraphy.

In acrylic-on-canvas paintings and brass/wood sculptures, Imao revels in the bold use of bright colors, bold lines, and an abstract, stained-glass-window-like aesthetic sensibility.

His work featuring the sari fish acknowledges that he was once a fisherman.  Inspired by the colorful fish of Sulu Sea, he lets his imagination run rampant with the vivid colors he uses in his paintings.

Imao graduated from the College of Fine Arts of the University of the Philippines, where his teachers included National Artists Guillermo Tolentino and Napoleon Abueva.

As a Smith Mundt and Fulbright scholar, he received a Master of Fine Arts degree from  University of Kansas. He did postgraduate research at Rhode Island School of Design and Columbia University.

He became National Artist in 2006.

In a profile on Imao, the National Commission for Culture and the Arts notes: “Through his works, the indigenous ukkil, sarimanok and naga motifs have been popularized and instilled in the consciousness of the Filipino nation and other peoples as original Filipino creations.”

Abroad, his calligraphic brass sculptures and paintings are in the Philippine embassy in Riyadh, Saudi Arabia.

With his expertise, Imao has helped develop brass-casting technologies in other Asian countries such as Sri Lanka, Thailand and Indonesia.