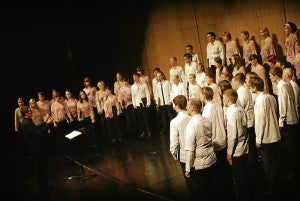 Manila’s choral enthusiasts had a magnificent choral treat from the world’s top choirs performing in the same venue, a rare encounter, a friendly interfacing that showcased each of their choral might.

The Cultural Center of the Philippines Main Theater was packed with enthusiasts and choristers who came in droves to witness this choral event of the year!

The friendly encounter marked the Slovenian Choir’s Manila debut, a concert that was eagerly anticipated.

Fr. Rolando V. de la Rosa, OP, Rector Magnificus of the University of Santo Tomas, in his short message dubbed this event as a “celebration of the beauty of various cultures through the power of music.”

Both the winningest choirs in their own right, the Slovenian and Filipino choirs, performing separately a bouquet of songs, engaged the audience in rapturous attention, whose mighty applause at the end acclaimed the institution of intelligent choral appreciation.

Both showed keen understanding of the art of choral singing. They showed thorough adeptness in phrasing, intonation, clarity of lines and tight ensemble work which brushed their singing with biting sensitivity.

The two choirs demonstrated what CCP president Raul Sunico called in his welcome remarks the joy of beautiful choral singing. 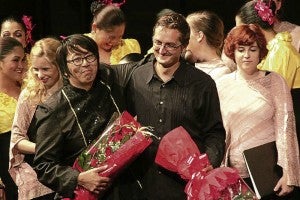 The guest choir intoned contemporary religious works in its first group of songs which included “Ave Maria” by Jaakko Mantyjarvi, rendered elegantly by the choir, underscoring its prayer-like simplicity which moved the audience to contemplative listening.
In the other group of songs, the choir acquainted the audience with sumptuous samplings of Slovenian folk songs a choir member fully annotated before their rendition.

Differences between the two were markedly noted. The guest choir was bigger, with members numbering a little more than 50 choristers.

The local choir was trimmer, with singers only about half of the former’s. This meagerness did not manifest at all in their vocal output, as the UST Singers produced a more robust web of choral sound than the guest choir’s.

Also, they differed in tonal production. The guest choir avoided a brighter placement, and carved out a dry production (secco, as the Italians would call it). The effect was telling. It sounded shrill, understating much vocal brightness, as contrasted to the fuller projection of the other choir. It is with this consideration that the rendition of the Slovenian choir of Kirby Shaw’s spiritual “Plenty Good Room” sounded rather bland.

Ed Manguiat, conductor of the UP Singing Ambassadors choir, said this production seemed current in Europe. He shared fond memories of how his choir competed with APZ Tone Tomsic Choir in the grand final for the much-coveted European Grand Prix many years back.

UST Singers chilled the spines of the listeners in reverence with their divine rendition of Nicholas White’s “O Magnun Mysterium,” which had soprano Ma. Pilar Charlene Ramos, an eloquent soloist.

It would have been a coup de grâce had she did the solo part of Francisco Santiago’s “Ano Kaya ang Kapalaran” (misprinted as “Ang Maya,” by Estella) to further reveal the even sheen of her agile light voice, especially in the brilliant solo part (cadenza). Soprano Rachelle Gerodias cut a seasoned presence as she sang the solo part.

One marveled, too, at the UST Singers’ superb rendition of Ruben Federizon’s “Gabaq-an.” In Calalang’s hands, the work attained glorious transformation as a dramatic piece, both in terms of vocal and choreographic brilliance.

We congratulate the University of Santo Tomas and the UST Singers for bringing in the Slovenian choir in Manila. More power to choral music!