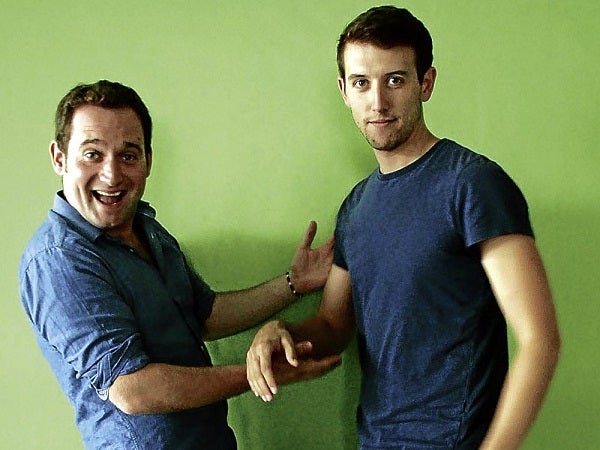 Potted Potter is back!

It’s Wednesday afternoon and Jesse Briton and Gary Trainor, the stars of Potted Potter, are squeezed into a cramped corner of Starbucks at the RCBC Plaza.

“Are you okay? Do you want to move?” I asked them.

“It’s okay, we like it this way. Because I love him,” Gary said, laughing.

It’s a good thing the actors get along—after all, they had to spend the past five months together, taking their show from the Philippines, where they kicked off their tour, to other parts of Asia, Australia and Africa.

“Potted Potter, The Unauthorized Harry Experience—A Parody By Dan and Jeff,” which was a hit in New York and West End, promises to let audiences enjoy all seven Harry Potter books in 70 minutes (and yes, almost all Harry Potter characters are played by just two actors). Writers Daniel Clarkson and Jefferson Turner also star in the comical show but since they were still performing in the New York production when the tour started last year, they held auditions and cast Jesse and Gary.

Their first season in Manila last August was a success. The show was a riot—a real treat for Harry Potter fans who wanted a hilarious Hogwarts experience. Getting to play Quidditch in the middle of the show was a bonus. The magic wasn’t in the props and effects—it was in Jesse and Gary’s chemistry and comedy.

Jesse and Gary are back for a rerun, ending the tour where they started and promising even more fun. “We’ve gotten more mischievous,” Jesse said.

We sat down with them just hours before the first show of the rerun and discovered that they are just as funny offstage.

How does it feel to be back in Manila?

Is it true you guys haven’t stopped touring since you were here?

Jesse: We just kept going and going. It’s just a fantastic privilege. I feel very lucky to be doing the job that we’re doing. What’s wonderful about that is we get to meet lots of different people and lots of different audiences. We’ve played for audiences in Africa, across Asia and in England as well. And the audience in Manila, without sounding sycophantic, is just completely different to any other audience.

G: Second to none.

You see a difference in the way the audience reacts to the show in each place?

Did you ever get to watch Jeff and Dan’s show?

G: We’ve never seen it live. We’ve seen a video of it. But I think in a way that’s better because we’ve been able to make the show completely our own.

What’s the most challenging thing about the show?

G: Now the challenge is keeping it together. We know the show so well that we just go off in weird and wonderful places which in a way we can’t do because we still have to honor the show. There is temptation to go off on tangent here, there and everywhere but to we have to keep the reins on it.

Were you fans of the books before being cast?

J: Gary and I often say that we’re the generation that grew up with the books. We’re both very fluent in the books but Gary is much more …

J: Gary’s read them all.

J: Gary’s an actual expert on it in real life.

Harry Potter fans are really protective of the series. But why do you think people have embraced this parody?

J: I have a theory about this. Reading the books, the books exude such a sense of warmth and good humor about them. And there’s comedy in the book as well. Really strong comedy. The books are able to have fun with itself.

G: It laughs at itself.

J: Anyone who is a fan of the books already has a sense of that. I don’t think we’re doing anything vastly different. We’re enjoying what the books do and are playing around with it. If you’re attracted to the books, you’re probably attracted to having a good time and having a laugh as well.

G: People have such an image of who the characters are especially from the movies. Emma Watson is Hermione and when Jesse does his version of Hermione, it’s just bizarre. There’s no way you can’t laugh at that. It just breaks down those barriers.

Has J.K. Rowling seen the show?

G: She hasn’t. There was a rumor she wanted to see it years ago when the show was in Edinburgh and Jeff and Dan were doing it. But the rumor goes that she was turned away from the box office because they didn’t recognize her and they told her it was sold out. From then on there was always one seat available for her. If she’s in Manila, we’ll sort her out. (laughs)

G: Mine has changed over the last six months and after reading the books again. I love Professor Slughorn for some reason.

G: He changes into a sofa.

Who’s your favorite character to play?

G: I actually like Draco Malfoy for the two seconds that I play him.

What about you, Jesse?

J: I really enjoy playing Dumbledore. Dumbledore’s the one where I really push it and find the limit.

That’s great, you still get to surprise each other.

J: (Turns to Gary) Close your eyes for this one. That’s one of the real joys when you’ve got somebody who you enjoy working with so much.

J: I didn’t actually say you were amazing. (laughs)

G: He meant it. (laughs) It was the underlying subtext.

Do you only pick kids to join you onstage?

J: Sometimes I like to pick a muscly guy and then a tiny little girl. And it’s really funny. Ninety-nine percent of the time, the little girl is more vicious than the big guy.

How hard is it to keep a straight face?

How many Chocolate Frogs do you bring with you on tour? Do you ever run out?

J: We maybe ran out once but we had Every Flavour Beans.

Do you ever get tired of the show because you’ve done it so many times?

J: Honestly, no. There have been days when I’ve been really tired but as soon as I start the show, it’s just such a fun show to do.

G: And you want the people to have a good time. I think that’s the biggest thing. And the great thing about Manila, they just give it for free, they are just so warm. We rely on the audience so much. In a way they are like the third character of this show. There have been a few places we have been to where they warm up to it but in Manila, what we noticed the last time was they give it for free and that’s just fantastic.

You have no understudies. Have you ever gotten sick while on tour?

G: I did, a week after we left Manila. I was sick for ten days. I got massive tonsillitis, fever. I still had to go on. I had to do 12 shows that week with a raging fever.

What’s the most unforgettable thing a fan has said to you after a show?

G: The last time we were in Manila there was a guy who collapsed on the floor. But I think it’s because I knew someone who was in Doctor Who.

J: People offer to have our children too sometimes.

Who do you think’s funnier?

J: (points to himself)

G: The uneducated eye would say Jesse (Jesse laughs) because it’s right up in your face, right up in your grill. I have subtle nuance that takes years of craft. (leans closer to the recorder) First class BA honors degree in Acting at The Italia Conti. Classically trained.

Do you see yourselves working together again?

What do you love the most about being in this show?

J: How much fun it is and being able to play with an audience. Those points where the audience really get involved, you have no idea what’s going to happen. It’s kind of terrifying but kind of exhilarating as well. It’s rare to get that in a show and I really really love that.

G: I agree with that. Just the unpredictability of the audience as well. We invite them in so much that they feel as if they’re allowed to just shout out things.

What was the best Quidditch match you watched?

J: We’ve had some really violent ones. There was one in Johannesburg. There was a married couple who were on different teams and the husband got the quaffle and tried to run to the other side and his wife blocked him with her chest and they scuffle and the whole audience is going, “Yeah yeah yeah!” That was a fun one. I loved it, it was amazing. We’ve had some incredible seekers as well. They’ve been astonishing and so funny. Little girls who have attitude. It was just hilarious. Really funny.