Painter draws portrait of Blas Ople with many thanks | Lifestyle.INQ ❮ ❯ 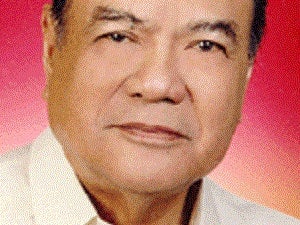 Painter draws portrait of Blas Ople with many thanks

(Editor’s Note: The author is one of the country’s leading painters. Blas Ople held numerous posts including labor secretary and foreign secretary. In 1975, he was elected president of the International Labor Organization, the first and only Filipino to hold that post.)

I have traveled to many places, met a lot of people, got accolades for my works and—a lot of times—made my country proud. But through it all, I lived by this credo: “Never forget your roots and be grateful to the men who have molded you to become the man that you are now.”

Among these people is someone I have developed a lifelong appreciation for: Ka Blas Ople, who would have been 86 years old today (Sunday).

We were called the Medis Bldg. Group of Calle Real Street in Intramuros. With Mauro Malang as art consultant, Hugo Yonzon Jr. as art director and myself as designer and layout artist, we put our publications for the projects of Ka Blas and later on for the Department of Labor under the administration of President Ferdinand Marcos. Ka Blas was the labor secretary and his office was also in Intramuros.

The labor department was my favorite place to visit because I loved talking to Ka Blas and I admired looking at his favorite paintings hanging on the walls. One was an oil painting of Hugo Yonzon Jr. titled “Battle of Tirad Pass,” which depicted a young Gregorio del Pilar riding his horse while battling American soldiers. The other was done by Rafael Asuncion called “The Pier Kargador.” Mila Cruz, Ka Blas’ most trusted secretary, told me he carries these two paintings wherever he holds office.

I’ve mused on the possibility of the paintings reminding him of the time when he was a young lieutenant during World War II, when he was a member of the Bulacan Military Area in the Battle of Kiangan.

After the war, he worked as a kargador (porter) at the North Harbor Pier to support his studies in Manila. He was a self-taught gifted writer, proficient both in English and Tagalog and armed with only his Montblanc pen and an old IBM typewriter.

I will never forget his fatherly advice to read more books to polish my English, to learn history and be up-to-date with current trends and events.

I was leading a double life at that time, working regular hours in Ka Blas’ office and honing my artistic skills at night. I started with pen and ink drawings and later, joined the Saturday group of artists at Tasa de Oro Restaurant in Roxas Boulevard.

It was my association with Mang Cesar Legaspi, Ding Roces, Justin Nuyda and Romy Vitug during those on-the-spot painting sessions at Barrio La Huerta in Parañaque that initially encouraged me to be a full-time painter. However, it was Mang Enteng Manansala and Ka Blas who made me finally decide to take a leave from the Medis office and concentrate on my paintings.

I also got an added boost from Mr. Malang and Mr. Yonzon who gave me their blessings and approval to become a full-time professional artist.

My association with Ka Blas did not stop there. Once in a while, he would ask me to design his personal greeting cards, a task that would evolve into interesting and fruitful conversations that enriched my knowledge.

During the early ’80s, Larry Cruz hired me as a part-time art director of Archipelago Magazine under editor Leo Benesa, an art critic. It was a big opportunity for me to be a part of a cultural and highly regarded magazine distributed nationwide and in Philippine embassies all over the world.

In 1985, when Ka Blas was chair of the Philippine-Russian Friendship Society, he endorsed me to put up an exhibition of paintings in Moscow and Vilnuis, USSR. To my surprise, it was the former First Lady Imelda R. Marcos who opened my show.

In one of my solo art exhibitions abroad, I was witness to Ka Blas’ high regard for the common soldier. In October 2001 in Budapest, when he was an official guest of the Hungarian government, he made quite an impression when he and Ambassador Estrella Berenguel offered some flowers to the monument of Imre Nagy, a leader of the Hungarian Resistance who was killed during the revolution against the Russians in 1956. His hosts were impressed that Ka Blas knew the story of the Hungarian statesman, which was so inspiring to him that he volunteered to lay a wreath on his monument, a gesture uncommon in the Hungarian milieu. It earned Ka Blas, the Philippine government and the Filipino community respect and admiration from the Hungarian government.

His hunger for knowledge of a nation’s history and his personal concern for Filipino workers, especially those who toiled overseas, made him one of the most admired diplomats during his term as secretary of foreign affairs under President Gloria Macapagal-Arroyo’s administration. Having been a stevedore once, he never forgot where he came from.

I am very proud and honored that Ka Blas discerned and acknowledged my talent as a painter during my younger years. Truly, I owe him. I salute him as a man for all seasons.