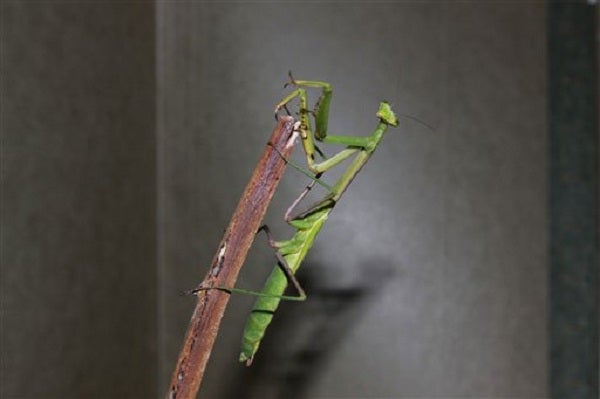 This undated photo provided by Yen Saw shows a Larger Florida mantis, Stagmomantis floridensis, in Katy, Texas. Saw has been keeping mantises for nearly 10n years, since his son got interested in them. One interesting aspect of keeping insects is that in a limited space and over a short time you can breed many generations. AP/YEN SAW

Children are fascinated by insects, but many of us eventually grow out of wanting to catch a firefly and keep it in a jar. For the people who never lose that urge, though, it can lead in directions that might be surprising.

Used to skeptics, enthusiasts will explain that not all cockroaches are created equal.

Orin McMonigle is author of more than a dozen books on keeping pet insects, produces a magazine for hobbyists and even has a species of roach named after him. He doesn’t like vermin scurrying about his kitchen any more than you do.

The most common pet roach is the hissing cockroach, 2 to 3 inches (5 to 7.6 centimeters) long. Its name comes from the sound it makes when disturbed, although it may lose that habit when it gets used to being handled. Hissers make a good display not only due to their size, but also because they don’t instinctively hide.

If one were to escape, McMonigle says, the only danger would be to the insect itself. Hissing cockroaches can’t survive on their own in the typical home, where the temperature and humidity are unsuitable and they can’t find food.

“If you let a thousand hissers loose in your house, they’re not going to do anything,” he says. “There’s over 4,000 species of roaches, and only about 25 are classified as pests, and only five of those are any good at it.”

A parallel might be to an escape by guinea pigs, he says: Just because they’re related to mice doesn’t mean they can take up residence in your walls and start breeding.

Hissers aren’t the only roaches kept by hobbyists, and McMonigle says there are even species that only exist in captivity. One mutation with white eyes, originally discovered in a deep coal mine, has been bred since the 1940s. Another species that was found only around a cave that was destroyed by mining is extinct in the wild.

If you’re still not convinced about roaches, McMonigle notes that their closest relative is an insect that many people love: the praying mantis.

Yen Saw of Katy, Texas, has been keeping mantises for nearly 10 years, since his son got interested in them. “But then he conveniently left the hard work to me and I got hooked,” Saw says.

With insects, you can breed many generations in a limited space and over a short time. And unlike more conventional pets, they don’t just get larger as they grow, but metamorphose through several different forms.

“I love the process of seeing them growing,” says Saw.

Owners of some kinds of insects can also observe a natural behavior that might be too gruesome with other pets: predation. Insect keepers typically raise insects to feed their insects—in fact, Martin started out keeping spiders and raising roaches as food, before getting interested in the roaches for their own sake.

Mantises, despite their charm, are hunters, and have no mercy even on their own relatives. When asked how many mantises he has right now, Saw laughs and says, “The number keeps changing because praying mantises, as you know, they eat each other.”

Since hundreds hatch at a time, this behavior helps keep the size of a collection manageable. It’s also one of the insect’s claims to fame: The female has a habit of eating the male’s head after mating, although the frequency of that has been exaggerated, Saw says. He’s watched mantises breed many times, and says, “The males are really careful trying not to lose their heads.” And in captivity, the risk can be minimized simply by feeding the female first, so she’s not hungry.

If you doubt how devoted a person can be to what others consider creepy and crawly, here’s one last fact about Saw: When he started to develop allergy symptoms and his doctor diagnosed an allergy to roaches, he realized that also meant he was allergic to his pet mantises. “It was devastating for me,” he said.

But that didn’t stop him. Now, he says, “when I go into my insect room, I have to wear a mask and gloves. But I love my hobby so I’ll do whatever I have to.”