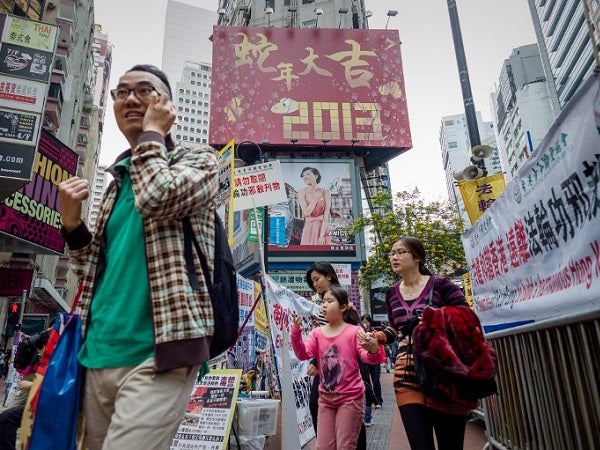 Pedestrians walk past a billboard set up for the Chinese New Year of the snake in Hong Kong on February 5, 2013. AFP

Those who make predictions according to the study of feng shui — or literally “wind-water” — are influential in many parts of Asia where people adjust their lives or renovate houses and offices based on the advice.

As they bid farewell to the Year of the Dragon, the fortune tellers warn that the “black water snake” that emerges to replace it on February 10 — the first day of the Lunar New Year — could be a venomous one that brings disaster.

Previous Snake years have been marked by the September 11, 2001 terror strikes that killed nearly 3,000 people, the crushing of the 1989 Tiananmen pro-democracy protests and the Japanese attack on Pearl Harbor in 1941.

The 1929 stock market plunge that heralded the Great Depression also occurred in a snake year.

Hong Kong’s celebrity feng shui master Mak Ling-ling predicts the stock markets will enjoy a smooth first-half before becoming turbulent in the second half of the year, which she links to the characteristics of the reptile.

“It’s just like the movement of snakes — fast, aggressive and sharp, but cunning and tricky at the same time,” she tells AFP.

Mak warned that despite early market optimism there would be no full recovery in the crisis-hit eurozone, while the economy of the United States would not gather a strong pace until 2014.

She added that President Barack Obama needed to “be less conservative” in his attempts to revive the economy.

Astrologers say this year’s snake is identified with the element of water — symbolizing fear — that sits on top of the fire element, representing joy and optimism. They say conflict between the two will bring turbulence in May.

“This is a disaster year… a lot of things will not go smoothly,” said Singapore’s “Grand Master” Tan Khoon Yong of geomancy consultancy Way OnNet Group.

“The European Union may split, the euro may be in trouble,” the 59-year-old said, adding that the bloc would be threatened by division in May.

Hong Kong astrologer Chow Hon-ming said a disharmonious May would see an ongoing dispute between Japan and China possibly escalate into a “brief” war, as two “snakes” are going to clash according to his reading of the Chinese almanac.

“May is known as the ‘snake month’ and it’s the Year of the Snake so between May 5 and June 6, these two snakes will meet.

“This is why things will be very intense between Japan and China. Tensions will rise to a peak and they will possibly go to war.”

Chinese fortune telling is based on ancient philosophy and belief dating back thousands of years that events are dictated by the different balances in the five elements that make up the universe: metal, wood, water, fire and earth.

A person’s fortune can be calculated by using the exact time and date of his birth, with the relationship of each of the elements.

The lunar calendar is based on the cycles of the moon and associates each of the 12 years forming a rotating cycle with an animal — with the snake assuming the sixth position out of the 12 animal signs.

China’s new leader Xi Jinping and “Gangnam Style” singer Psy, two of the most famous people born in the Year of the Snake, will see success despite entering a year matching their Chinese zodiac, usually considered to be a bad thing.

But China’s Xi, born in 1953, and 36-year-old South Korean pop sensation ‘Psy’ Park Jae-Sang will be spared, due to their favorable birth dates and elements.

While the 60-year-old Chinese leader is set to see a smooth leadership transition in March from predecessor President Hu Jintao, there may however be the odd bump in the road.

“He needs to watch out for his health. He might suffer a fall in November if he travels,” Chow said, recommending Xi avoids “Europe or Russia” that month.

CLSA, one of Asia’s leading brokerages, creates its own tongue-in-cheek annual “feng shui index”. This year it states that while stock markets will be volatile in the second-half, the presence of the market-driving “fire” element gave reason for optimism.

“We’ve got the fire element so we’re pretty hopeful,” CLSA analyst Mariana Kou said, predicting this year markets will have a “decent finish” this year.

Past Snake years give little encouragement, with the three most recent ones seeing Hong Kong’s Hang Seng Index finish down, falling 33.5 percent in 2001.