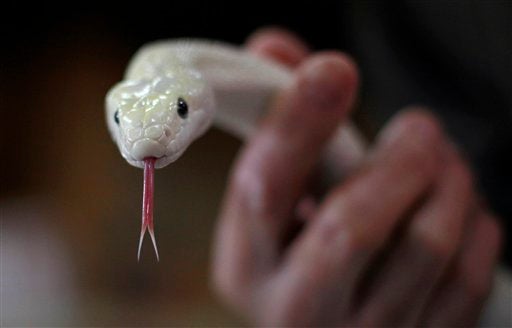 In this photo taken on Wednesday, Jan. 9, 2013, ahead of the upcoming Chinese lunar new year of the Snake, following the the Chinese zodiac, a genetically modified, auspicious, white snake is displayed at the altar at the the Temple of White Snakes in Taoyuan county, in north western Taiwan. Director of the temple Lo Chin-shih said the new year of the snake would be a time of steady progress, in contrast to the more turbulent nature of the outgoing year of the dragon. The Chinese new year fall on Feb. 10. AP Photo/Wally Santana

Chinese world worries that Year of Snake may bite

TAIPEI, Taiwan—As Indiana Jones might say: Why did it have to be the Year of the Snake?

When the Chinese-speaking world ushers in its new year on Sunday, its 12-year zodiac will turn from the dragon to one of the world’s most despised animals. As undeserved as the snake’s reputation might be, its last two years did not go so well: 2001 was the year of the Sept. 11 attacks and 1989 was when Chinese forces crushed pro-democracy protests around Beijing’s Tiananmen Square.

Some wonder if this one also could hold bad tidings. “In Chinese mythology, snakes were often associated with monsters, or with incarnations of monsters, so some political turbulence can be expected,” said Taiwanese astrologer Tsai Shang-chi.

Chinese New Year remains the most important festival in the region, a weeklong round of family reunions, temple visits and gastronomic excess. It is Mardi Gras, Christmas and the Fourth of July rolled into one, marked by the clacking of mahjong tiles and explosions of firecrackers. With businesses and markets hermetically closed, it brings a rare calm to the otherwise frenetic pace of what is arguably the world’s most dynamic economic region.

In China, some couples have apparently been trying to schedule their pregnancies to avoid having children born during the snake year, in contrast to the coveted Year of the Dragon.

In Beijing, a manager with the government office that arranges appointments with obstetricians said there was a noticeable drop in appointment requests compared to those received as the Year of the Dragon approached, though she offered no firm statistics. She spoke on condition of anonymity because she was not authorized to speak to the press.

For souvenir makers, snakes have been a tough sell.

“Last year, our business was a lot better, because everybody loves the dragon, whatever his or her animal sign,” said Lin Peixiang, who owns the Beixiang Souvenir Factory in the city of Wenzhou. “This year, business is a lot worse, because only those born in the year of the snake love the animal. The snake sign is a symbol of fear. People get scared when they see or hear the snake.”

But if many fear the snake, some astrologers and masters of feng shui, the Chinese art of arranging objects and choosing dates to improve luck, also see good signs for 2013.

Hong Kong feng shui master Raymond Lo is trying to put a positive spin on the year. He points out that according to astrological tables, this year’s variety is the relatively mild “morning dew” type of common water snake, less venomous than recent predecessors.

“It’s more moderate, humble and patient,” Lo said of the 2013 snake. He added that he is bullish on the year’s prospects for the world as a whole, and sees good opportunities for economic growth.

Still, Lo said, people should probably take precautions against the snake’s traditionally destructive power, perhaps by wearing monkey pendants around their necks. That goes double for anyone born in a year of the snake, he said, like incoming Chinese leader Xi Jinping. Xi’s 1953 birth coincided with the final convulsions of the Korean War.

“The monkey is the only animal that really knows how to handle the snake,” Lo said.

Tsai is also largely upbeat on the new Chinese year. He believes much-needed liquidity will be injected into struggling world economies, and that babies born over the next 12 months will be both self-motivated and agile.

On the downside, he warned, there could also be massive flooding and tsunamis.

The New Year’s season is implacably festive, and people have been out in force in cities across the region in recent days, stocking up on provisions and traditional new year symbols.

In Taipei, revellers were particularly enamored of snake-shaped paper lanterns supplied by the municipal government, as well as coins imprinted with snake logos and snake-like toys thought to bring good luck.

At the Temple of White Snakes in suburban Taoyuan county, director Lo Chin-shih presided over a glass-encased display of dozens of slithering snakes, replete with flashing pink tongues and slowly molting skin, a symbol of change, renewal and hope for a better future.

Lo said this snake year will be a time of steady progress, in contrast to the more turbulent nature of the outgoing dragon year.

“Unlike dragons that make abrupt, attention-getting moves, snakes take slow and steady steps,” he said, making it clear he considers the hiss of the Year of the Snake worse than its bite.