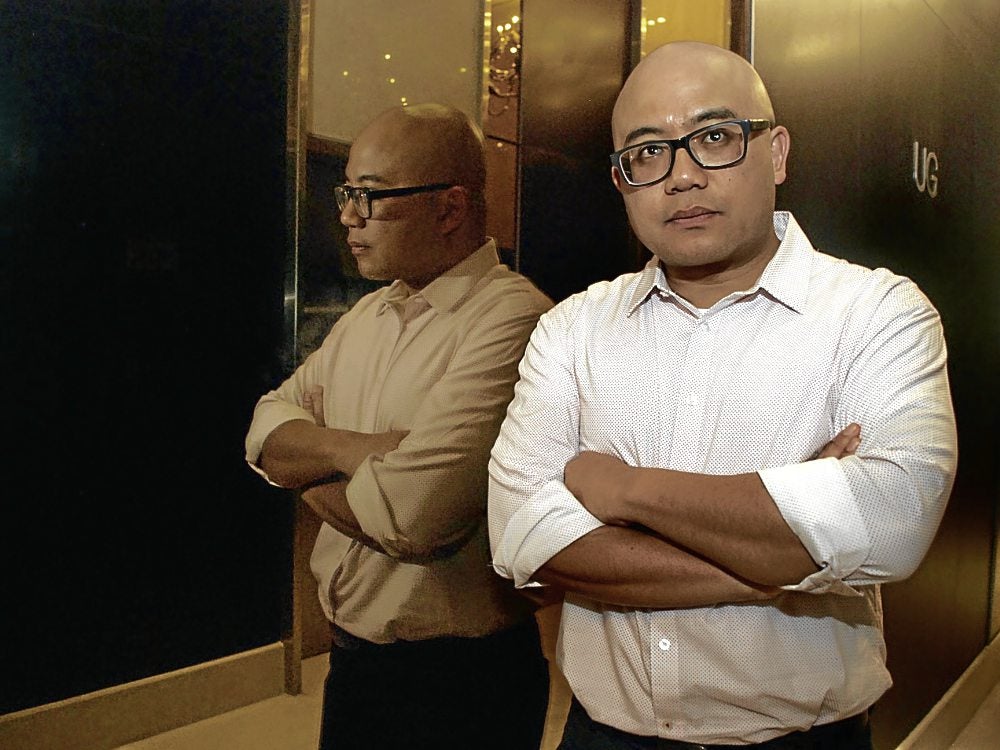 LYSLEY Tenorio’s stories juxtaposes the experience of Filipinos amid both the exalted and enervating elements of American life. ARNOLD ALMACEN

Between worlds with Lysley Tenorio

In the wide, wild universe of fiction, the most transcendent creators are able to visit an elusive space that only exists between worlds—the real and the imagined. The places they visit are both familiar and strange, leading readers to feel like they’ve been here before, at the same time exploring uncharted territory.

This is the exact vibe given off by short-story writer Lysley A. Tenorio, whose figure emits both the ordinary and the eclectic, with his shaven head, glasses and knowing eyes soft against the sharp, striking corners of the Best Western F1 Hotel in Taguig City.

He speaks clearly, with a slight California accent, and is genuinely abashed to be here: “It feels really special and it makes me a little nervous. It’s not so much that I’m writing Filipino characters, but that I am writing about characters who are culturally and, in terms of their nationality, are Filipino. I’m an American writer. I think I worry that maybe the world that I’m building might not ring true to a Filipino reader. If it rings true to a couple of Filipino readers, then I’ll be happy.”

The 40-year-old Tenorio was flown in by National Book Store to promote his rapturously reviewed 2012 debut short-story collection from New York-based Ecco Press, “Monstress: Stories.” This electric gathering of eight stories was recognized by the Inquirer as one of the Top 10 books of 2012.

Slate Magazine included “Monstress: Stories” on its list of the overlooked books of the year, calling it “a jittery, caffeinated, dazzling collection with a poignant center.

Like Tenorio himself, his stories link the Filipino with the foreign, juxtaposing the experience of Filipinos amid both the exalted and enervating elements of American life.

It’s the stories with scenes in the Philippines that really display Tenorio’s gift for telling tales. The roughhousing “Help” takes another look at the Beatles’ eventful visit to the Philippines in 1966.

The best story, “Monstress,” mixes the movies with madness as a cheap monster-movie maker from Manila named Checkers Rosario and his muse, Reva Gogo, are plucked from obscurity by an American producer seeking to use Rosario’s footage for his own purposes, to unexpected results.

Tenorio’s first name is Filipino in its quaintness and came from his siblings. (It’s pronounced “Lesley”). Born in Olongapo City, on April 26, 1972, Tenorio says an earthquake struck as he was being born. “They were going to name me lindol [the Filipino word for ‘earthquake’]. I would have preferred that, but they went with Lysley and spelled it in a strange way.”

He is the youngest of five siblings to United States Navy man Pioquinto Tenorio and homemaker Estrella Agojo. He was only seven months old when his family emigrated to the California town of Lemoore (yes, the same one in his story).

Lysley would spend the rest of his childhood in Mira Mesa, San Diego (“It’s nicknamed Manila Mesa, because there are a lot of Filipinos there”), before leaving for the University of California at Berkeley. He would later earn his MFA from the University of Oregon.

As a boy, he watched a lot of TV and wondered why, on shows like “Dynasty,” there were no Filipino characters. “I used to imagine in my head to get a Filipino kid into this intricate storyline. It always seemed so impossible.”

He also read a lot of comic books, preferring the bright creations of DC Comics, something that would inform his story “Superassassin.”

Tenorio started writing seriously rather late, at 21, in his senior year at Berkeley. He was planning to take a writing class, but that required he apply for it, so he wrote for it. “I realized it was the only class I cared about.”

That’s when he began crafting what would eventually become “Monstress: Stories,” along with his unique sense of the weird amid the mundane. It has received everything from the Pushcart Prize to a National Endowment for the Arts fellowship.

He is often compared to Manila-born “Dogeaters” author Jessica Hagedorn, whom he admires and has worked with, saying it’s “almost silly to be compared to her” and “unexpected and a total privilege.”

Tenorio cops to being able to write only one story at a time. The stories in “Monstress: Stories” each took an average of two or three years to be finished over a 10-year period. He started with a rough outline for plot and then tinkered endlessly with the language and the character.

“I wish I could work faster,” he admits.

“My work is not autobiographical at all. My life is pretty boring,” he says. But like the characters in his stories, Tenorio is being pulled apart by forces from different sides of his existence, by his history and his future, but gently and smoothly instead of violently and unevenly. That’s why his stories are perfectly balanced between backgrounds, pitch-perfect in elegant execution.

“These characters are sacrificing a lot for better and for worse. And when you make the kind of sacrifices these characters are making, it’s not all victory, it’s not all loss. For everything that you gain, you have to lose something. I do think my endings are darker rather than lighter, but I think that makes for more compelling stories,” he says.

They are often built around what seems to be an ephemeral bit of real happenings, like the Beatles’ ill-fated Manila sojourn in “Help,” or the actual closing of the International Hotel in “Save the I-Hotel.”

For the brilliant “Monstress,” Tenorio was inspired by a movie some critics call the worst movie ever made, a 1970 horror film by Z-list director Al Adamson called “Horror of the Blood Monster,” which haphazardly edited together seemingly incoherent bits from several films, including a 1965 Filipino caveman movie called “Tagani.” (Look it up; it is as random as it sounds). Tenorio thought about who would do such a thing, and it was something right in his (dis)comfort zone.

His work has been called Filipino-American, but he writes from a more primal place: “These stories are about strong-willed characters trying to make their way in the world. Obviously, it’s not an accident or a coincidence that all these characters are Filipino and that a lot of them are in America or thinking about America. I think these characters, these cultures of the Philippines and America, are coming together. Sometimes their meeting is harmonious. Sometimes it’s chaotic and disastrous, I’m interested in characters caught in that. I don’t think that is an inherently Filipino experience, or an inherently American experience. It doesn’t feel like a Filipino-American experience either. I think it’s all those things together.”

He teaches Creative Writing full-time at Saint Mary’s College of California. He doesn’t get to write much until the summer and winter breaks.

He visits his mother in San Diego every six weeks. He lives with his partner in San Francisco, and when he’s not reading, writing or teaching, he likes hanging out with his friends and eating out.

“I eat a lot of kale,” Tenorio says, adding he enjoys Filipino food, which he surprisingly doesn’t get to eat often.

To soothe himself, he orders a very dry and cold gin martini or Dewar’s on the rocks.

He likes traveling when it’s not writing-related, savoring Amsterdam and Montreal.

“I felt like I could just be dropped off there and be left to my own devices. I don’t mind a little bit of complication, or maybe even a bit of struggle when you’re dropped in a new place. I like that. I think it’s good to be a little confused.”

The first-time author is very excited by the book tour (“Here I am in Manila! Who knew?”), but admits that, after over 60 stops big and small, he needs to get back to his writing. He is working on a novel, hopefully out in a few years.

Tenorio is tight-lipped about the new book, but says: “In the way that I think [“Monstress: Stories”] is strange, I think that this book will incorporate and draw upon the strange again.”

This is just Tenorio’s third trip to the Philippines. In 1979, he stayed in his mother’s hometown of San Nicolas, Batangas, to be baptized. He returned in 2000 and, passing through the Ninoy Aquino International Airport on his way home, espied a sign reading “No well-wishers beyond this point,” a sight that triggered his story “Help.”

He looked forward to meeting Filipino readers and writers at his signing, which, fortuitously, his mother attended, here on a well-timed trip of her own.

It is strange and welcome seeing Tenorio actually here. He has emerged from one world to another, from home to here, from fictional to the real. He thought a lot about the Philippines in his head and wrote about it. Now he’s actually here. It still amazes him.

“The coexistence of the incredibly modern and Western, and what seems more native and more traditionally Filipino in my head, is so alive here,” he says.

Later, while posing for a photograph, there is a moment when Lysley Tenorio pauses and smiles. Behind him, fuzzy Manila snaps suddenly back into focus, like a place that’s just been sighted for the first time.