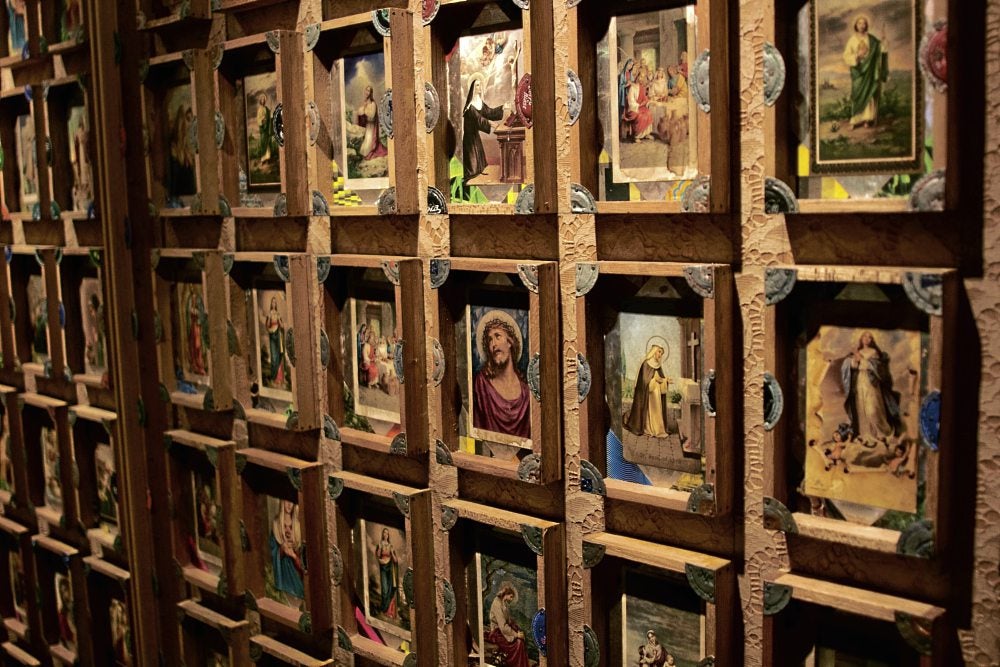 A closer look at Norberto Roldan’s object assemblage “What Is the Color of Faith(?)”

With the just-concluded Art Fair Philippines (AFP) 2013, its creators (the same people behind the annual Art in the Park) moved to another kind of alternative art space; a “light-up” car park in the middle of Makati.

Twenty-four galleries and art groups brought out “the best of Philippine contemporary art” and placed them on the revamped sixth parking level of The Link, Makati, Jan. 7-10.

The unexpected choice of art space was made to enhance the presence of Philippine contemporary art on the international radar, especially since art fairs abroad make use of unconventional locations and imaginative exhibition concepts.

“Our ultimate goal is to offer a rich visual experience to anyone wanting to find out what Philippine contemporary art is all about,” said Trickie Lopa, Lisa Periquet and Dindin Araneta, organizers, in the AFP catalogue.

While AFP did not impose a theme on its handpicked exhibitors, organizers urged them to come up with curatorial plans for display ideas.

The displays were overwhelming and all artworks interesting. Personally, I’d indulge in a second visit so I could completely take in what the fair has to offer,” said sculptor Ramon Orlina, who added he was tickled pink upon seeing artist Justin “Tiny” Nuyda’s painting-homage to him.

The three-dimensional “Asphalt” was a mixed-media compilation of Barredo’s creations, inviting viewers to be “swallowed by darkness.”

Sotheby’s auction record-breaker Ronald Ventura did a fresh take on the Ifugao granary deity, the bulul. The reinterpretation was his “homage to our indigenous culture,” Ventura said.

The art fair partnered with the “Make It Happen, Make It Makati” campaign, which allowed public showcases of various artists’ works in and out of the venue.

“We’re very proud to participate in the art fair, not only because it has been so vibrantly and thoughtfully organized, but also because it is consistent with our mission to help make art more accessible and, even more important, relevant to the public,” said Gigo Alampay of Canvas gallery. “That’s also why we chose to mount an exhibition centered around a theme that, we believe, a wide spectrum of Philippine society can identify with.”