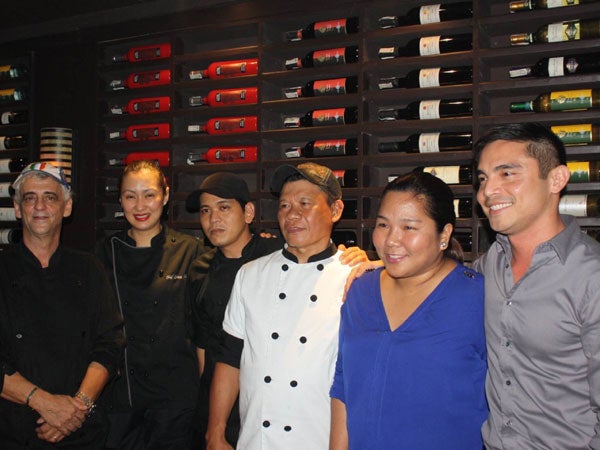 MANILA, Philippines—Italian mobster Carlo Gambino has quite a reputation, having led one of the infamous crime families in his homeland and New York.

But his name takes on a different meaning in Bonifacio Global City, particularly in Burgos Circle, as actor turned restaurateur Marvin Agustin and Red Crab Group president Raymund Magdaluyo attempt to give the name Gambino a different aura.

“We felt that Gambino was a catchy name, (giving the restaurant a feel of) the gangsters of New York,” said Agustin during the official launch of the restaurant.

Carlo Gambino was one of the most powerful bosses in New York, having operated one of the five original families in the Italian American Mafia.

And 70-seater Gambino looks just like a restaurant from a mobster movie, only a bit more relaxing since you know that mobsters are not actually lurking about waiting to pounce on

The restaurant offers Classic Italian cooking with a modern twist, said Agustin, telling reporters that they wanted something that screamed Italian but was still “young, not typical” after their success with Italian-American restaurant chain Marciano’s.

Sanchez said Bucciarelli came from Milan, and along with Agustin, was the main driving force of Gambino.

He selects the ingredients which go into the dishes they whip up in Gambino, sourced from establishments importing authentic Italian ingredients.

Sanchez said they drew mostly foreign customers back in their soft opening stage but added they were hopeful that locals would also drop by to try some of their dishes.

“Our ravioli is very good and pizza dough is freshly made every day,” Agustin said, adding that while he dabbles in the kitchen now and then, he focuses on how to “marry business with (Bucciarelli’s) art.”

“When I eat, I think like the customer. Whenever I eat, I would think about whether the guest will like it,” he said, recalling how his discussions with Bucciarelli and the rest of the team while choosing the dishes for Gambino’s menu.

It was Magdaluyo who told Agustin about the Italian chef who eventually made their dreams of a restaurant serving up authentic Italian food a reality.

With Bucciarelli at the helm, Gambino came out with a menu offering original homemade Salsicce or Italian sausage, Carbonara Classica with gunciale, Risotto Tartufo, Chicken Cacciatore, and Beef Carpaccio.

Agustin said they were also preparing to include in their menu aged rib-eye steaks as well as braised pork.

Gambino is the newest in Agustin’s many ventures in the restaurant scene, and he said that although it was “a tough business” all the challenges were worth it “if your heart is in it.”

“I was a waiter when I was 16 and I have learned how to love the service (that comes with the business). I enjoy it, it really starts with your passion, your dream,” he said.

“If you like it, don’t let anyone stop you,” said Agustin. (advt)