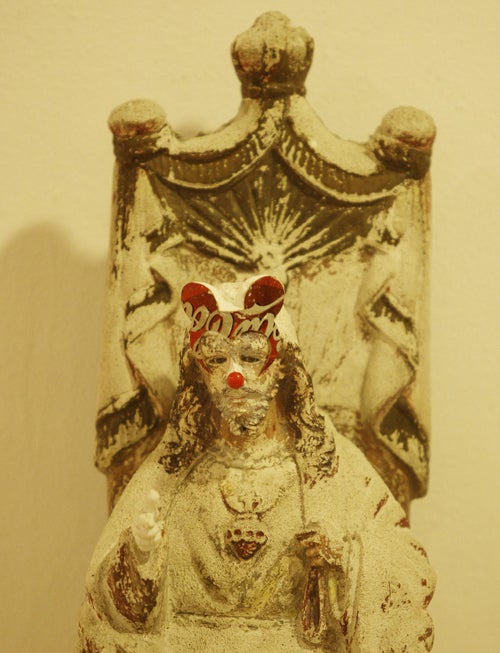 IT’S THE PRESIDENT’S CALL. An art sculpture by Filipino contemporary artist Mideo Cruz showing his version of Jesus Christ is displayed during an exhibit at Manila's Cultural Center of the Philippines, Monday, Aug. 8, 2011. The exhibit has provoked heated debate about freedom of expression in the predominantly Catholic nation. (AP Photo/Aaron Favila)

The Cultural Center of the Philippines (CCP) on Tuesday closed down the exhibit featuring the controversial image of Jesus Christ with a wooden penis, apparently after President Benigno Aquino III intervened amid threats, vandalism and claims of blasphemy.

In a statement on Tuesday, the CCP did not mention the President, saying only that threats to its board of directors had increased as media attention to the exhibit sparked religious outrage, prompting them to close the show.

But in an interview with reporters in Batangas City on Tuesday, Mr. Aquino said that he had called the CCP the day before and conveyed his disapproval of the controversial art work.

The work of Mideo Cruz, a mixed-media collage called “Poleteismo,” provoked a raft of condemnation for being “sacrilegious and blasphemous”.

It was part of the “Kulo” exhibit featuring former art students from the University of Sto. Tomas (UST) and was meant to be the CCP’s celebration of the 150th birth anniversary of national hero Jose Rizal.

According to Mr. Aquino, 85 percent of Filipinos are Christian and the CCP was funded by the taxpayers and thus “should be in the service of the people.”

“When you insult the beliefs of most of the people, I don’t see where that is of service,” he said.

“There is no freedom that is absolute. I’m not after censorship. Art is supposed to be ennobling. When you stoke conflict that is not an ennobling activity,” he said.

In its statement, the CCP said the board of directors made the decision to close down the Main Gallery where the exhibit was displayed “due to numerous emails, text messages and other letters sent to various officers of the CCP, and to the artists themselves, with an increasing number of threats to persons and property”.

It said the threats became alarming on Aug. 4 when a couple vandalized the controversial work and attempted to set fire to the exhibit though they were unsuccessful.

Subsequent hate mail and threats to members of the board intensified following this incident, the CCP said.

The CCP management said it has reviewed its policies and was now taking steps to enable to enable its officers and staff to make more informed decisions in the future.

It stressed, however, that it will continue to act as catalyst for free expression of Filipino artists.

Despite the announcement of the closure, Catholic and Baptist groups are bent on going through with plans to file criminal and administrative complaints against CCP officials and artist Mideo Cruz.

Lawyer Jo Imbong said a case would be filed this week against CCP chair Emily Abrera, CCP board members, and Cruz for violating Article 201 of the Revised Penal Code, which deals with “immoral doctrine, obscene publications and exhibitions, and indecent shows.”

“The law has already been violated after they allowed the exhibit to proceed. Even after it was closed, they should still be held accountable for it,” said Imbong.

She said the charges would be filed before the Office of the Ombudsman within the week.

However, CCP board member Artemio Lizaso would not be included in the charges as he was against the exhibit, Imbong said.

On Tuesday, the UST joined in the condemnation of the exhibit and supported the filing of charges against CCP officials and Cruz.

UST vice rector Fr. Pablo Tiong said in an interview on the Church-run Radio Veritas that the “Kulo” art exhibit was not a project of the university and that UST was neither endorsing nor supporting it”.

Tiong said Cruz was an “undergraduate” at the university but would not sanction him in the meantime. With reports from Philip Tubeza and Christian Esguerra