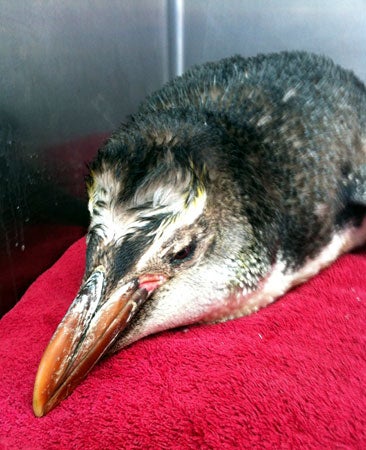 In this Wednesday, Feb. 20, 2013 photo provided by the Wellington Zoo a royal penguin rests in an enclosure at the Welling Zoo in Wellington, New Zealand. Thirsty and thin, the penguin was been found stranded on a New Zealand beach more than 1,000 miles from its sub-Antarctic home. (AP Photo/Wellington Zoo)

WELLINGTON, New Zealand— Thirsty and thin, a royal penguin has been found stranded on a New Zealand beach more than 1,000 miles from its sub-Antarctic home.

The penguin was found by hikers Sunday and is now being cared for at the Wellington Zoo. Staff members say it remains in a critical condition, emaciated and suffering from kidney failure. But it has made small improvements each day.

The penguin’s arrival has revived memories of another penguin, an emperor nicknamed Happy Feet, that arrived in 2011 and whose recovery at the zoo captured the hearts of many before he was released.

Royal penguins have a yellow crest, eat krill and squid and generally live on and around Macquarie Island, about halfway between New Zealand and Antarctica. Just four have been recorded landing on the North Island over the past 100 years.

Jenny Boyne, who lives near Tora Beach where the penguin was found, said she drove it to the zoo in a fish crate after staff suggested she bring it in.

“It sat down like a little quiet lamb,” she said.

The bird stood up briefly a couple of times and honked but generally lay still for the two-hour journey, she said. She blasted the air conditioning and spritzed the bird with water after zoo staff instructed her to keep it cool. She said she was surprised it had no significant smell.

Lisa Argilla, the veterinary science manager at the zoo, said the penguin weighed about 2.7 kilograms (6 pounds) when it arrived. She said it has put on a small amount of weight since then but remains severely underweight. She said it was dehydrated, and staff members at the animal hospital have been keeping it on an intravenous drip. She said the penguin had tried to nip her a few times but didn’t have much strength. She added she’d feel more confident about its prognosis if and when it regained the strength to stand properly.

The penguin is about 1 year old, 50 centimeters (20 inches) long and its sex hasn’t been determined, Argilla said.

Royal penguins can grow to about 75 cm (30 inches) and 5.5 kilograms (12 pounds). They are considered a threatened species but not endangered. They shed all their feathers during an annual molt, which the New Zealand penguin is doing now.

“These penguins tend to stay out at sea,” she said. “This guy’s probably been following food, and he might have caught a current. There’s obviously not enough food out there — either he didn’t know where to look, or the warm weather might be causing a shift in the food supply.”

Boyne said she’d named the penguin Tora after where it was found. Others have nicknamed it Happy Feet Jr.