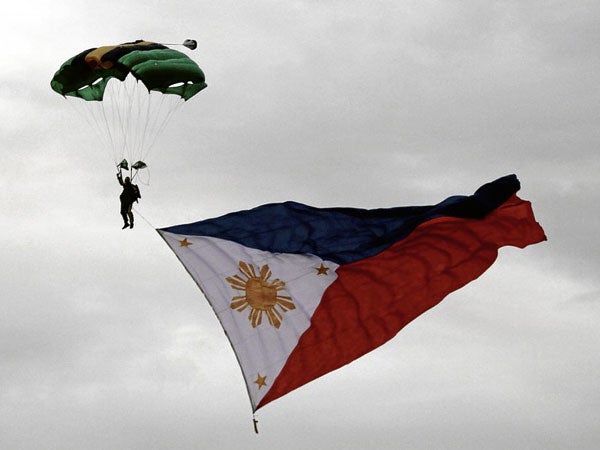 RED, WHITE AND BLUE The Philippine flag is unfurled by an unidentified parachutist to mark the opening of the four-day 18th Philippine International Hot Air Balloon Fiesta on Thursday, Feb. 21, 2013, over the former US Clark Air Base in Pampanga province. It might as well also mark the start of the four-day observance of the 27th People Power Revolt on Edsa. RICHARD A. REYES

CLARK FREEPORT—For many adults February is the season of the heart, but for 9-year-old Trisha Anne Carlos it is the time to once again see the colorful hot air balloons fill the early morning sky here.

“We woke up early to see the balloons. They are really beautiful,” said Carlos, a third grader in nearby Mabalacat City.

The inflated propane-powered airships in various shapes attracted hundreds of people to this economic zone on Thursday as the giant balloons quietly glided with the wind.

The balloons took off early morning from this former US military base to open the 2013 Philippine International Hot Air Balloon Fiesta, a four-day event that has become an annual spectacle for thousands of local and foreign tourists since 1994. Last year, some 92,000 went to the festival, organizers said.

Originally intended to uplift the weary spirits of residents around Clark Field, who were affected by the 1991 eruptions of Mount Pinatubo and subsequent lahar flows, the hot air balloon fest was initiated in 1994 by then Tourism Secretary Mina Gabor.

This year’s staging at Omni Aviation Complex, 32 hot air balloons from 15 countries are joining, said Roa, event organizer of the Philippine International Hot Air Balloon Fiesta (PIHABF). At 7:10 a.m. on Thursday, however, only 26 were able to take off because of strong winds.

Swedish balloonist Charlotte Algotsson, who piloted the Inquirer-sponsored balloon, said the wind should not exceed 8 knots to fly safely.

“If the wind is too strong, we can’t fly. It depends on the wind. We don’t like more than 8 knots. Last year, the weather was good for three days and there was rain only on one day,” Algotsson said.

She said she had been joining the festival for four years.

Miroslaw Konefal, 37, a balloon pilot from Poland who won three competitions here last year, chose not to take off.

“It’s too windy. I think it will be too dangerous for landing. Taking off is not a problem but landing is dangerous. Last year [the weather] was much better,” he told the Inquirer.

The newest attraction is the aerial exhibition of the France-based Breitling Jet Team, a civilian aerobatic group that uses an Aero L-39 Albatros aircraft. Some balloons are shaped like the fairy tale character Humpty Dumpty, a truck and a tulip bouquet.

From 1994 to 1998, the display and flight of the propane-powered airships were successfully held here. The 1999 event, however, was canceled due to several problems, like insufficient operational funds and interruption of flights at nearby Clark International Airport.

The festival was resumed in 2000 and every year, until now, other aero activities are being highlighted, including kite flying, glider flight, radio-controlled “UFO” light flying and model aircraft demonstrations, ultralight plane flights, skydiving, paragliding and aerobatic exhibitions.

Hot air balloon flights are held early in the morning and late in the afternoon when the wind is most calm, event organizers said.

Unlike airplanes and helicopters, hot air balloons are practically not navigable. Balloonists rely on the atmosphere to navigate and constantly change altitude by increasing the propane or allowing the balloons to gradually deflate to find the wind direction they want.

They do not race against time, as their airships travel at similar speed. The competition is about who arrives closest to the predetermined target by dropping a marker on a designated landing point after constantly changing altitude to turn left or right or zigzag in the air to reach the target.

“I won first place for three days last year but on the fourth day we were fourth place. You see this [marker], you have to drop this on the landing [site], which is the target. Whoever drops it closest to the target wins,” Konefal said.