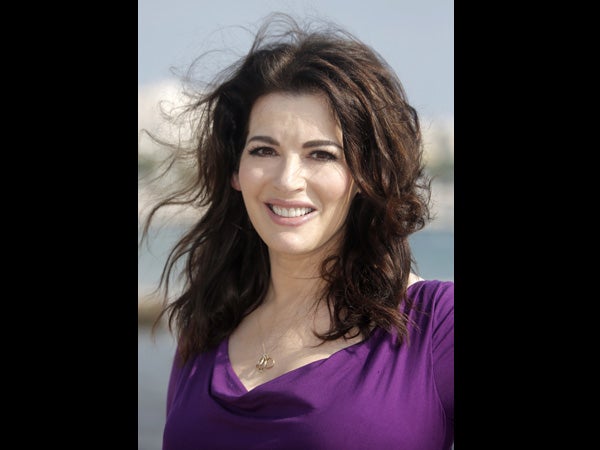 MIAMI BEACH, Florida— America might not know what to make of a celebrity chef as comfortable quoting philosophers as corralling reality cooking show contestants.

And Britain’s Nigella Lawson is completely at ease with that.

“Today, it’s all about marketing and people want to know where to place you,” Lawson said during an interview Saturday at the South Beach Wine and Food Festival. “And I suppose I just don’t care about that.”

Lawson has carved a long culinary career by rejecting stereotypes and speaking her mind.

Most recently, she garnered attention for telling the producers of her latest television venture “The Taste” that they could not retouch images of her to reduce her belly.

It’s not about vanity. It’s about voice. And she wants hers heard — or in the case of her curves, seen — without layers of producers and editors and retouchers reinterpreting her message to viewers and readers.

“I don’t need that to be mediated by any other person,” she said. “To have your voice tampered with is a terrible thing. It has to be a genuine conversation with the reader.”

That’s why when Lawson writes cookbooks — including her just released ode to Italian cooking, “Nigellissima” — she sends them to the designer long before they go to her publisher. It’s a way to preserve her vision for the book rather than have an editor decide how it should look.

It’s also why she’s comfortable dropping the names of British philosophers — in this case Bertrand Russell — in the introduction of her new book, the sort of highfalutin chatter that would end up chopped by most cookbook editors.

As for “The Taste” — which Lawson shoots with fellow culinary free spirit Anthony Bourdain — she has ideas for changing it up a bit if there is a second season, including more cooking and eating by the teams who compete on the show.

“The producers probably don’t want all my extra ideas, but I probably will give them the benefit of my ideas whether they want them or not,” she said.