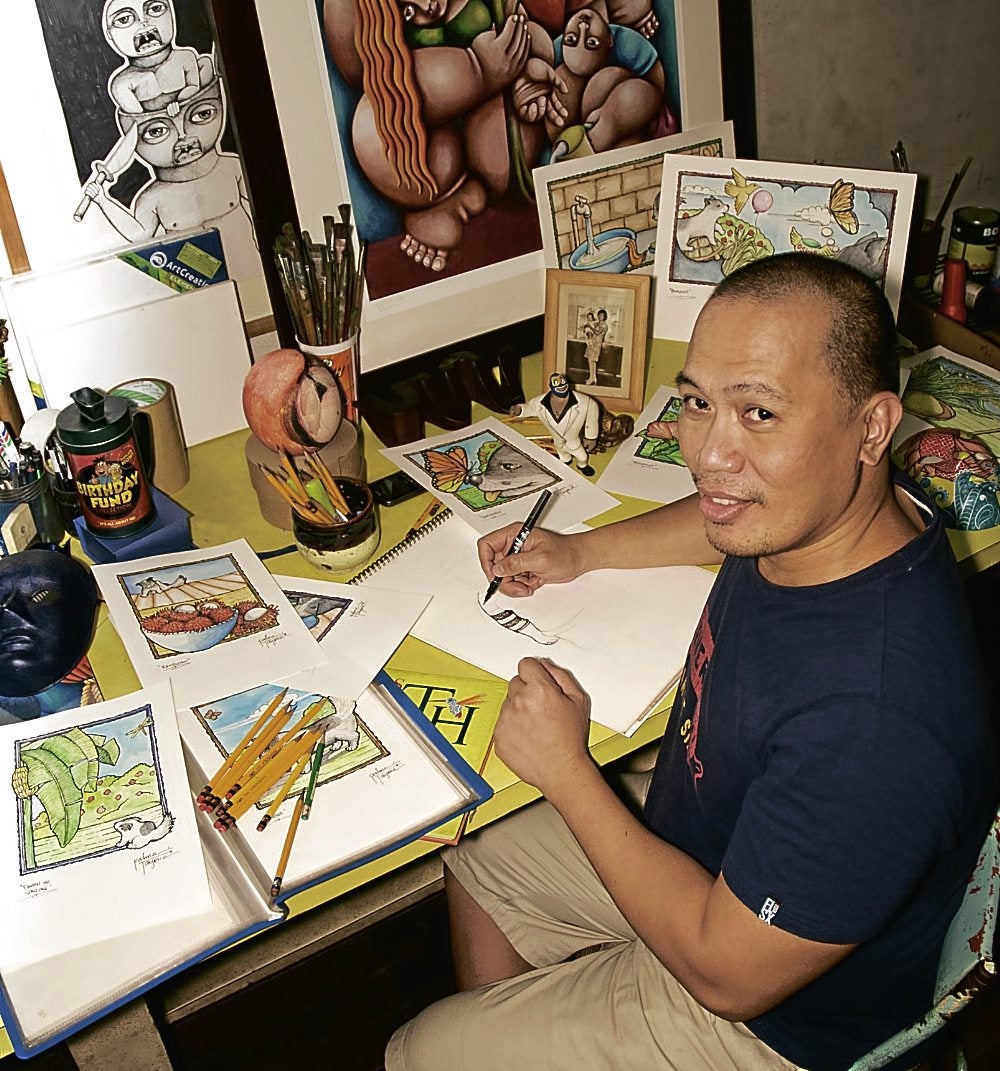 DANIEL Palma Tayona at work. His original illustrations are mounted in an exhibit at Canvas gallery in QC.

What has “paw prints” from cover to cover courtesy of a lively mutt named Oskar, is prone to “dog-ears” brought about by small hands, and will keep you guessing all day long?

This time, the lighthearted illustrations of Tayona bring 57 riddles to life. Tayona’s figures are barely seen in the book as focus is on a furry friend close to the author’s heart—Oskar, a Japanese spitz-terrier mixed-breed.

Oscar serves as readers’ guide throughout. While the playful pup runs around his master’s house and the outdoors, he comes across objects, animals and hullabaloo of things, which become the riddles’ visual clues.

“He was the inspiration for this book, and I imagined him in its pages as a free-spirited animal who likes to chase butterflies in a flower garden, doing what any happy, healthy dog would be doing in a day,” Tayona said.

Tayona’s illustrations demonstrate the same treatment he applies to various layout designs he has done for other children’s books and his own artworks. The painter-graphic designer has a fondness for “cutting” portions of design elements at very interesting angles, creating a medley of points-of-view without sacrificing visual impact or the gist of the work featured.

While the riddles are in Filipino, Tayona chose to include Filipino-to-English answer pages that even include the definitions of some of the specialized words children might be unfamiliar with.

Amid the cyber age and the coming and passing of fads, it is through “Bugtong, Bugtong” 2 that Tayona answers Villanueva with a resounding yes and reintroduces the Philippine riddle form to youngsters who might have deemed it outmoded. 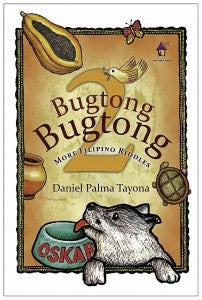 But Tayona will not stop there.

“My next dream project as an illustrator and storyteller is to come up with a series of books about how to be lost in a wonderful, crazy city like Manila; to know the myriad of secrets behind its walls, beneath its crevices and its past; to have the adventure of a wide-eyed boy seeing everything for the first time; and to come out of it as a brave soul, thankful and much clever than he was before… I love being an artist because I can ‘talk’ more with my drawings more than I can with words,” Tayona said.