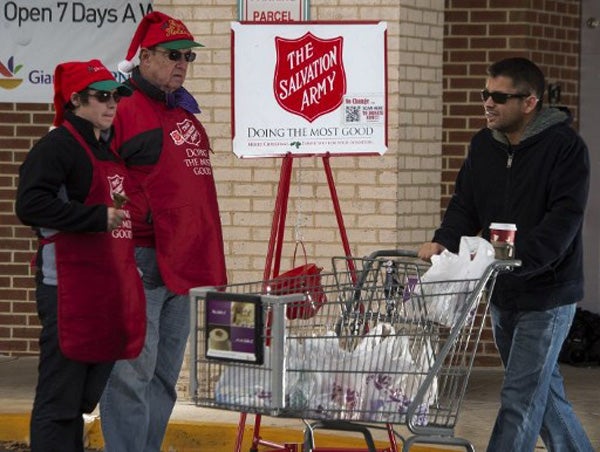 Salvation Army bell ringer volunteers ring their bells hoping for a donation into a kettle outside a Giant grocery store November 24, 2012, in Clifton, Virginia Volunteer work has long been touted as good for the soul, but the practice is also good for your heart, according to a study out Monday, Feb. 25, 2013, in the journal JAMA Pediatrics. AFP/PAUL J. RICHARDS

Volunteering good for the heart—study

OTTAWA—Volunteer work has long been touted as good for the soul, but the practice is also good for your heart, according to a study out Monday in the journal JAMA Pediatrics.

Researchers at the University of British Columbia in Vancouver wanted to find out how volunteering might impact one’s physical condition, and discovered that it improves cardiovascular health, said study author Hannah Schreier.

And “the volunteers who reported the greatest increases in empathy, altruistic behavior and mental health were the ones who also saw the greatest improvements in their cardiovascular health,” said Schreier.

Previous studies had shown that psychosocial factors, such as stress, depression and well-being, play a role in cardiovascular disease, which is a leading cause of death in North America.

Schreier noted that the first signs of the disease can begin to appear during adolescence, which is why she recruited young volunteers for her study.

She and her team measured the body mass index, inflammation and cholesterol levels of 53 Vancouver high school students who spent an hour a week working with elementary school children in after-school programs in their neighborhood.

They compared the results with a group of 53 students who were waitlisted for the volunteering program.

After 10 weeks the volunteers had lower levels of inflammation and cholesterol and less body fat than those on the waitlist.