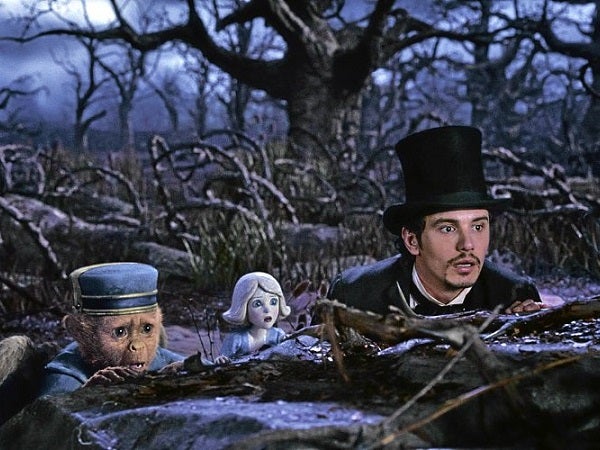 SCENE from “Oz The Great and Powerful”

There are certain movies that simply demand to be experienced in 3-D. Do yourself an Emerald City-sized favor and catch Disney’s “Oz The Great and Powerful” in 3-D.

Sam Raimi, the brains behind the original Spider-Man trilogy, has obviously crafted the film to showcase what he could do with 3-D. As a result, things keep flying at the audience, the camera zooms and dips, and characters keep falling from dizzying heights. It’s an exuberantly visual party that Raimi uses to celebrate the spirit and form of the old carnival-style sideshows.

That homage is very much a part of “Oz,” an unabashedly obsessive prequel to the 1939 Judy Garland film, “The Wizard of Oz,” which, in turn, was an adaptation of L. Frank Baum’s 1900 classic kids’ novel “The Wonderful Wizard of Oz.”

While many modern moviegoers may not have actually seen the Garland film, they do get the general idea—Dorothy, ruby slippers, Wicked Witches, Kansas—and that works well enough when they go to see this. In 3-D, hopefully.

“Oz” is Raimi’s attempt at explaining the origin of the titular Wizard, who was actually a rather elusive character in the original novels. The writers of “Oz” have fleshed out that back story, while using bits and pieces of the other Oz stories, to brew a film that leads directly into “The Wizard of Oz.”

Oscar Zoroaster Phadrig Isaac Norman Henkel Emmannuel Ambroise Diggs—Oz for short (James Franco, whom Raimi worked with in 2002’s “Spider-Man”)—is a talented, smooth-talking, small-town illusionist who loves the ladies but is down on his luck. But when a twister deposits him into the magical realm coincidentally named Oz, he sees the opportunity to become someone else. He discovers that Oz’s denizens believe him to be the wizard prophesied to save the land from the Wicked Witch and, blinded by the considerable treasury of Oz, passes himself off as the real thing using sleight-of-hand and cheap tricks.

But after encountering the three witches (the enchanting trio of Mila Kunis as Theodora, Rachel Weisz as Evanora and Michelle Williams as Glinda) he finds out that he may have a part to play in the salvation of Oz, after all.

Slavishly and lavishly designed as an ode to the original “Wizard of Oz” film, “Oz” has similar elements, such as a black-and-white Kansas prologue that blinks into a brilliantly colorful Oz. Raimi essentially took a children’s book and threw every kind of bleeding-edge technology at it. The story itself is straightforward, save for a couple of admittedly cool twists. But it’s Raimi’s constant barrage of fantastical visual surprises that keeps “Oz” buoyant. To get the full effect, watch “The Wizard of Oz” immediately after seeing this. The connections are uncanny.

The only discordant element is the casting of quirky James Franco as Oz. Charismatic in some parts of the film but wooden in others, Franco’s performance pales in comparison to the earnest efforts of his cast mates. In particular, Kunis chews scenery so spectacularly as the conflicted Theodora that she becomes a guilty pleasure, overshadowing the restrained work of Weisz as Evanora and the twinkling subtlety of Williams as Glinda.

“Oz’s” most memorable role, however, goes unexpectedly to China Girl, a combined feat of CGI rendering and fantastic voice acting by child actress Joey King (Ramona from “Ramona and Beezus”) that will leave you in awe, wondering how they made the literal porcelain person come to life and how King made her seem so real.

Similarly, Zach Braff (J.D. from TV’s “Scrubs”) makes much more of an impression as the voice of the winged monkey Finley than he does as Oz’s original assistant Frank.

While “Oz The Great and Powerful” is a tale of a man seeking redemption through ingenuity as well as a trip to a magical place, Sam Raimi’s latest film recalls the feel of Martin Scorsese’s “Hugo” and Tim Burton’s “Charlie and the Chocolate Factory” in its seamless meshing of old-fashioned storytelling and modern movie magic to produce a spiritual descendant of those carnival sideshows. It’s a film that takes you somewhere over the rainbow for the first time.

Disney’s “Oz The Great and Powerful” opens in Metro Manila theaters on March 7.