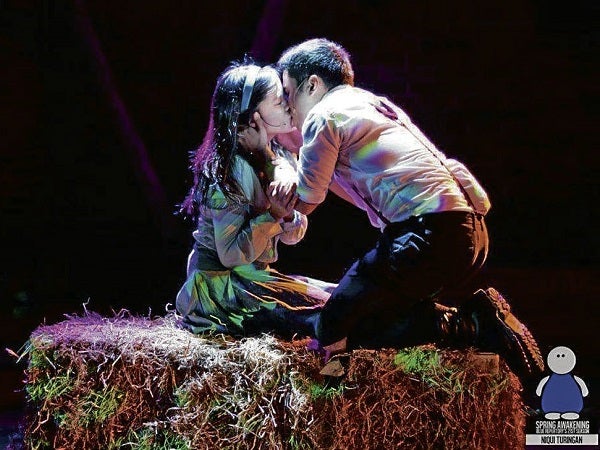 In terms of material, “Spring Awakening” and “They’re Playing Our Song” are polar opposites. The former is a modernist rock musical populated by 19th-century German adolescents on the brink of sexual awakening, while the latter is old-fashioned, feel-good fare about a neurotic musician couple.

Yet, at the very core, both are quite the same attempt to dissect the complicated matter of love. Both shows call for intimacy in the production. And, bonus to the local playgoer, both marked their return to the Manila stage in February (coincidentally, or not, opening around Valentine’s week).

Between the two, “Spring Awakening”—the season closer of student-run Blue Repertory of the Ateneo de Manila University—certainly had more reason to be an intimate February experience. To begin with, this Best Musical Tony winner (music by Duncan Sheik, book and lyrics by Steven Sater) was already stripped to the bare essentials by its venue, the university’s Rizal Theater, which resembles an underground studio. Trency Caga-anan’s minimalist set design and Meliton Roxas Jr.’s evocative lighting furthered the small-scale, intrusive atmosphere.

Right to the very last row (and it’s not that far), the show was an open invitation to peer into the troubled lives that walk the close-minded world that playwright Frank Wedekind created to much controversy, a world centered on the intelligent, rebellious Melchior; sexually ignorant Wendla; and sexually tortured Moritz. With the audience so close to the action, this “Spring Awakening” set out to be a see-all, hear-all experience.

What this look-through-the-spyglass experience did achieve, however, was magnify the problems that hounded this production. For instance, the venue that made it intimate also wrecked the sound mixing to some degree, turning the theater into an occasional battlefield between the performers’ low notes and the band (enchantingly creative musical direction by Ejay Yatco, nonetheless).

Issues of incomprehensibility also extended to no less than the leads themselves. Gabriel Medina sure had the pubertal heft and edgy voice to play Melchior, while Bernice Reyes was innocence incarnate as Wendla. Yet, both performers were plagued foremost by diction problems, second by an overall tentativeness in their attack on the characters. That left the impression of performances wanting more time to bake fully.

The same tentativeness haunted the rest of the cast. Certainly, they delivered those big numbers like “Touch Me” and “Totally F*cked” with authentic rawness. Delphine Buencamino’s explosive choreography also became pounding anthems of angst and frustration through their hands (their bodies, really).

It was when they weren’t clumped together—the solo scenes, duets, nonmusical sequences—that you got this nagging feeling that these performers were simply going through the motions, so to speak. More so for Medina and Reyes, whose pivotal beating and hayloft sex scenes came across as mere efforts to “get them done and over with.”

Unlike the Philippine premiere by Atlantis Productions less than four years ago (with a stellar Joaquin Valdes as Melchior leading a bevy of twenty-somethings), this BlueRep staging had the advantage of a cast that’s just right for the characters’ age requirement.

How unfortunate, then, that this show failed to be as involving as initially promised. The result was less a cohesive story told through music, and more a bunch of musical numbers strung together, sprinkled with line readings and acting choices that curiously sucked out much of the book’s already spare inherent comedy.

When Melchior and Wendla sang “The Word of Your Body,” the excitement of blossoming love could hardly be felt; when Melchior broke down at the graveyard upon realizing Wendla was dead, where was that most tragic teenage heartbreak?

In the end, it all came down to how director Andrei Pamintuan stirred this production. True, for an Ateneo production, this “Spring Awakening” was unabashedly daring in its portrayal of sexuality. But despite the audience proximity—the ensemble performers were seated amongst them—the connection between actor and performer was disappointingly flimsy.

The show’s one thespian salvation came in the form of Maronne Cruz as the free-spirited Ilse. Undeniably this production’s standout performer, she was all soulful, note-perfect singing and nuanced acting that called to mind a similar achievement, albeit in a much larger role, as Ivy in last year’s “Bare.” (She also played Wendla during certain performances, and online word-of-mouth was all praise as well).

Yes, this “Spring Awakening” (which closed Friday night) was thought-provoking; much of that owed to the material. But what started out as a promising introspective dive into a confused hormonal universe turned out to be quite a nonrouser—an uneven, disconnected experience.

On the other hand, rousing is definitely not an appropriate word for 9 Works Theatrical’s “They’re Playing Our Song,” slated to close Sunday.

The musical is, first of all, the stage translation of two of its creators’ real-life relationship. The book is by Neil Simon, an institution in American theater and film; the music and lyrics by Marvin Hamlisch and Carole Bayer Sager, respectively—and the two happened to be ex-lovers sometime during the ’70s.

In the story, Hamlisch becomes Vernon Gersch, an uptight, award-winning composer, while Bayer becomes Sonia Walsk, an up-and-coming lyricist who also happens to be a scatterbrain.

Vernon and Sonia meet, work, fall in love, and find themselves entangled in a messy relationship, with Sonia frustratingly unable to run away from her former boyfriend Leon. Sounds like the perfect formula for a date musical—and through Robbie Guevara’s careful direction, it becomes so, at once intimate and charming.

And also, an affair we wouldn’t want to be involved in. For therein lies the accomplishment of this production: It successfully paints a picture of the kind of gritty, problematic relationship most of the audience only know too well—and one that, in the hands of a less capable pair of actors, would only be reduced to whimsy and vapid cuteness.

That does not happen, of course, and we have Nikki Gil and Lorenz Martinez to thank for it.

Gil last graced a 9 Works production in “Sweet Charity,” where she winningly sang, danced and acted the title role to a Best Actress honorable mention citation from this paper. The year before that, she was also Elle Woods in Atlantis’ “Legally Blonde.” If she’s slowly being typecast as “perky, vibrant but sweet,” consider her Sonia the epitome of third-time’s-the-charm.

Here, Gil gives us a Sonia who’s always on the edge, always a whirlwind of energy, you’d think she’d had one cup too many of morning coffee. It’s the minor details—that unconscious flicking of the hand, the unending shuffling of feet—that really define the performance.

But with every delightful storm of words that comes out of her mouth, we find that this Sonia can also be a lady of thought and feeling—through Gil’s poignant delivery of the classic “I Still Believe in Love,” for example.

The more reserved, and in turn, powerful performance belongs to Lorenz Martinez (whose impressive credits include a stint as the Engineer in “Miss Saigon” in the Netherlands). With Vernon, what he does is draw the audience in, effortlessly capturing our attention with his very natural acting, every word uttered with clarity, every note sang with admirable ease.

The show’s highest point undoubtedly belongs to this veteran stage actor, in an unpretentious rendition of the musical’s oft-heard tune, “Fallin.” In Martinez’s portrait of a high achiever finding his way through the clutter, it’s the quieter moments that matter more.

The rest of the team can’t be more excellent company. The Greek chorus, Sonia and Vernon’s individual inner voices, are a joyful pair of trios (Reb Atadero, Noel Rayos and James Stacey for his; Peachy Atilaño, Anna Santamaria and Jill Peña for hers).

Mio Infante’s scenography is a hodgepodge of witticisms—the turntable, the moving background in the guise of a keyboard, the half-a-car, the intricately designed apartments. Joseph Tolentino’s brassy orchestrations, meanwhile, are a necessary infusion of life to the cliché material.

The one problem this otherwise spotless production encounters is in Chuck Ledesma’s sound design: With the loud instrumentation, it can be quite a chore to hear the performers’ low notes (Gil in “Workin’ It Out,” for instance). But a minor problem, still, when taking the show as a whole.

Last time “They’re Playing Our Song” made the national headlines, it was in 2000, with Lea Salonga and Singaporean actor Adrian Pang playing the leads. (This dynamic duo made a hilarious comeback last year in Atlantis’ “God of Carnage.”)

This time, it’s not as splashy. But the believability is nevertheless there, whole and tangible.