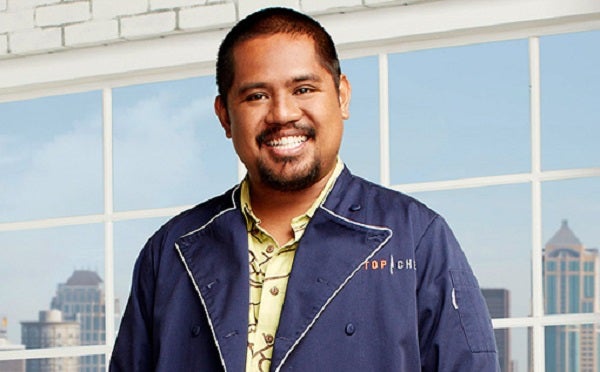 MANILA, Philippines — There have been a number of Filipino chefs who have tried their luck inside the competitive kitchens of Top Chef, but no one else has flaunted his roots more than Sheldon Simeon.

Simeon, the Hawaiian born who was raised in a Filipino household, has a classic underdog story that Filipinos love — a dishwasher turned executive chef and one of the three finalists in Top Chef Season 10: Seattle.

The 30-year-old chef has been known to use ingredients that “speak to me,” as Sheldon repeatedly said throughout the competition.

And on several occasions, they would involve ingredients Filipinos are most familiar with.

In episodes 10 and 11 of the Seattle edition, Simeon ruled the elimination challenges for nailing dishes that Filipinos most probably would serve on their dining table more than once a week.

Making a pitch for the restaurant concept URBANo, Simeon’s upscale Filipino food with a twist wowed the judges, especially with his famous “sinigang.”

“It makes you sit up straight, in a good way,” commented famous New Yorker restaurateur Danny Meyer after taking a sip of the sour taramind soup with pork belly, shrimp and snapper concoction.

Simeon’s hopes of reliving the memories of his grandfather, who moved to Hawaii from Ilocos Sur, through URBANo turned into reality — even for one night — in the anticipated Restaurant Wars.

And he, once again, put Filipino cuisine up on a pedestal, as his team won the challenge with a menu serving Kilawin (usually served with beer in the Philippines), Miki, the famous pork Adobo, Halo-halo, and even Balut (which others think of as exotic) — all done upscale.

Head judge Tom Collichio went as far as saying Simeon’s pork Adobo was the best tasting dish of the night. But it isn’t our typical “toyo’t suka” broth but done with mung bean pureé and pea shoot salad.

“You don’t get too much Filipino restaurant concepts like that. Maybe we are waiting for a chef like you to do that,” Collichio told him.

Chefs like Season 9: Texas winner Paul Qui, Dale Talde (Season 8: All Stars and Season 3: Chicago), Leah Cohen and Eugen Villatora (Season 5: New York), and Josie Smith Malave and Chrissy Camba (Season 10: Seattle) have all been open about their Filipino lineage, but only Simeon has showcased it extensively in the show.

“My grandfather travelled to the Philippines with a dream of giving a better future to his family, here I am three generations later doing the same thing,” said Simeon.

“Filipino culture is very hardworking culture, Filipino foods are very soulful. Food of that style it reminds me of my grandparents,” he also said.

On the 16th episode last week, though, as the two-episode finale of the Bravo TV creation unfolded, Simeon chose to take an unfamiliar route.

Along with other finalists Kristen Kish, who emerged from the Last Chance Kitchen, and Brooke Williamson, Simeon had to serve a three-course meal and run the service for Collichio’s restaurant Craft.

“It’s definitely out of my comfort zone. Not the type I’ve been cooking all season. But I’m doing it to show how much I’ve grown,” said Simeon.

Simeon took risks and tried something new, but in the end, the judges just wanted the old “Sheldon” back.

“Overall this is not Sheldon, this is another chef who put on Sheldon’s hat,” commented Hugh Acheson after tasting Simeon’s quail dish.

Simeon was eliminated and left Kish and Williamson to battle for the title of Top Chef.

“I’m definitely disappointed to come so far and so close, but I fell a little short. I’m gonna continue to cook from my heart,” a teary-eyed Simeon said.

While he ultimately failed to bring home the title, Simeon, though, throug out the competion still managed to make Filipino cuisine a winner.