The one certainty about next pope? He'll wear Gammarelli | Lifestyle.INQ ❮ ❯ 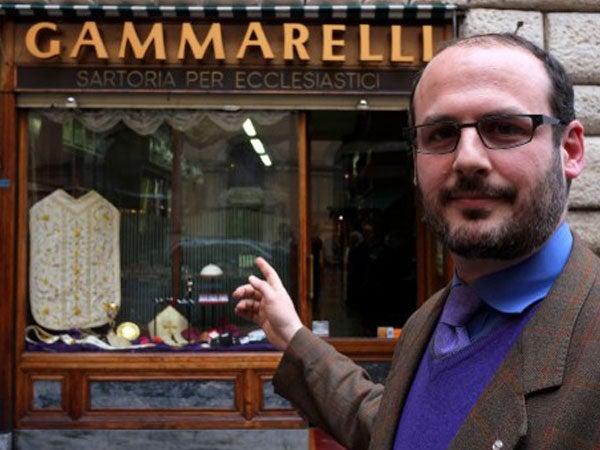 TAILOR FIT TO THE POPE Lorenzo Gammarelli poses in front of Gammarelli ecclesiastical tailoring in Rome on Feb. 21, 2013. The tailors at Gammarelli ecclesiastical tailoring are expected to be already creating sumptuous vestments for the new pope in small, medium and large sizes so that whoever is chosen will fit right into the clothes. Six generations of Gammarelli's have had the honor of serving thousands of priests, and hundreds of Bishops and Cardinals and Pontiffs. AFP PHOTO

The one certainty about next pope? He’ll wear Gammarelli

ROME—Nobody knows what the measurements of the next pope will be so Gammarelli — tailors to the papacy since the 18th century — have produced vestments in small, medium and large just in case.

“We have prepared three vestments in white wool, a stole, red loafers, a skullcap, as well as a red velvet cape with a white fur border since it’s winter,” Lorenzo Gammarelli told AFP at the store in Rome.

“We can always adapt the vestments and the skullcap doesn’t change but it’s tricky with the loafers. The next pope cannot wear shoes that are not his size so we will offer all sizes,” he said.

It’s a delicate mission that Gammarelli’s expert tailors have been long accustomed to — as shown by the framed images of all the popes they have worked for on the walls of the old-worldy shop.

Proudly displayed in the store on a side street near the Pantheon in central Rome are also certificates that say the tailor is an official supplier to the Vatican.

“The fabric for the cassocks is pure wool. There is no special wool for the Holy Father. It’s the usual fabric that we use for all our clients who want to wear white,” Gammarelli said.

The shop appears like it has been unchanged for decades — from the old wooden counter to the stacks of rolls of fabric accessed by shopkeepers on wooden ladders.

A little spiral staircase leads up to the shop’s holy of holies — a workshop on the first floor where ordinary mortals are not allowed to go.

Gammarelli explained that between three and five tailors have worked on the papal vestments this time around — working in record time after Benedict XVI made the shock announcement on February 11 that he would step down.

“The conclave is an exceptional time,” he said.

“This time around it is even more so since we were not expecting at all. The resignation of the Holy Father really took us by surprise,” he said.

Benedict XVI, who now goes under the title of “pope emeritus”, stepped down as leader of the world’s 1.2 billion Catholics last Thursday.

“To be honest, when I first heard it, I couldn’t believe it. It seemed absurd,” Gammarelli said.

But the tailor did not add more on his views — a certain discretion is part and parcel of the job.

Asked how the delivery to the Vatican is made or who will put the finishing touches to the papal robes, Gammarelli offered only an enigmatic smile.

The conclave to elect popes is held in strictest secrecy in the Sistine Chapel. No date has been set but it is expected in the first half of March.

There is just one certainty: when the next pope emerges in front of the crowds in St Peter’s and with millions around the world watching, he will be dressed head to toe in Gammarelli.