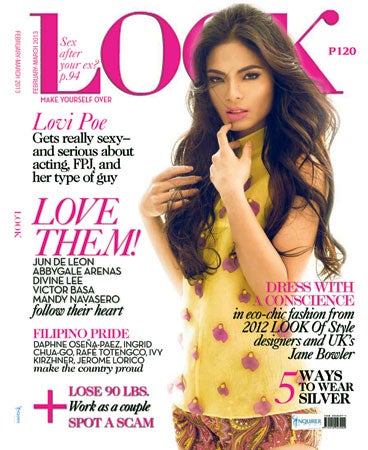 Despite friends’ well-intentioned warnings, two couples and a single mom pursued their respective relationships with an open mind—and the decision to simply go for it

By Tracey Paska and Joy Rojas

That worn-out wedding ring on Jun de Leon’s finger is a fitting symbol of his enduring 17-year marriage to supermodel, beauty queen, and image consultant Abbygale Arenas. “The best 17 years of my life,” says the veteran photographer. “For me, a marriage should give you wings. You don’t ‘own’ your wife. But that’s my opinion. I could be wrong.”

At any rate, it works for the power couple. In all their years together, Abby has never had any reason to doubt Jun, a self-confessed “slave to beauty” sought after for his stunning portraits of women and celebrities. Meanwhile, Jun is proud of his wife as a career woman, and insists she dress the part—high heels, makeup, and all. Happiest hanging out at home with their 11-year-old son Irijah, this couple “isn’t perfect. But we’re very happy,” says Abby. “We may not have all the money in the world, but we have all the love in the world.”

Love is certainly the secret to the staying power of a romance that seemed doomed from the start. “Her friends gave us a month,” says Jun, chuckling. Twenty years Abby’s senior, the photographer has seven kids from previous relationships. He’s also a stickler for time and an exacting artist with a temperament to match. Abby’s friend, makeup artist and fellow supermodel Lala Flores, cried when she learned they were an item. But Abby, who had her own set of suitors at the time, thought nothing of what others perceived as Jun’s flaws.  “I was looking for something wrong, but I didn’t see anything!” she says. “I guess I saw something in him that others didn’t see.”

Smitten with Abby the first time they met in a shoot when she was 18, Jun didn’t make his intentions known until three years later, when the two were en route to Dubai for another shoot. Treating her “like a princess” throughout the flight, the photographer spoke mostly about his kids, a quality that endeared him to the family-oriented Abby. Asked how he knew she was The One, Jun followed his gut.  “I thought I had everything,” he says. “Then I met her.”

Like all love stories, this one had its ups and downs, and the couple was, in fact, in a “cool-off” stage when Jun popped the question, complete with wedding rings and other pertinent documents. “I want to be the choice, not an option,” declared Jun, who then gave her a week to decide. After four days, Abby said “yes.”

Seventeen years later, this seemingly incompatible couple continues to bring out the best in each other. “I’ve become more confident because of him,” beams Abby, spokesperson of the cervical cancer awareness group, Bravehearts.

As for Jun, Abby, he says, has made him “a better person, a better husband.” The change is undeniable: cringing at words like “terror” and “strict,” the kinder, gentler Jun may have the final say in the de Leon household, but it’s usually something like “Yes, ma’am!” or “Right away, ma’am!” jokes Jun. “You don’t mess with the lady of the house,” he reminds.

Incidentally, Jun’s interview took place when Abby was in LA for the holidays. Scheduled to follow the day after, the photographer was obviously missing her, and admitted to counting the hours before she would be reunited with him and their son. “The house smells different without her,” he says. “I’m  happy feeling this way.” Joy Rojas

When Divine Lee and Victor Basa revealed their romance to friends, they didn’t expect an intervention. “They confronted us,” recalls Divine with some amusement. “They didn’t think it was a good idea, and that it would change our friendship dynamics.”

Overcoming their pals’ skepticism was only the start. Just out of other relationships, the couple was equally cautious. “Straight off the bat, we knew we wanted to be serious,” Victor confides. “But we weren’t going to waste each other’s time.” She adds, “We had to make sure of our feelings. It couldn’t be like, ‘Well, let’s end it because we’re bored’.”

Their commitment is evident, as Victor and Divine have weathered everything from cloudy days to full-blown storms since their union began. “Before we got together, we knew and accepted everything about each other,” she says, acknowledging their polar personalities. The dynamic social media maven is spontaneous, while the thoughtful actor and model prefers to be more measured in his actions. Together, their individual qualities help them handle any difficulties as one.

“I’m careful with my words, which can be hard to interpret,” says Victor. “She tells me to just say what I mean. If there’s a reaction, then at least I’ve said what I meant.” It’s the kind of advice one expects from the vivacious Divine, who readily shares aspects of her life on her blog and on Twitter. Between her online presence, Victor’s showbiz career, and their high-profile relationship, however, the couple has drawn detractors as well as admirers.

To start, they’ve shocked some by openly living together. “We were both being bashed, but our relationship is real. We’re just not doing it in traditional order,” says Divine. For Victor, criticism is part of the job. “If it’s about my acting, then I give it consideration to add energy to my work,” he explains. As an actor, “you have to be secure about it and not get riled up.” Divine agrees that he’ll let negative comments roll off his back. But when it comes to anonymous haters who have it out for his girl—watch out. “He’s very protective. He’ll block people from my account!” she says, laughing.

If only clicking “unfollow” could solve all problems: recently, Divine has been defending herself against critics linking her to the ongoing controversies surrounding her father, fugitive property developer Delfin Lee. Asked how she copes, she turned contemplative. “I’m always the first to criticize myself, so what’s left to criticize? When people do bash, it’s over something we have no control over,” she says. Through it all, Victor has been her stalwart support, coordinating with her friends to keep her occupied during the worst of events. “They say things like this can really test your relationship, and he has really been on top of everything. It was easy for me to weather it because I had him.”

For Victor, his devotion to Divine is simple. An equal partner during difficult times “expects something more from you and reminds you that you have to step up,” he states unequivocally. “As a couple, you make promises, and it’s your job to keep those promises.” Tracy Paska

‘I think a woman is naturally a mother. A woman is full of love’ –

After graduating with a degree in professional photography from Brooks Institute in Santa Barbara, California, in 1981, Mandy Navasero flew back to the Philippines and began her bohemian lifestyle. It seemed like every career girl’s dream, shooting glamorous, on-location pictures for a living and without a care in the world, but Mandy recalls those days as her loneliest.

“It was empty, I felt so empty,” she admits emphatically. “I’d attend all these events and mingle with society then come home to darkness.”

So when the opportunity to adopt an infant presented itself, Mandy grabbed it—not once, but four times. Starting with Julia, now 30, she then welcomed Kate, 29, then Amanda, 21, and finally Curt, 15. Other than the younger brother she took care of when they were growing up, and the orphans she looked after in conferences an older brother made her attend, Mandy knew little about rearing children single-handedly and on a full-time basis. Still, the thought of having a baby excited her, she says. “I think a woman is naturally a mother,” she reflects. “A woman is full of love.”

Indeed, love explains why Mandy never thought twice about her decision to take on four children, even when the going got rough. To fund their education, she not only drew on her earnings from her photography and PR work, but the generosity of true friends. And while she has blown her top at times—what parent hasn’t?—she’s also the first to say sorry and smoothen things out. “I didn’t realize raising kids was hard until now!” she exclaims with a laugh, then adds wistfully, “God always catches me in the nick of time.”

Today, whatever hardships she’s endured are clearly overshadowed by her obvious pride for her brood. Julia is a freelance photographer and graphic designer poised to take over her mom’s studio. Kate maintains two blogs and is on the staff of LOOK’s sister magazine, Cocoon. Amanda, who courts ideas of being a beauty queen, is nearly done with her tourism degree. And the six-foot-tall high school senior Curt is already an award-winning ballroom dancer.

Of the four, Mandy confides to loving Julia just a wee bit more, she being the first and the one she struggled with the most. Once a rebel, Julia would become a single mother herself, to Tyler, 10, and EJ, 8. It was the ultimate heartache for any parent, but after all was said and done, there was nothing left to do but love. Mandy, says Julia, is the quintessential doting grandma who prefers to be called “Mommy” instead of lola. “My kids tell my friends, ‘Mama’s okay. She’s strong just like Mommy,’” says Julia.

Years ago, Julia would have bristled at that comment. “But now I get her,” she says of Mandy. “She sacrificed a lot for us. In a way, I want to be like my mom, and I want my kids to view me the way they view my mom—a strong person.”

This Julia has proven time and again, stepping up as a second mother to her siblings whenever Mandy was away on assignment—or when she figured in a serious accident. Last year, the photographer’s car turned turtle after being hit by an overloaded vehicle. Julia rushed to the horrific scene and held Mandy’s hand until the ambulance arrived. At the hospital’s emergency room, she took charge, speaking to doctors and police, before calmly informing her shaken brother and sisters about what happened. Save for scratches and bruises, Mandy came out of the crash unscathed. “She’s tough!” says Julia of her mom with a laugh.