Shay Mitchell: ‘My Filipino family made me perform at every wedding when I was a kid!’ | Lifestyle.INQ ❮ ❯ 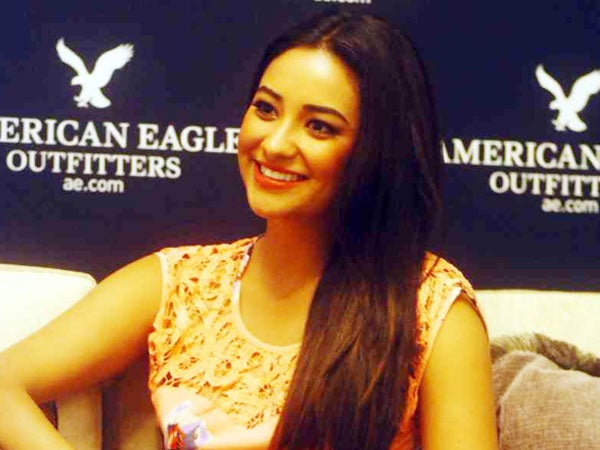 Shay Mitchell: ‘My Filipino family made me perform at every wedding when I was a kid!’

There’s truth to what Shay Mitchell says, that she could claim she’s half-Japanese/half-black, and you would have to believe her.

In fact, if we hadn’t known she was born to a Filipino mother and an Irish-Scottish father, we could’ve easily mistaken the statuesque Canadian-born actress for a Bollywood beauty, what with her olive skin and large almond eyes.

“I can pretend and you would believe me,” says Mitchell, the dusky star of “Pretty Little Liars,” who was here last week as a guest of Ben Chan for the opening of American Eagle Outfitters’ first store in the country, on Bonifacio High Street in Taguig.

Mitchell was born in Mississauga, Ontario, just outside Toronto, and moved with her family to Vancouver when she was 10. At age 17, the 5’8” stunner left home to pursue a modeling career in Bangkok and Hong Kong, a decision that “freaked out my mom a little bit,” she says. “Mom” is a Garcia from Pampanga who’s also a cousin of Lea Salonga.

When she transitioned into acting, the young woman had to vie for roles that called for blue-eyed blonde type of girls-next-door, an unpleasant throwback to her childhood growing up in a predominantly Caucasian community, where she stuck out like a sore thumb.

Even her role in “Liars” called for the same thing, she says.

To her luck, it seems time—and audiences—have become color-blind.

“Then I became that girl next door,” she says of her character Emily Fields in “Liars.” “So I don’t think there’s that thing anymore. The audience is more accepting. I’m also playing a lesbian in the show. I kind of really pushed it with that. I feel like that’s the kind of society we have right now. I think the writers and directors have a good pulse of what’s going on. It’s reality.”

Speaking of her lesbian character in “Liars,” she adds: “I grew up with a lot of family members who were gay. It’s just never been an issue for me. I’ve always said, and I will always say, love is love. You can’t really define it. I don’t think anybody needs to be defined. When my character came out, people were saying, ‘Is she a lesbian? Is she bi?’

“What does it matter? Today she likes girls, I don’t know what she’s gonna like in the future. I think you just have to be comfortable in your own skin, and live your life for you. You only have one life. I don’t wanna be somebody different only because that’s what’s accepted.”

It seems Mitchell’s outspokenness and easy likability have also resonated with the American Eagle people, who tapped the actress to represent the brand in a campaign last year. (Mitchell is not currently under American Eagle contract, according to an exec of the brand.)

“Look at her, she’s a natural!” says Simon Nankervis, the brand’s vice president for International Franchising and Global Business Development, as Mitchell made mock poses for the camera.

“A lot of brands have tried this ‘real people’ style of campaign before, but I don’t think it really resonated with their target customer. Shay’s a great fit for the brand. She’s very driven. Our message is real clothes, real people, and Shay embodies that for us.”

Mitchell was the brand’s guest when American Eagle opened its first store in Mexico last year.

“It’s great because I think a lot of people can identify with me,” says Mitchell, who’s learning Spanish to prep possible Spanish-speaking roles. She has Spanish lineage from both her parents. “There’s a little bit of everything,” she adds, laughing. “I’m a big mutt! But I like it!”

American Eagle is a denim and casual clothing brand founded in Pittsburgh in 1977 and aimed at the age 15-25 male and female market.

“No one sells denim more than us in the US,” says Nankervis. “We’re very focused on fit, quality and value. We don’t talk about price because we don’t see price as being the driver. What we see is, if you offer a great product at a great value, then the consumer will want to support the product.”

Freshness and variety appeal very much to its global customers, Nankervis adds. “We deliver four sets every month. Every three months, we refresh the whole store from front to back. In denim, we’re very focused on the washes, the fits, the fabrications.”

A section of the Taguig store is devoted to Aerie, the brand’s lingerie line.

He adds, “We don’t see ourselves as fast fashion. We don’t do a product that you buy now and throw away tomorrow. What we have are great staples for your wardrobe. We’re about pieces that will last you for a season. We’re not about being entry price points, that’s not what we stand for. We stand for value, for quality, the ability to buy one pair of jeans that you can wear with two, three kinds of tops. What we’re working on today as a company is to have a transformative supply chain so we can compete with the big brands.”

As for Mitchell, she flew to Boracay the day after her hosting duties at the store opening. It was only her second visit; last December, she and her mom spent time with relatives and visited Palawan.

“I’m very good at karaoke,” she says with a laugh. “Last time I was at Ben’s I sang for everybody. It’s embarrassing, I won’t do that again! Singing and dancing and performing—my [Filipino] family made me do that at every wedding when I was a kid!”

She would love to come out here more, Mitchell says. “Here if you’re an actress, a host, a singer, you are everything. In LA you can’t do that.” Then she adds, with a laugh: “Maybe I can release an album or something… Would you buy it?”