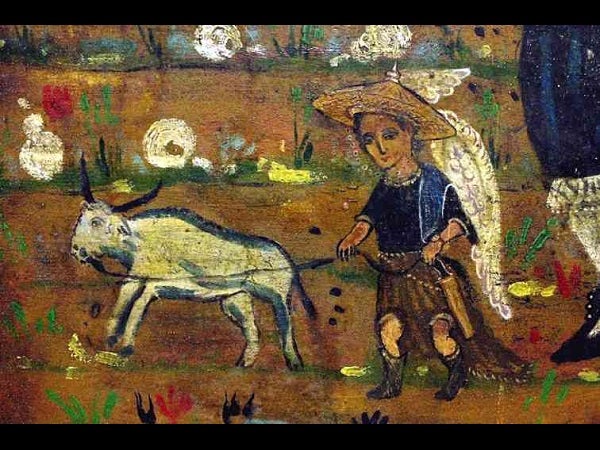 The defunct tradition of Bohol religious school paintings dating back to the Spanish colonial period has found an envoy and a savior in the new century.

Guy Custodio has come up with distinct versions of the religious art genre that used to be a staple in every house and church in Bohol during the 18th century—hence the art scholar’s term, “Bohol School paintings.”

Using molave wood (some as old as a century), the artist brings the Filipinos back to their cultural heritage, presenting works in bright Byzantine color schemes, stark symbolism, and deep religiosity.

Pinto Art Gallery, a haven of contemporary art, provides space for these 18th-century-inspired urnas, icons and triptychs, in the exhibit, “Urna: Catching the Spirit of a Heritage.” It opens today.

As it turns out, the monastery-like venue of Pinto high up in the hills of Antipolo could not have been a more suitable place for an exhibit of Bohol religious genre works.

The exhibition provides a window to the life and religiosity of the people of Bohol while showing subtle testimonies of the artist’s own story.

Custodio lived in Spain for more than 20 years. He was married to a Catalan, worked in the mornings, and lived a bohemian life the rest of the day, painting and producing music.

The artist’s deep appreciation of 17th-, 18th- and 19th-century Spanish art manifests in his works, which is not surprisingly similar to the ones found in the Philippines, one of Spain’s longest-held colonies.

One of the pieces on display is an icon of St. Cecilia, the patron saint of musicians, clad in the Vestida de Gala holding a young San Lorenzo Ruiz while gesturing at the stylized sun. A carved-out floral relief frames the visual narrative. It was painted and treated to look primitive—but certainly not wet behind the ears.

Also in the exhibit is a series of miniature retablos called urnas, one of which houses the Holy Family in a compartment mounted under a well-balanced composition of architectural and floral details.

The structure is elevated on a grada, a stair-like structure on both sides.

The pieces, even assembled with the traditional mortise and tenon, are made to look aged. Peeling and cracked, they exude the wisdom of genuine antiques.

But Custodio says that his works are not intended to be imitations, but rather original interpretations. The distinct appeal of his works comes from a wide collection of techniques and references from decades of exposure to the religious art genre.

Tracing back his two-decade stay in Spain reveals a rich background in restoration and conservation of antique arts.

After studying fine arts at the Los Angeles City College, he studied restoration and conservation in small workshops in Zamora, Salamanca and Barcelona from 1996 to 2004.

Custodio has learned from distinguished masters from Escuela de Artes y Antiguedades (EEART) and Istituto Centrale del Restauro. It was there that he worked with Spanish frescoes, panels and religious artifacts.

Saints and other sacred subjects have already graced his works as early as the ’80s. But it was the Filipino historian, José Marianito Luspo, who encouraged him to start painting in the traditional Bohol school style. Lawyer Lucas Nunag first commissioned him to do icons for the Amarela Resort in Panglao in 2008. Nunag has continued to back Custodio’s craft.

On his return to the Philippines, Custodio was commissioned to work on almost all the celebrated churches of Bohol, restoring through his own developed techniques the murals, retablos, and Stations of the Cross of his new hometown.

His projects can now be seen in the churches and chapels of Baclayon, Dauis, Panglao, Jagna, Tagbilaran, Alburquerque and Loboc.

As of now, his works can be seen in as far as the Church of the Saints in Las Piñas and, soon, in the Sitio Remedios Heritage Village in Currimao, Ilocos Norte.

Custodio, in his own method, keeps the Boholano heritage visible and involved in the lives of the people while introducing a new awareness to the Philippine art scene.

The artist’s 10th solo exhibit, “Urna: Catching the Spirit of a Heritage,” opens Sunday at the Pinto Art Gallery in Antipolo City.