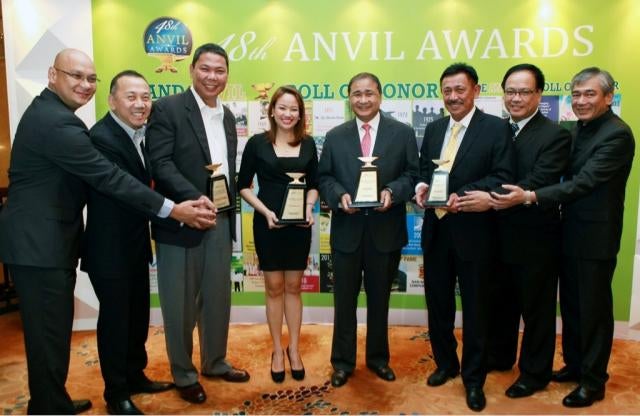 The Philippine Amusement and Gaming Corporation (PAGCOR) executives led by chairman and CEO Cristino Naguiat, Jr. (5th from left) are all smiles after the agency won four awards in the 48th Anvil Awards held at the Shangri-La hotel in Makati City on March 6, 2013.

This is the first time ever that the state-owned gaming firm was honored with four Anvil awards, it said in a statement on Sunday.

The two entries  of Pagcor that received Anvil’s “Award of Excellence” were the“Matuwid na Daan sa Silid Aralan Project” and the “PNOY Bayanihan Project” under the Public Relations (PR) Programs on a Sustained Basis (Education/Literacy category).

Both programs, Pagcor said, aimed to improve the country’s quality of education by building thousands of classrooms and school furnitures nationwide.

Through this endeavor, Pagcor and its partner agencies like the Department of Education (DepEd) hope to provide the Filipino youth with venues that are more conducive to learning.

Meanwhile, Pagcor’s “1st National Art Competition” under the PR Programs Directed at Specific Stakeholders (Creative Artists in the medium of Painting category) and “The Pagcor Insider” under the PR Tool (Internal Publication category) both received the “Award of Merit”.

The art competition aimed to capture on canvass the grandeur of the Philippine islands and showcase the ingenuity of Filipino artists using the government’s tourism campaign, “It’s more fun in the Philippines” as theme while the “Pagcor Insider” covers a variety of topics such as the agency’s essential contributions to nation-building, income updates, news its employees and various events of the corporation and its Casino Filipino branches.

“Winning an Anvil is a rare opportunity. Not everyone is given the chance to be recognized by the best PR practitioners in the industry and esteemed individuals from the academe, media, business and the government sectors,” said Pagcor’s assistant vice president for corporate communications Maricar Bautista.

“We are deeply honored that of almost 400 entries screened by the 48th Anvil Awards Committee, four of the six entries that Pagcor submitted stood out,”  Bautista added.

Yoly Crisanto, chairperson of the 48th Anvil Awards committee said they received 396 entries in 2012 which was almost twice the number of entries in 2011.

“If you win an Anvil this year, whether it’s an Award of Merit, Award of Excellence or the Hall of Fame, it really is excellent work because there were so many contenders,” Crisanto said.

But despite the huge turn-out of entries, she said, the number of winners this year even decreased.

“The judges are very conscious of taking the bar of excellence higher. From the first screening, more than half of the entries were already taken out. Then you reduce them again to get to the Merit Award,” she explained.

“It’s not an easy hurdle so I keep saying congratulations to all of you especially if you made it here at the 48th Anvil Awards. It’s really an excellent piece of PR work,” Crisanto added.

Considered as the most coveted prize in the PR sector, the Anvil Awards Committee receives hundreds of entries each year from both the private and public institutions

According to Vishnu Mohan, chairman of the Board of Jurors in the 48th Anvil Awards, the Anvil is a testimony of an organization’s commitment for continued excellence in PR practice.

“I have experienced firsthand the difficulty in choosing the winners which underscored the unquestionable value of communications in catalyzing the impact of PR programs to serve business and national interests,” Mohan said.

Barbie Atienza, one of the jurors in the 48th Anvil Awards said the board adheres to a certain level of excellence in classifying entries.

“For the entries to be considered winning pieces, they must have a very strong impact. Apart from detailed project objectives, they must also be well-presented and the results must be exceptional,” Atienza said.