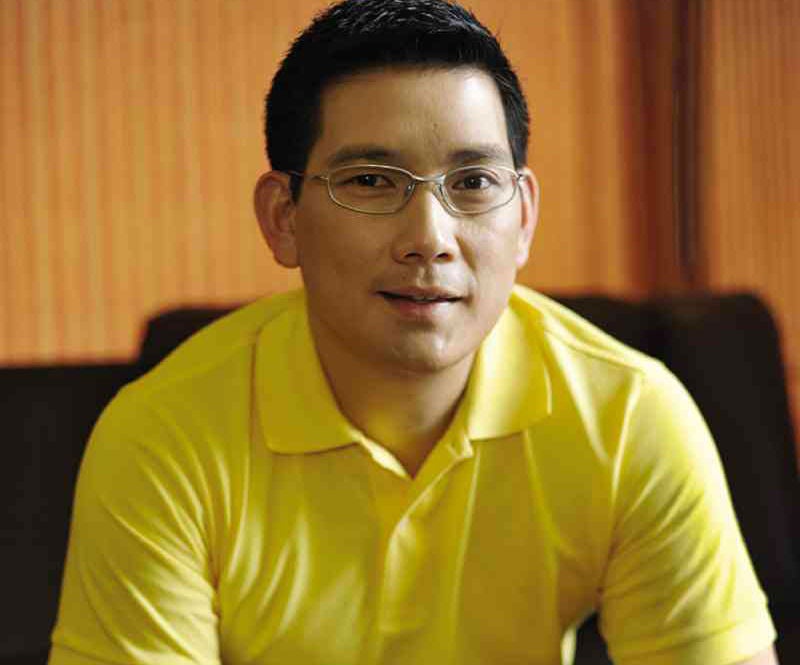 Hail to the (Sir) Chief

When photographer Jill Lejano’s mom learned that we were on our way to interview Richard “Sir Chief” Yap, she shrieked and demanded we bring home an autographed photo.

Her admiration to the “Be Careful With My Heart” star is mirrored by women fans of all ages around the Philippines, and even by those abroad who have access to The Filipino Channel (his fan club has both a local and international chapter).

His clean-cut, chinito good looks have long made him a mainstay in TV commercials, but his acting stint on the small screen is fairly recent. His first TV gig was in 2011 when he assumed the role of Chen Sy, father to Kim Chiu’s character in the teleserye “My Binondo Girl.”

Now popularly known as his television characters “Sir Chief” and “Papa Chen,” the actor believes he is able to relate well to father roles because he’s a dad himself.

This doting father to two kids aged 16 and 9, who plays a “strict” dad in the top-rating ABS-CBN show “Be Careful With My Heart,” says about “70 percent” of him is very much like his character Sir Chief: “In some ways I am strict, especially when it comes to my children’s studies.”

Richard credits the show’s success not only to its creators who have written a good story, and to its staff and actors for doing their parts well, but also to the fact that it deals with family values.

“It’s full of values and lessons in life. I think people relate to that,” he says. “They also want to be entertained. They feel good after watching the show.”

The actor, who can be seen on “Be Careful” on weekday mornings at 11:45, shares his thoughts on being a dad, his character and his TV “kilig-serye.”

Did you expect the amount of attention and fame your two roles have given you?

No, I was actually just doing this to try it out when I started with “My Binondo Girl.” There were no expectations whatsoever.

You started in the business pretty late—what were you doing before you became an actor?

I was a division manager in a furniture company.

How much has your life changed?

With the exposure on TV, you have to expect that people get to know you whenever you’re out there. The reception is very overwhelming because everywhere you go, people know you. You really lose your privacy in this business.

Do they call you by your character’s names?

Is it something your family has adjusted to?

Yeah, they’ve gotten used to it because it’s been happening for the past few months. I don’t think it’s something I’ll ever get used to.

Do your kids watch the show?

They’re in school (when it airs) so they can’t watch it. Sometimes they watch on Saturdays during replays.

And their classmates know that their dad is Sir Chief? How do they react?

Yes. Wala naman, I don’t think it’s a big deal to them because they’ve known me even before.

You play father roles quite well—how similar are you to Sir Chief in real life?

Siguro it’s quite near. Maybe 70 percent. It’s not that hard to play the part.

Are you as strict as Sir Chief in real life?

In some ways, especially when it comes to their studies. But for the rest, I let them do what they want as long as they’re not doing anything bad.

Yes, she did go to her prom. There was someone who asked her to be his date. The guy was from the same school so it was okay, we were there also, hinatid din namin then sinundo rin namin. Medyo hawig dun sa story. (Laughs)

You’re a pretty busy guy. How much time do you spend with your kids?

As much as possible, I spend it at home with my kids. Or we go out.

Usually, we just watch a movie, eat out or hang out at home. That’s the only thing we can do right now because of the schedule I have.

Sir Chief is a single dad—do you have any tips for single dads?

You just have to really give time to your kids because they grow up fast. The time that you lose, you’ll never get back… Because when they grow older, they won’t need you anymore.

What fitness regimen would you also recommend to dads?

I try to work out every day. It’s just something I do at home. I had a trainer teach me a few exercises before I leave the house. You also have to take care of your diet.

Not really. I just tell them not to make friends with anyone on the Net because it’s not safe. If people want to “follow” you, you have to have your privacy settings and all that. You have to be safe and secure because people can do so much on the Net now.

Do you still get nervous during shoots and tapings?

It depends on the scene that we’re doing.

What’s the best thing about being Sir Chief?

Because it’s near my personal character, it’s not so hard. That’s the best part. But there’s still a shift when I get to the character—I shift to Sir Chief.

Do you see yourself doing movies as well?

It’s possible. Movies are part of my contract.

And you sing as well—do you really sing?

I used to be in the glee club in high school, and we won in the regional competition, so I had a little bit of training before. But it wasn’t something that I was thinking I’d go into full time.

Did you have to do special acting workshops for your roles?

When “My Binondo Girl” started, after two taping days, I had a workshop with Direk Laurice Guillen for four hours. Before “Be Careful With My Heart,” we did a few workshops with Nonie Buencamino. But that was more on the relationship between me and Jodi (Sta. Maria), to get to know each other, to be at ease with each other.

To whom do you credit the show’s success?

Of course, to the writers and creators of the show. If you don’t have a good script, even with good actors, your show won’t fly. Also, the directors and all the staff for doing their part. I think…when they picked out the cast, they all clicked. It’s a combination of everything.

Do you think it’s also because the show is about family, and it resonates with Filipinos?

Yes, I think we’re doing a story that people can really relate to. It’s not overly dramatic, it’s something that happens in real life. It’s full of things you can pick up and use in your practical life. I think people relate to that. People want to be entertained. They’re happy when they see the show. I think that’s the main reason people want to see it—they feel good after watching it.

Do you want to break away from the dad roles?

If, one day, your kids tell you, “Dad, we want to join show biz,” what would you say to them?

After school. After you graduate from college.