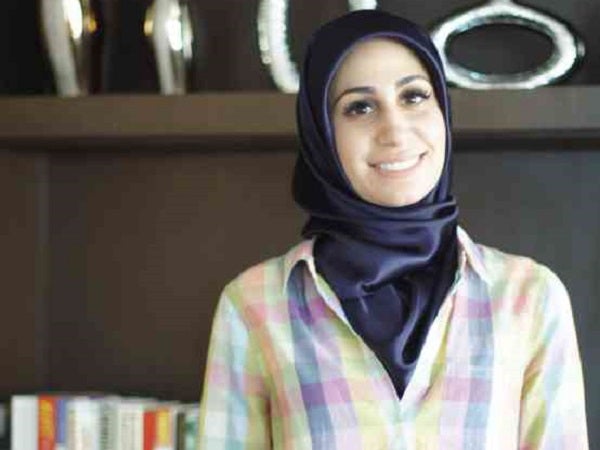 It’s very easy to get lost in the dystopian world that young adult author Tahereh Mafi has created. Her first book, “Shatter Me,” introduces us to Juliette, a young woman who has been locked up in solitary confinement because of her otherworldly ability of killing people with just her touch.

The premise smacks of “X-Men” or the gone-too-soon TV series “Alphas.” Of course, this being a young adult trilogy, there are cute guys involved, and they both want the girl. Mafi says though that the love triangle angle caught her by surprise. “I never really thought of this story as being a love triangle because I already know who she’s going to end up with,” she says.

It certainly wasn’t clear to us when we read the books, and despite our best efforts to wheedle the answer out of her, Mafi was mum on the subject. “My publisher will kill me,” she laughs.

Super sits down with Tahereh just before she left for Palawan to ask her about Warner’s moral ambiguity, writing in a vacuum and her glass boots.

Among your characters, whose power would you like to have the most?

I’d want the power to have all the powers, I’d be a super cheater. I guess maybe Kenji’s invisibility, that would be super cool. I wouldn’t want Juliette’s power which is to kill people. I’m not interested in that.

What real-life experiences have you had that ties into your character’s story?

At its core, this story is about a girl trying to find herself in a world trying to tell her who to be. I think that’s sort of the universal adolescent experience. That’s something I certainly experienced and something a lot of people go through. Every teenager goes through a time period where they’re trying to find themselves, who they are and how they fit in with the world and how they categorize themselves. I feel that it’s an adolescent experience taken into the extreme.

How was your adolescent experience?

In a lot of ways, Juliette is the kind of teenager I wish I could’ve been, because she’s so in the face of trying to find herself. Being locked up, of course, is a far more exacerbated situation, but in the face of all that she still has a lot of hope and optimism.

I was a really angry teenager. I was way more angsty emo and I think I wanted to write a story about a girl who could go through something really intense and difficult and challenging and come through it with grace, compassion and dignity.

Were Adam and Warner composites of the men in your life?

That would be interesting. I think writers are in some way inspired by their own personalities or by people they’ve met. Like Kenji, for example, is very much inspired by my brothers. He is so much the compilation of my brothers’ personalities. I can’t see that I actively or consciously was thinking of a particular person when I wrote these characters, but Warner I definitely wanted to be someone who would confuse readers. I wanted him to have moral ambiguity. Because the whole story is told through Juliette’s perspective, you’re seeing everything from her point of view which is not necessarily an accurate point of view … Oftentimes what we think we know about people is seldom true, and that’s what I was trying to do with Warner’s character. Question everything you thought you knew about him.

Did you always want to be a writer while growing up?

How did you become one?

I have been a lifelong reader. I’ve always read books but I never thought I could write a book. I always thought it seemed like a tremendously difficult undertaking, something I was not capable of. It wasn’t until after I graduated from college when I started reading a lot of young adult literature again. I fell in love with the genre all over again, like I had when I was younger and I knew I wanted to live in that world and I thought the best way to do that would be to immerse myself in it. That was the first time I ever thought maybe I could write a book of my own.

What was the first thing you did when you found out “Shatter Me” was going to be published?

I was at work. I got the call from my agent, I was wearing very tall shoes and I literally fell over. I sort of toppled over and then I went deaf like immediately, like I couldn’t hear anything anymore, I was just looking at my phone, my agent was talking and she had to keep repeating herself, and then I was like, “I have to go back to work now.” And then I called my mom and she was crying. I hadn’t said anything to anyone I was working with, and I didn’t leave for six months! So for six months I was like, “Nothing is happening in my life!” I’m just gonna be an assistant, pushing papers around. It was amazing.

What has been your craziest fan interaction?

Someone got a tattoo of the bird in my book. A couple of people have gotten tattoos based on the stuff in my book. I’ve met a couple of them, they showed me at signings and stuff.

Were the tattoos in inappropriate places?

No! One time a guy ripped his shirt open and asked me to sign on his chest, though. It was really uncomfortable.

You’re known for “defacing” your books. How did that come about?

I was procrastinating on working on my book. This was before “Unravel Me” came out and I had just gotten my author’s copies of the book. So I was really excited just looking at them because they weren’t in stores yet, and it was the first time I had seen it as a finished novel. I was supposed to be working on the third book but I wasn’t. I had taken the cover off, staring at it without its cover and it looked so pretty  because the cover of “Unravel Me” without the dust jacket is all-white and the title along the spine is in pink. I thought it’s so white and there was a Sharpie next to me and I just really wanted to draw all over it. But what do I draw? I love words as a form of art, I think they’re so beautiful, so why not just write all over it—I picked a quote I liked and started drawing all over it. I put it on Twitter and people were like, “I want that!” Then my publisher contacted me and asked if I could do it as a giveaway.

Do you Google yourself?

I definitely do not Google myself. Google scares me. I sometimes search the tags in Tumblr. Tumblr is a safe space. I’ve only done that recently since “Unravel Me” came out because I’m curious…

Do you ever get scared that some of the discussions online could affect your writing?

I definitely was when “Shatter Me” had just come out because I was still actively working on the series. I really wanted to write in a vacuum, to make sure that the story would be the way it was supposed to be in my head and not get affected by what other people want. Because it does have an effect on you … But I feel much safer now because I’ve written the third book. I’m just revising now, I know exactly what’s going to happen, and that’s not going to change.

Are you thinking of writing a spinoff about the other characters?

There have been talks about a film. Do you have your dream cast yet?

I really try not to think about that. Anyone I picture now would be too old by the time the movie was made. I don’t want to alienate my readers that I think the main character looks like this. I want them to imagine the characters exactly as they would want to.

Do you let anyone else read your work before it’s published?

The only person other than my agent and editor who has ever read my work in its rawest form is (fellow author) Ransom (Riggs). (“It’s really good even in its rawest form, like diamonds in the rough,” he confirms.)

When I’m actively writing/drafting, I get very obsessive about it and lock myself in my house. I just write all day, nonstop, no breaks. I sometimes remember to eat, but that’s it.

What do you like to do when you’re not writing?

I love traveling. I love doing stuff … DIY things, arts and crafts. I shop online a lot. I buy a lot of shoes. I’m on the Internet a lot.

What was your latest DIY project?

Recently I made some “Shatter Me” shoes. I bashed up a bunch of mirrors and glued them to a pair of old boots. They’re pretty heavy.

Why do you think love triangles appeal to readers?

I don’t think it’s appealing at all. I think in real life a love triangle is probably one of the most horrendous things you could ever be caught in the middle of. It seems like it would be extremely painful and complicated and just ugly.

What’s interesting though is that I never really thought of this story as being a love triangle because I already know who she’s going to end up with. When people started calling it a love triangle, I was like, “Really?” I’m not going to try to fight it because it seems like she’s torn between two guys, But in the third book it’s made very clear what’s going to happen.

Do you have a title for the third book?

It does not have one yet. I’m calling it “Untitle Me.” (Ransom Riggs): What about “Triangle Me”?