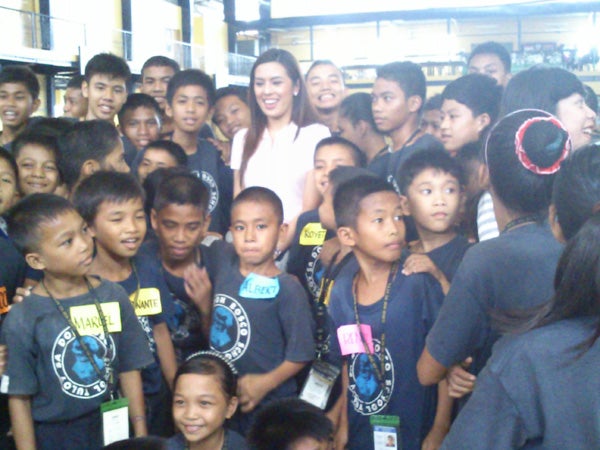 MANILA, Philippines – Children from Tuloy sa Don Bosco Street-children Village in Alabang, Muntinlupa City were treated on Friday to two stories of brave women—a grandmother who tried to save everybody from a tragedy using her extraordinary hair and a queen who helped a problematic tribe.

These children are mostly poor, abandoned and homeless. The Tuloy sa Don Bosco Streetchildren Village took them in, took care of them and taught values and attitudes they need to become effective members of society. Part of their education is teaching them technical courses.

“Para daw silang nasa 3D,” fellow teacher Len Dela Cruz said. Both teachers said they were amazed at how the 180 children devoured every bits and pieces of the story that was read to them by singer-actress Nikki Gil, Alitaptap’s Posh Develos and Ray Escasinos.

The “Pambihirang Buhok ni Lola” is about a grandmother who used her kilometre-long hair to save the houses and animals from being blown away when a typhoon hit their village.

“Alamat ng Papaya” is about Pya-a’s loyalty to their leader, Reyna Lingap and how their courage and loyalty led to the birth of the first Papaya fruit.

After every story, the children were asked questions about the books read to them and they eagerly raised their hands, trying to get the attention of the story-tellers and Read-Along host and INQUIRER Libre editor-in-chief Chito De La Vega.

Gil said at first she did not know what to do after seeing the children, some looked like they were only seven or eight while others were already in their teens.

“I am torn between trying to make the kid understand the story and trying not to make it boring for the older ones,” she said but in the end she said she was impressed at how responsive the children were.

“Sumisililp ako from what I am reading and I can see na nakatutok sila sa powerpoint presentation. You can see that they are really interested,” Gil said.

After the session, the children have shown their appreciation by performing Nikki Gil’s song, which goes “thank you for everything you do…I’m glowing inside because of you.”