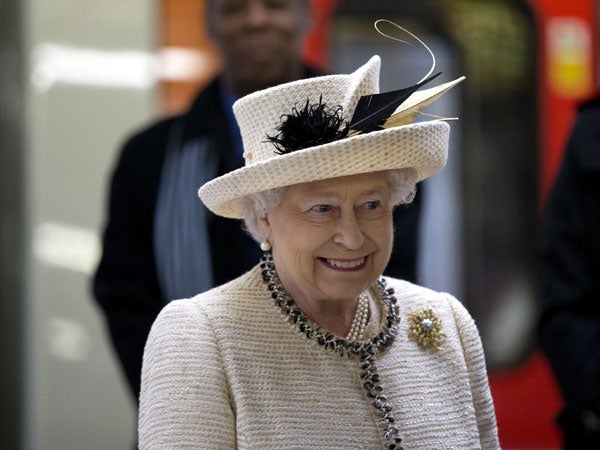 Britain's Queen Elizabeth II smiles as she visits Baker Street underground station in London, to mark the 150th anniversary of the London Underground, Wednesday, March 20, 2013. The Queen made her first public engagement in more than a week Wednesday after cancellations following her hospitalization for a stomach bug. The British head of state joined her husband Prince Philip and their granddaughter-in-law, Kate, for the event marking the 150th anniversary of London's sprawling subway system, affectionately known as the Tube. (AP Photo/Matt Dunham)

LONDON—Queen Elizabeth II needed no convincing to appear in a James Bond-themed skit during the opening ceremony of the London Olympics — in fact, she volunteered, according to the show’s director.

He tells ITV’s Jonathan Ross in an interview to air Saturday night that when he sought permission from officials to film the skit he heard back that not only was the video a go, but the monarch herself wanted to be in it.

Boyle says that when filming began, the queen asked him if he thought she should have a line, to which he replied “O.K., what do you suggest?”

“She said ‘I’ll do something’ and we started shooting and she turned round and she said her lines beautifully,” he said, according to excerpts of the interview released in advance.

The queen’s star turn in the skit was considered one of the highlights of the opening ceremony last year.

In the skit, a tuxedo-clad 007 strides into Buckingham Palace to escort his VIP guest to the Olympic ceremony. In her acting debut, Elizabeth swivels around in her desk chair to face the legendary spy and declares: “Good evening, Mr. Bond.”

Two of queen’s corgi dogs also appeared in the clip.