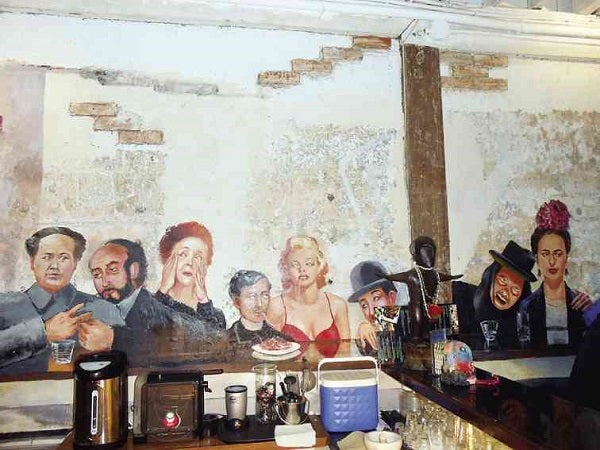 MURAL painting at the bar

They still call it Penguin

Back in the ’80s, nightlife in Manila was centered around the Remedios Circle area. The café society crowd would enjoy dining and talking at Café Adriatico, while those who preferred drinking while listening to a DJ playing records would walk over next door to Hard Rock Café.

But the more adventurous and restless types would cross Bocobo Street to soak in the bohemian vibe at Penguin Café—a club that doubled up as an art gallery where artists of all stripes, including poets, filmmakers and musicians, congregated.

Penguin was always an exciting choice to hang out with friends during our college years, and especially after we found work as a writer—no matter if the cash in our pocket then was good only for a beer or two.

Through the years Penguin even became a venue of live gigs featuring local alternative bands. We thought the club would live forever, until it closed down in 2009, because a Korean had bought the building where it stood.

Last year, the Internet was abuzz with talk that Penguin’s owner had found a new location to move and reopen the club, and that it has a new name, although people who’ve been there still refer to it as Penguin.

Now called The [email protected] (referring to its address at 1951 Adriatico St., a stone’s throw from Café Adriatico near the former Havana and Bistro Remedios), the “new Penguin” is run by business partners Eric Gonzalez and Butch Aldana. (The latter bought the rights to operate the old Penguin after original owner Ami Miciano sold it in 2004.)

The Bar occupies the space where the old Cosa Nostra Restaurant was.

“I told Butch, we’re not getting any younger, so we might as well do what we love most,” Gonzalez told Inquirer Lifestyle a few months ago when we first set foot at The Bar. Gonzalez, a geologist, was referring to the idea of picking up where the old Penguin left off, especially holding art exhibits and live gigs.

“Most of the bands that play here are my friends. They either approach me or I call them up,” said Aldana, a former member of the ethnic music group Pinikpikan.

The first gig we saw at The Bar featured Noli Aurillo, the brilliant guitarist who never fails to rock our brains out with the way he puts his own spin to Bob Dylan, The Beatles, The Doors, Eric Clapton and Led Zeppelin classics, plus some surprising takes on film soundtracks like “Over the Rainbow.”

Every first Friday of the month, Aurillo “blasts away” with what he calls “impromptu music” at The Bar with his group called the Brujo Skinheads.

The second time we visited, The Bar was full of foreign tourists who, Gonzalez said, have discovered the place and apparently loved it and they keep coming back.

The biggest difference between the old Penguin and The Bar is space; the former could accommodate only less than a hundred people while the latter is quite big and expansive—with a second floor, an adjoining room behind it and a loft above.

The bohemian vibe is still felt through the artworks that hang all over the place; the wall behind the actual bar on the ground floor is painted with historical icons in humorous, unconventional poses: Mao Zedong making hand signals to Luciano Pavarotti; José Rizal and Marilyn Monroe sharing spaghetti as Charlie Chaplin looks on; and the visual artist Santi Bose with his arm around Mexican painter Frida Kahlo.

One night, the controversial tour guide and cultural activist Carlos Celdran walked in to join some Caucasian friends.

Another night, filmmaker Lav Diaz was spotted having a good time with visual artist Dante Perez, journalist Juaniyo Arcellana and other colleagues from the pioneering music magazine Jingle Chordbook.

On other occasions, another controversial figure, actor Soliman Cruz, could be found chilling out alone or with a few friends.

But of course, the music played live completes the hip ambiance. One time, the former members of Bamboo, now called Hijo, performed a set of originals with infectious energy.

Last Wednesday, we went back to The Bar not knowing who was scheduled to play. A female acoustic guitar-vocal duo called Jaycie and Honey was covering The Police’s “Every Breath You Take” when we arrived.

The ladies sounded like amateurs; they actually flubbed the chords to “Every Little Thing She Does is Magic” and stopped playing after the first few lines of the lyrics. We were starting to feel sorry and disappointed with them until they began playing an original, “Sometimes It’s Okay,” which sounded fine.

Turned out that Jaycie (Tanseco) and Honey (Machuca) were school chums at La Salle Taft where they finished Communication Arts; music was a hobby they pursued 10 years ago.

One of their guy buddies went on to play interesting covers of Smashing Pumpkins (“1979”) and The Cure (“Just Like Heaven”). By that time, we were settled down upstairs, laughing at the jokes of a friend over San Mig Lights, which were a steal at P60 per bottle.