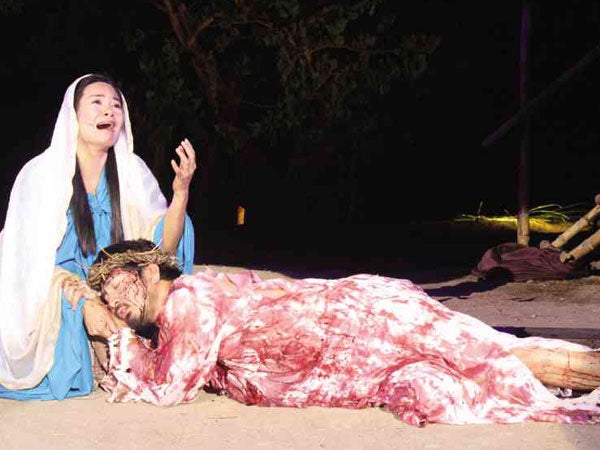 Passion in zarzuela revived after 113 years

STA. RITA, Pampanga—It is not an opera house, but Pampanga’s last defense against lahar from Mt. Pinatubo built in the mid-1990s by the administration of President Fidel V. Ramos.

But this is where this town staged the Passion in zarzuela form on Tuesday, the first time in 113 years that the Filipino version of the opera was used anywhere in the country to retell the Good Friday story.

“Tulauk” (“Rooster’s Crow”) played in the vernacular to an audience of about 4,000 people, including overseas Filipinos visiting from England and the United States, at the FVR Megadike.

The stage was a vegetable farm with two acacia trees and, lit by the full moon, it served well for the performance.

A cast of five priests and performers from the groups Ima at Arti and ArtiSta.Rita gave life to 17 all-original songs and 25 scenes that included Jesus Christ seeking forgiveness from the treacherous Judas.

For the people of Jerusalem, the zarzuela had the audience itself. Townspeople came with bread, candles and palm fronds and played the part of the Jerusalem crowd.

“We’re on Pope Francis mode. We have members of the cast who are rich but they have learned to be humble and agreed to do a show [in a place where there is] no air-conditioner,” said director Andy Alviz.

No zarzuela version of the Passion had been staged until “Tulauk,” said Robby Tantingco, executive director of the Center for Kapampangan Studies.

“What we had was cenakulo like ‘Misteryu ning Kalbaryu’ in the 1950s but it was not sung,” he said.

When zarzuela declined, Passion plays took its place, and among the performances was “Pasion y Muerto,” produced by Gonzalo Tantingco and directed by Sebastian de la Cruz in 1951, according to Tantingco.

Mariano Proceso Pabalan wrote “Ing Managpe” (“The Patcher”), hailed as the first zarzuela in any Philippine language, which Teatro Sabina performed in Bacolor town in 1900.

Robertson was there at the invitation of his good friend Alviz who choreographed “Miss Saigon” in Asia.  At the end of the show, Robertson told the Inquirer: “Doing outdoor performance is extremely difficult. The cast carried it. It was beautiful. The story is immortal and everlasting. It was well performed.”

Alviz used ordinary Kapampangan for the lyrics of the show, cast women in men’s roles, employed storytellers whose reflection on the Passion story gave “Tulauk” a distinctive Filipino interpretation of the Good Friday story. And he succeeded in portraying the Virgin Mary as a strong woman by casting in her role homegrown artist Rosette Aquino.

Alviz said he wrote the 25 scenes based on the Gospels of Matthew, Mark, Luke and John in the Kapampangan translation by the late Fr. Venancio Samson.

He wove the scenes around the stories of the birth and ministry of Jesus, His miracles and parables, the disciples, and, finally, His suffering, death and resurrection.

In the scene on Jesus’ entry into Jerusalem, the actors engaged the audience as a crowd welcoming the Messiah. They waved palm fronds as they sang “Alleluia.”

The multiplication of bread was reprised when the audience shared pieces of bread with one another.

Peter’s betrayal of Jesus and the Virgin Mary’s last encounter with her Son, sang by Fr. Valencia and Aquino, drew tears from many in the audience.

Alviz said the emotional connection must have been made not only because of the actors’ talent but also by his use of ordinary Kapampangan for the lyrics.

Jimson Mariano, 12, who sat transfixed during the full two-hour run of the show, said afterward, “I like that part where Christ said we should love our neighbors as we love ourselves.”

Pilar Mutuc, 62, a farmer, found the show “beautiful” and the cast “good.”

“Sitting here for just two hours made me recall the life of Christ,” she said. “I cried many times while watching.”