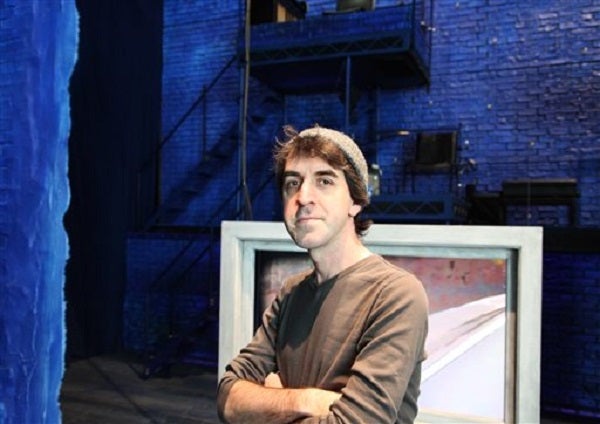 This Wednesday, March 27, 2013 photo shows songwriter Jason Robert Brown at Second Stage Theatre, where a revival of his show "The Last Five Years" is playing, in New York. The song cycle debuted in New York in 2002 and, despite a short run, has become a staple in regional theaters and colleges. AP/Mark Kennedy

NEW YORK—Inspiration can often come if you look up at the sky or the twinkling stars. For Jason Robert Brown, such a moment came when he was deep underground.

The songwriter was in the subway a dozen years ago on his way to a meeting at Lincoln Center with the fragment of an idea for his next project: It would be a song cycle about a husband and a wife in a troubled marriage.

But how would it work?

“As I was standing on that train platform, I thought, ‘Oh, if she goes backward in time and he goes forward, then I always know what to write about because I’m always catching up,'” Brown recalls. “I’m not particularly mystical but it does feel sort of divinely imposed that I figured that all out on a subway platform.”

The result was the 14-song show “The Last Five Years,” and a lot of people think it is pretty divine. The show debuted in New York in 2002 and, despite a short run, has become a staple in regional theaters and colleges.

It follows the collapse of the five-year marriage between an aspiring novelist and a budding actress from both points of view. The husband starts by falling in love and his wife begins at the end of their relationship, their voices only intertwining in a few, bittersweet moments. It is a story about how the pressure of careers and ambition can crush young love.

The show is getting some new high-profile attention these days: Second Stage Theatre has revived “The Last Five Years” with Brown in the director’s chair, and a movie version starts filming this summer with “Smash” star Jeremy Jordan and Anna Kendrick from “Up in the Air.”

That means revisiting a piece that has plenty of autobiographical elements for Brown, whose first marriage ended in divorce. Now 42, remarried and with two young daughters, he has a different perspective.

“There are a lot of layers to the way I experience the show at this point,” he says. “I look at it now and I don’t blame either of them. I just think, ‘Jesus Christ, this was impossible. What did you expect was going to happen?'”

Brown was coming off a bumpy Broadway ride when he came up with “The Last Five Years.” He had just seen his show “Parade,” the true-life tale of a 1915 Georgia lynching, hit Broadway. It would earn him a Tony but close after just 85 performances.

A two-person song cycle seemed a perfect antidote after such a big musical. “I wanted to do something that in case no one produced any of my shows anymore, which seemed like a possibility at the time, I could do it in my living room,” he says.

He wrote from the outside in, meaning the first and last songs were completed before he started penning the middle. The show debuted in Chicago in 2001 and then arrived off-Broadway the next year. Brown’s ex-wife asked for some material to be changed before the move.

“There are bits of her in both characters and bits of me certainly in both characters. But there’s also a lot of people who I dragged into the mix as well,” he says. “Emotionally, it is entirely autobiographical. Literally, only in pieces.”

“With Norbert and Sherie, it was very clear that they were both on the verge of these very big careers, and I think the exact same is true of Adam and Betsy,” he says. “I felt like I caught them at the last possible second before they jettison into space.”

Carole Rothman, the artistic director of Second Stage, ventured downtown to see the original show when it arrived in 2002 and was bewitched by its beautiful score.

“It’s emotionally very gripping to me. It draws you in. It has a wide appeal,” she says. “Jason this time was really looking for the emotion in it, even though he was more distant from it. He had a very clear vision of it and I think he accomplished it.”

The original show’s short life — the 9/11 attacks meant few people ventured downtown to see it — contributed to Brown’s disillusionment with commercial theater and he left America for several years, only to see “The Last Five Years” grown in popularity.

“It kept itself alive, which was good because I got so burned out after it closed in New York that I stopped writing for a long time,” he says. “Many years after I came back from the dead, I’m glad that the show was sort of there pulsing along underneath all that time.”

Brown, whose other works include the short-lived Broadway musicals “Urban Cowboy” and “13,” and another acclaimed song cycle “Songs for a New World,” is enjoying a purple patch of late.

Besides the revival and film of “The Last Five Years,” he’s got two new musicals debuting this year: “Honeymoon in Vegas,” an adaptation of the 1992 film written with Andrew Bergman that will premiere at New Jersey’s Paper Mill Playhouse, and “The Bridges of Madison County,” a musical he wrote with Marsha Norman that debuts at the Williamstown Theatre Festival in Massachusetts this summer.

Of “The Bridges of Madison County,” he says: “It’s a deeply romantic piece in the fullest sense of the word.” Of the silly “Honeymoon in Vegas,” he explains: “I wanted to write my version of an old-fashioned musical comedy. I wanted to write ‘Guys and Dolls.'”

Though he hasn’t had much luck on Broadway, Brown has come to terms with it. He’s never been interested in writing big, glitzy musicals, preferring intense character-driven pieces. As long as he keeps getting produced, he says he’s happy.

“I think there are times when you turn on the radio and there’s some song that comes on that does not belong there but everyone sort of loves it,” he says. “I’m hoping my work is just that: That I’m the weird thing that gets through and thrives in its own little way.”