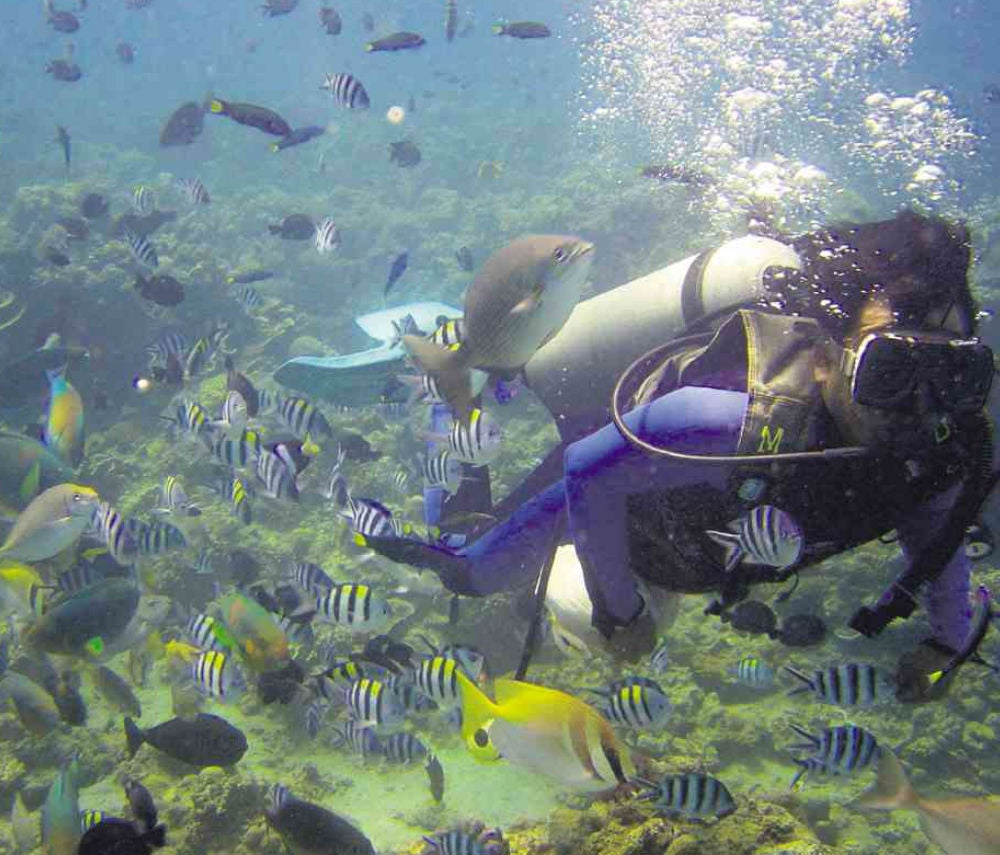 Frolicking among the fishes beneath the waves is one of the many pleasures that await visitors of what has been considered as among the best diving destinations in the world. INQUIRER PHOTO

As summer sizzles, the Philippines has been named the best diving destination in the Pacific and Indian Oceans together with Malaysia, the Department of Tourism (DOT) said on Tuesday.

A survey by Scuba Diving Magazine, through its website www.scubadiving.com, showed that scuba divers considered the Philippines and Malaysia the best diving destinations in this part of the world.

“The website is host to the most knowledgeable and honest community of real divers from all over the world on the Internet,” said Karen Chan, executive director of the DOT’s Philippine Commission on Sports Scuba Diving.

“Likewise, we placed third as best destination overall for diving, topside, adventure, nightlife and others, also in the Pacific and Indian Ocean regions,” she said.

Chan also pointed out that Atlantis Beach Resort in Dumaguete City was named among the best dive resorts in the world.

“We have a lot of dive sites from Tubbataha; the whole island of Cebu from Malapascua in the north to Moalboal in the south; and of course, Anilao in Batangas,” she said.

“In fact, 15 percent of foreign tourists who arrive in the country come here for diving,” she added.

The Philippines still has 500 “mostly unexplored dive sites,” said Benedict Reyes, president of the Philippine Association on Underwater Activities and a board member of the Asian Underwater Federation.

“If developed, [these dive sites] may give the country the distinction of being Asia’s dive capital,” Reyes said.

‘Center of the center’

“In fact, the Philippines is already being regarded by many foreign divers as the ‘center of the center’ of diving in the world,” he added.

Reyes is the main proponent of the World Underwater Federation General Assembly, which will be held at Shangri-La Mactan Resort and Spa from April 17 to 23.

The assembly will gather around 150 federation leaders who are key movers in underwater activities throughout the world.

To take advantage of this gathering, the DOT is holding the country’s first international dive expo, also at Shangri-La Mactan from April 18 to 21.

Dubbed World DEEP (Dive Expo and Exhibition Philippines), the expo aims to make world-class diving destinations in the country known to the world.

“The Philippines is one big dive site,” Reyes said.

The DOT said World DEEP would also put in the limelight alternative underwater sports not yet booming in the country.

It said the expo would have seminars on fin swimming, underwater photography, underwater wrestling or aquathlon, and breath-hold diving, or apnoea diving.