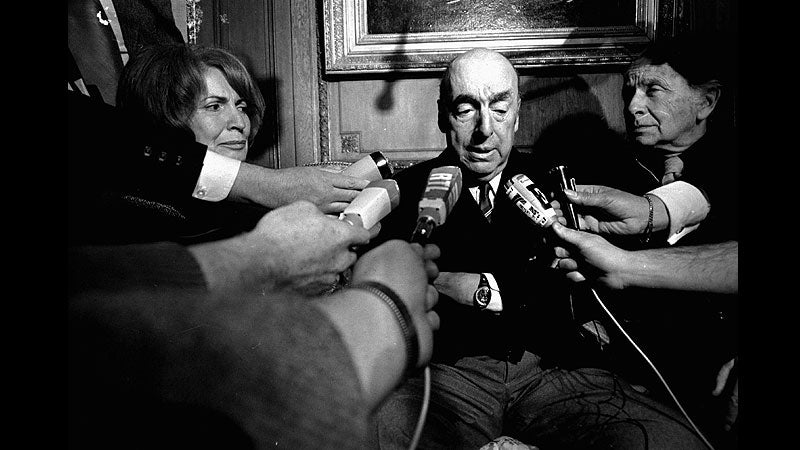 Pablo Neruda in a photo taken on Oct. 21, 1971, talking with reporters in Paris after being named the 1971 Nobel Prize for Literature. AP file photo

SANTIAGO—The remains of Chilean Nobel prize winning poet Pablo Neruda will be exhumed Monday to determine if he died of cancer or was poisoned, according to the judge on the case.

The leftist, who died 12 days after the 1973 military coup that ousted socialist president Salvador Allende and brought General Augusto Pinochet to power, was long believed to have died of prostate cancer.

But officials in 2011 started looking into the possibility he was poisoned by agents of the Pinochet regime, as claimed by Neruda’s driver.

The poet’s body is to be exhumed Monday at 8 am local time (1100 GMT), though the digging will begin on Sunday, Judge Mario Carroza said.

The remains will then be examined by Chilean and foreign experts to rule out or confirm the accusation of Neruda’s driver, Manuel Araya, who has declared publicly that Pinochet agents poisoned Neruda while he was hospitalized with cancer.

Neruda is buried next to his wife Matilde Urrutia in Isla Negra, 120 kilometers (75 miles) west of the capital Santiago.

He won the 1971 Nobel Prize in Literature and is best known for his love poems, as well as his “Canto General”—an epic poem about South America’s history and its people.

The Chilean justice system gave the go-ahead for a probe in June 2011 after a complaint was filed by the Chilean Communist Party.

In addition to the driver’s accusations, the official complaint cites witnesses who say Neruda was healthy up until the day before his death. They said he did not exhibit symptoms consistent with the advanced cancer he was said to have died of.

Neruda’s family and the official foundation that administers his work have both accepted the official cause of death, saying in a 2011 statement that there was “no evidence or proof” to suggest foul play.