This summer, why not learn how to act on stage…and more | Inquirer Lifestyle 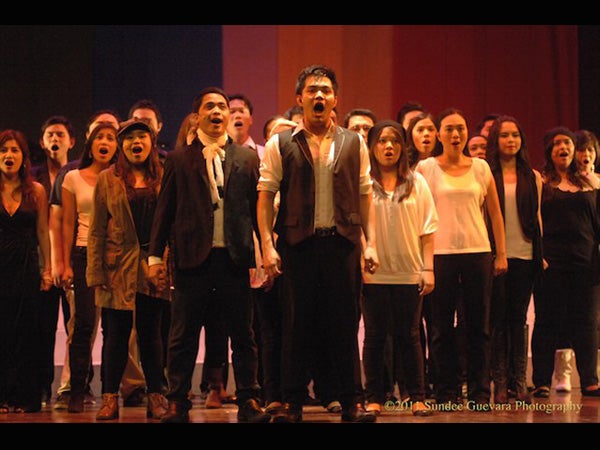 This summer, why not learn how to act on stage…and more

MANILA, Philippines—This summer, why not bring theater appreciation to the next level by learning how to act? Various theater groups are conducting acting workshops—basic and advance—fit for children, teenagers and adults.

Then again, could a month-long training be enough?

“One summer will not make one an actor already because the craft is a lifelong study but it will certainly teach the child (or student) to appreciate his/her God-given talent and start him/her on the road to self discovery,” says well-known veteran of the stage, actor-director-singer-producer Audie Gemora.

‘If only to understand yourself better, learning how to act is a big help,” says another veteran of the live stage, actor-director Fernando ‘Tata’ Nanding Josef.

Josef is artistic director of Tanghalang Pilipino (TP), the resident theater group of the Cultural Center of the Philippines. This summer he will facilitate advance classes on “Acting for TV, Film and Commercials”.

Gemora co-runs Trumpets, Stages Inc. and the soon-to-open Talent School Of Academics and the Arts in Makati City.

Besides acting, various theater groups run workshops on directing, stage design, lighting design, singing, dancing and even playwriting. Each offers its own time-tested techniques that a student can choose.

Workshops at the CCP

If location is a major consideration, TP offers a month-long program conducted in various venues right inside the CCP building.

This could be ideal for residents of Manila, Makati and nearby cities and municipalities in Cavite like Bacoor, Imus and Dasmariñas, where most TP actors reside.
TP’s program ends with a recital held at the CCP’s 220-seat Experimental Theater or the Tanghalang Huseng Batute, “where students get the chance to be seen by talent scouts.”

Beginning acting (17 years old and above) is described “a practical application of the rudiments of acting, including concentration, spontaneity, improvisation, confidence, body and voice preparation, characterization and script analysis to create a unique, authentic life on stage.” This is facilitated by Tuxqs Rutaquio (Ada/Zsa Zsa Zaturnahh) and Niccolo Magno.

Though most of them took up different courses in college, the facilitators are also products of summer workshops.

Tadioan or Tad is a Mass Communications graduate from Far Eastern University who took the 2005 TP summer workshop. Though De Vera finished theater arts in Ateneo, she still availed of   TP’s acting class in 2008. In 2012, in the same batch were Magno, (creative writing major), Mateo (hotel and restaurant management), Dayao (accounting) and Cadag (biology).  Viana is reportedly an electronics engineering graduate.
There is also production and stage management course facilitated by Ed Murillo

TP also offers customized workshop in any organization or school as far as the provinces.

Ideal for those in the Quezon City area, the Peta workshops are conducted at the Peta Theater Center at number 5 Eymard Drive, Brgy. Kristong Hari, New Manila. The 50-year-old theater organization uses its unique Integrated Theater Arts approach, which “combines the different disciplines of theater, such as creative drama, sounds and music, body movements and dance, creative writing, and visual arts.”

Besides the usual courses, Peta also offers Theater in Education series for educators.

In a recent statement, Peta says due to the increasing number of summer workshop applicants, its School of People’s Theater recently opened four additional classes of its most in-demand courses: Children’s Theater, Teen Theater and Theater Arts.

“PETA’s summer courses, which range from acting for beginners to advanced training for professional actors and teachers, attract a lot of applicants every year because of its unique and comprehensive program,” said Peta.

“Throughout Peta’s 45-years of experience in educational theater and cultural work, Bitaw has been the company’s main foundation in all of its trainings including those conducted in the provinces of the Philippines, regional coverage in Asia, Europe and Latin America.

“Peta’s student-centered workshops also highlight the limitless creative potential of each participant, allowing students to fully express themselves, boost their confidence, and mount their own stories into original productions.

“The month-long classes held at The Peta Theater Center are culminated by a full showcase at the 400-seater Peta-Phinma Theater, giving each participant the chance to shine under the limelight of a legitimate stage.”

Gemora discusses Trumpets Playshop, which is celebrating its 20th anniversary.

Practically all the current young theater actors studied at Playshop. And all the streetdancing clubs in schools had their origins with Playshop.

Playshop 2013 starts on April 8 in its Musicademy main studio at the 5th level of Shangri-La Mall and its satellite branches at the Podium, Alabang and Global City. Inquiries at 6362842 and 6317252 or visit www.trumpetsplayshop.com.

Not exactly a new kid on the block, 9 Works Theatrical has developed its own approach for its three Stage Camp summer theater workshops—Kiddie & Pre-Teen Camp, Teen Camp and Adult Camp—now on its fourth year at the Loft, Manansala Tower in Rockwell Center, Makati City

“It’s a very personal and hands-on approach to our campers. It’s a relationship and continuous learning that extends outside of workshop’s four walls,” says Robbie Guevara, artistic director of 9 Works Theatrical.

The workshops are scheduled from April 8 to May 26 at the Loft, or a total of six weeks with a culminating showcase on either May 25 or 26 at the Carlos P. Romulo Auditorium in RCBC.

“Being an actor is a long process but enrolling in a summer workshop in musical theater is a step to prepare yourself to be an actor. Enrolling hones your talent.  It teaches you the proper techniques and gives you a chance to experience what is like to be on stage,” he said.

He added: “To be an actor it requires a lot of things—a continuous training in singing, dancing and acting, you must be expose in all field of arts, always update yourself on the things that are happening in the world of theatre and you must have the discipline and passion to it. If you are an actor you must never stop from learning.”

Repertory Philippines, one of the longest-running theater company, also offers its workshops for kids, pre-teens and adults starting April 8 in three venues; Legaspi Village in Makati City, Bonifacio Global City in Taguig City and in its Ortigas main rehearsal studio.

For Makati: Advance acting classes will be handled by Joel Trinidad