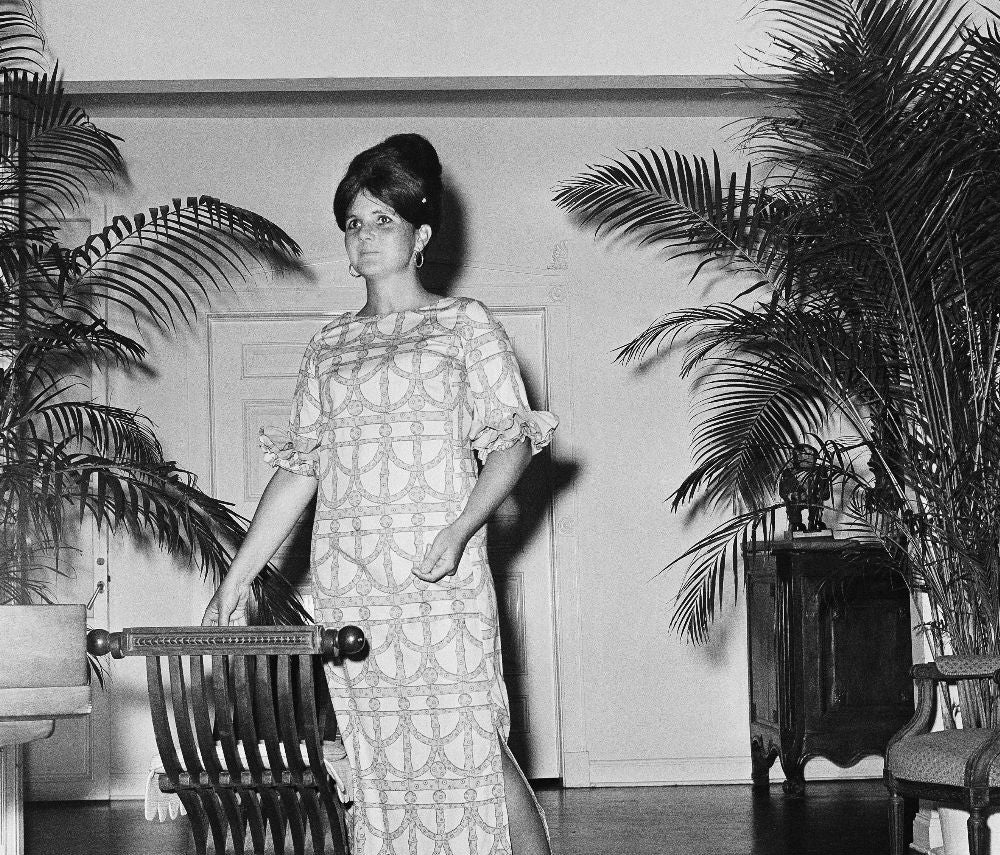 In this March 16, 1965, file photo, fashion designer Lilly Pulitzer wears her own design and creation of the Lilly shift in Palm Beach, Florida. Pulitzer, known for her tropical print dresses, died in Florida at 81. AP PHOTO/ROBERT H. HOUSTON

MIAMI—Lilly Pulitzer, a Palm Beach socialite turned fashion designer whose tropical print dresses became a sensation in the 1960s and later a fashion classic, died Sunday. She was 81.

Her death was confirmed by Gale Schiffman of Quattlebaum Funeral and Cremation Services in West Palm Beach. She did not know Pulitzer’s cause of death.

Pulitzer, who married into the famous newspaper family, got her start in fashion by spilling orange juice on her clothes. A rich housewife with time to spare and a husband who owned orange groves, she opened a juice stand in 1959, and asked her seamstress to make dresses in colorful prints that would camouflage fruit stains.

The dresses hung on a pipe behind her juice stand and soon outsold her drinks. The company’s dresses, developed with the help of partner Laura Robbins, a former fashion editor, soon caught on.

“Lilly has been a true inspiration to us and we will miss her,” according to a statement on the Lilly Pulitzer brand Facebook page. “In the days and weeks ahead we will celebrate all that Lilly meant to us. Lilly was a true original who has brought together generations through her bright and happy mark on the world.”

Jacqueline Kennedy, who attended boarding school with Pulitzer, even wore one of the sleeveless shifts in a Life magazine photo spread, and matriarch Rose Kennedy and one of her teenage granddaughters were once reported to have bought nearly identical versions together.

“I designed collections around whatever struck my fancy … fruits, vegetables, politics, or peacocks! I entered in with no business sense. It was a total change of life for me, but it made people happy,” Pulitzer told the The Associated Press in March 2009.

The line of dresses that bore her name was later expanded to swimsuits, country club attire, children’s clothing, a home collection and a limited selection of menswear.

“Style isn’t just about what you wear, it’s about how you live,” Pulitzer said in 2004.

“We focus on the best, fun and happy things, and people want that. Being happy never goes out of style,” she said.

In 1966, The Washington Post reported that the dresses were “so popular that at the Southampton Lilly shop on Job’s Lane they are proudly put in clear plastic bags tied gaily with ribbons so that all the world may see the Lilly of your choice. It’s like carrying your own racing colors or flying a yacht flag for identification.”

But changing taste brought trouble. Pulitzer closed her original company in the mid-1980s after filing for bankruptcy protection. The label was revived about a decade later after being acquired by Pennsylvania-based Sugartown Worldwide Inc.; Pulitzer was only marginally involved in the new business but continued reviewing new prints from Florida.

“When Lilly started the business back in the ’60s, she targeted a young customer because she was young,” the company’s president, Jim Bradbeer, told the AP in 2003. “What we have done is target the daughter and granddaughter of that original customer.”

Pulitzer herself retired from day-to-day operations in 1993, although she remained a consultant for the brand.

Sugartown Worldwide was bought by Atlanta-based Oxford Industries in 2010. Sales of the Lilly Pulitzer brand were strong in the earnings period that ended Feb. 2. The brand’s revenue increased 26 percent to $29.1 million, according to Oxford Industries’ earnings report. The company said last week it planned to add four to six new stores each year for its Lily Pulitzer brand.

In 1952, she married Pete Pulitzer, the grandson of newspaper publisher Joseph Pulitzer, whose bequest to Columbia University established the Pulitzer Prize. They divorced in 1969. Her second husband, Enrique Rousseau, died in 1993.

“I don’t know how to explain what it was like to run my business, the joy of every day,” she told Vanity Fair magazine in a story in 2003. “I got a kick every time I went into the shipping department. … I loved seeing (the dresses) going out the door. I loved them selling in the shop. I liked them on the body. Everything. There’s no explaining the fun I had.”

Pulitzer, who was known for hosting parties barefoot at her Palm Beach home, also published two guides to entertaining.

“That’s what life is all about: Let’s have a party. Let’s have it tonight,” she said.—Jennifer Kay