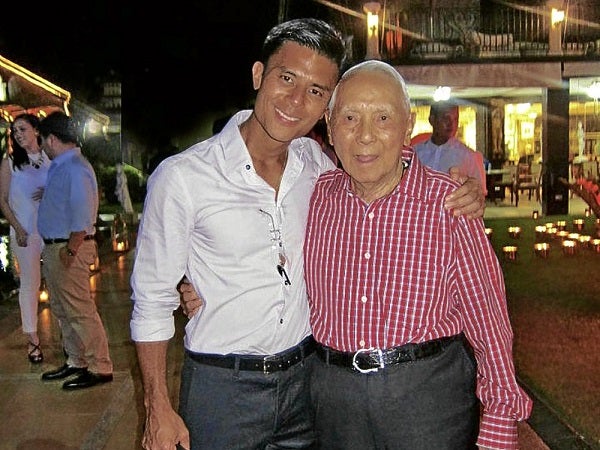 What a milestone: Tantoco turns 92

When God created man, one of His most durable creations must be Ambassador Bienvenido R. Tantoco Sr.

Fr. Caluag did say that before he makes travel plans, he takes into account the date and country venue of Ambassador Tantoco’s birthday, for it is the one day in the year that he wouldn’t want to miss.

The event started promptly at 4 in the afternoon, and every minute thereafter became an event in itself.

Soon after the concluding rites and the birthday songs sung by the choir, singer Vina Morales upped the tempo with disco music of the ’70s and ended her repertoire with a very aptly worded song, “Wind Beneath My Wings.”

Japanese cuisine caterer Sugi did not disappoint. The buffet table was laid out with some of the restaurant’s most popular dishes of sushi and sashimi boats, chicken teriyaki and shrimp tempura.

Conversation flowed freely, even between people who had not met before this party. They had a common denominator—a close friendship with the ambassador.

Speeches were prepared and delivered, none of them saccharine, and, generally, unabashedly emotional. It was evident that the ambassador was not only loved, but highly respected, as well.

One brave granddaughter-in -law, Nina Huang, who brought her codigo to mitigate the shedding of tears, did not make it past the first sentence.  The codigo did not work.  She called supportive husband Anton Huang to the rescue!

Anton became the evening’s “911” emergency number for near-breakdowns. Favorite daughter-in-law Nena Tantoco narrated how Lolo Benny would collect her children from school and take them to ice-cream parlors. Eddie Pineda, Ado Escudero, Susing Pineda, Jun Tambunting, Pepe Rodriguez, Gippy Tantoco, etc., all paid tribute to the man for his friendship and his sincerity.

Love, indeed, was in the air.

When emcees Donnie and Nicole Tantoco announced that guests would all have to troop down to the garden for dessert and some more entertainment, the thought of suffering from Manila’s summer heat became worrying. But even that had been taken care of, for behind each Moroccan tent was a gigantic and efficient air-conditioner.

As guests descended to the garden, Moroccan music played and the charming and ever-smiling, hip-swaying belly dancers of Jill Crisologo offered a unique welcome. Upon their exit, the second part of the program began. The night was young. The guests settled in the Moroccan-inspired living room set designed by Majorelle.

The birthday cake was brought to the front of the stage, and the ambassador and all of his children—Rico, Nedy, Menchu, Marilou, Marilen and Maritess (Tokie)—took their places behind him.  They were joined by their  spouses Nena, Patrick, Eddie and Renato.

Another surprise was revealed—soprano Rachelle Gerodias. In glittery Moroccan attire, she led the singing of the birthday song. The birthday celebrator made his wish and blew the candles. (For a man who has everything, what could he have possibly wished for?)

“I’m happy not to pop out of a cake,” Rachelle declared.

A party can’t have Rachelle and not have her sing!  She sang “Quando Men Vo” and “Think of Me.”  Then she brought us all up to higher stratosphere when she delivered a faultless “Ano Kaya ang Kapalaran?” and “Mutya ng Pasig.”

But the last thread that coaxed a big wide smile on Tito Benny’s countenance was his all-time favorite, “Minamahal Kita.” The song must have brought a flood of memories of his youth and his life with his late wife Tita Glecy.

A grand piano onstage deserves a genius behind it. CCP president Raul Sunico played and floated us through Franz Lizst’s “Liebestraum” and Abelardo’s “Nocturne.”  The third and last piece was Gershwin’s  classic “Rhapsody in Blue” for solo piano, whose ebony and ivory keys he stroked sans a music sheet.

How does one organize an event meant for many generations—from toddlers to adults in their 50s, 60s and 70s?  It would have to be wholesome enough for the kids to watch, and entertaining enough for the adults.

The requirement was no doubt met by a wonderfully choreographed jazz number to Beyonce’s “Fever” by two very talented and very young dancers from the clan. Nikki and Isabel Huang couldn’t have us believe that they were merely 12 and 8 years old.  Really? Gotta see their birth certificates!  They looked young, but they danced like the pros on “Dancing with the Stars.”

Families come and go, and third generations have a reputation. This generation will continue to hold the torch for what was started by the ambassador and his wife more than 60 years ago.

The entire evening, no one tried to steal the limelight from the honoree. He was the star of the night. Everyone knew and recognized that, which is a feat, with more than 100 people around, and many of them kids who would have loved to “interrupt.”

There was a rule of silence, and this rule was adhered to without much effort. There were no tantrums, no whimpers, no baby’s cry.

With all of the above million little things falling into place, God indeed must have been telling Tito Benny something. The words would have been, “Benny, you are doing a very fine job!”