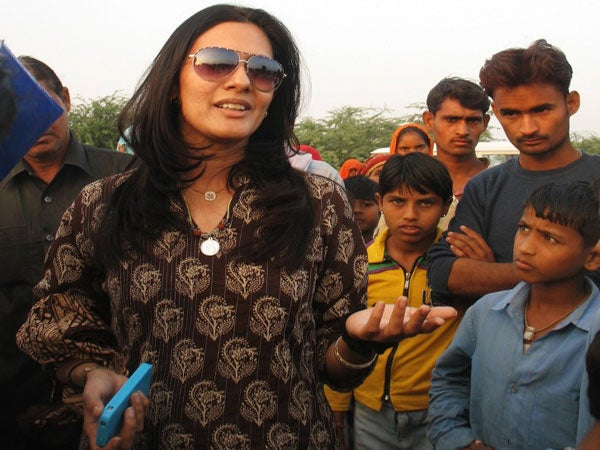 In this photograph taken on November 19, 2012, headwoman Chhavi Rajawat interacts with villagers in Soda, a remote village in India's Rajasthan state. The Indian MBA graduate is a one-woman whirlwind as she seeks to catapult her impoverished ancestral village in the desert state of Rajasthan into the 21st century. AFP PHOTO/PENNY MACRAE

SODA, India—Chhavi Rajawat, an MBA graduate and one-woman whirlwind, is seeking to drag her impoverished ancestral village in the desert state of Rajasthan into the 21st century.

Rajawat, who spent her family holidays in sun-scorched Soda, became its sarpanch, or elected village head, three years ago after villagers implored her to take charge with dozens turning up at her home in state capital Jaipur to persuade her.

“The villagers broke all caste, gender and religious barriers to elect me,” said Rajawat, a glamorous 33-year-old whose 10,000 constituents are mostly farmers and laborers largely untouched by India’s economic boom.

She ditched her corporate career with one of India’s biggest telecom firms to become sarpanch and has been working ever since to bring better water, solar power, paved roads, toilets and a bank to her ancestral village.

Soda is a byword for backwardness in this remote corner of Rajasthan where the houses are made of mud, electricity supplies are erratic, literacy levels are below 50 percent and the fear of drought is never far away.

The villagers said there had been no progress since Rajawat’s brigadier grandfather, now in his 90s, had served as sarpanch two decades ago and they wanted someone else in the family to take on the role.

“I didn’t have a choice,” said a smiling Rajawat, who represented India at a recent UN poverty summit.

Her story reveals the potential of good grassroots leadership in making a difference in a country plagued by corruption and inefficiency. It also shows the limitations.

Swarmed by villagers as she walks down the road, Rajawat greets them by name as they share family news and pepper her with questions about progress on various projects.

“Nobody has been able to do what she has done—no other sarpanch has done as much,” said 30-year-old farmer Jai Singh.

Rajawat was visiting a computer center in a no-frills stone structure that she set up with the help of a corporate sponsor. The spartan interior doesn’t bother the youngsters who tap away eagerly on keyboards on long trestle tables.

“It’s a huge opportunity for them to get some skills—there was nothing before,” said teacher Mohammed Sadeek, 25.

But Rajawat, who now divides her time between Soda and Jaipur, chafes impatiently at the sluggish pace of change.

“India can’t keep advancing at the same slow rate—it must go faster. Otherwise we won’t be able to give people the schools, the electricity, the water and the jobs they need,” she said.

She was also checking on the progress of a scheme equipping primitive homes with toilets, which have made a big difference to locals who earlier had to relieve themselves outside—and the women only after darkness set in.

There are many women sarpanchs in India because a number of these posts are reserved for them. But what sets Rajawat apart—aside from her iPhone, big-rimmed sunglasses, blue jeans and youth—is her education.

She holds a master’s degree in business administration from the Indian Institute of Modern Management in Pune, rated one of the nation’s top 10 business schools, which she says helps her draft funding plans and proposals.

“She’s unique. We need her kind of people, they are a breath of fresh air, they have vision,” said government district collector Muktanand Agarwal.

Among the achievements is her arrangement for medical checks of villagers by doctors from the state capital Jaipur, a bone-jolting two-hour drive away.

She also organized the opening of the first bank in Soda—a branch of the state-run State Bank of India—a significant success as 90 percent of India’s 600,000 villages have no banks.

But all that change doesn’t come without raising some local hackles.

When she constructed a drinking water reservoir that has created a shimmering blue lake in the middle of the village, she got her first taste of the bureaucratic hurdles that have repeatedly thwarted her.

“I was told we could not use government machinery to clean up reservoirs. Finally, they (the government) told me to do it on my own,” she said.

And that’s what she did—raising money from friends, family and companies to fund many of her projects.

Baskar Petshali, secretary of a local welfare charitable trust, says her problems stem from the fact “she’s a clean politician” who refuses to give bribes to get jobs done.

A senior state government official, speaking on condition of anonymity, called Rajawat’s initiatives “praiseworthy” but added she “wants to do things very quickly—she treads on toes and upsets vested interests.”

Rajawat is hopeful better leadership will come with the Indian government’s new drive to make lists of services and funds available on the Internet.

“If everything is online, people will start demanding accountability from their politicians,” she said.

She has not decided whether she will continue in development work once her five-year terms ends, but she is hoping her example will inspire other educated young people to take time out to serve their communities.

“Your roots are your foundation. You have to start at the bottom to make a difference—and there is so much left to do.”—Penny MacRae