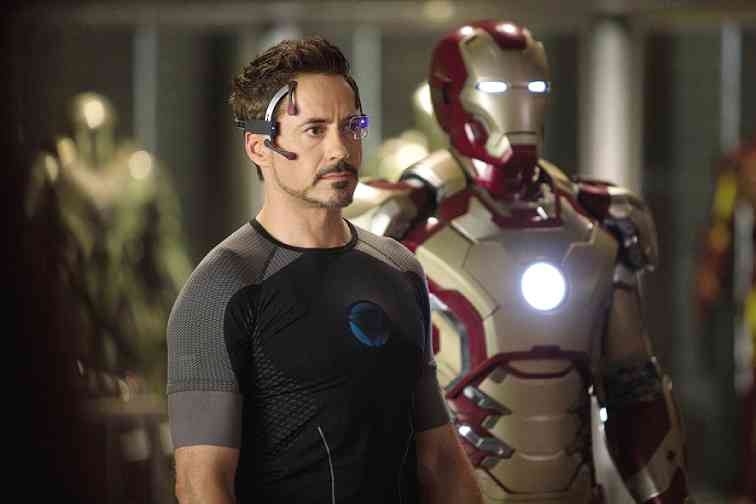 Marvel Studios’ “Iron Man” 3 is the continuation of the big-screen adventures of the world’s favorite billionaire—inventor Tony Stark aka Iron Man.

In the new movie, Tony Stark/Iron Man is pitted against an enemy whose reach knows no bounds. When Stark finds his personal world destroyed at his enemy’s hands, he embarks on a harrowing quest to find those responsible. This journey, at every turn, will test his mettle.

With his back against the wall, Stark is left to survive by his own devices, relying on his ingenuity and instincts to protect those closest to him. As he fights his way back, Stark discovers the answer to the question that has secretly haunted him: Does the man make the suit or does the suit make the man?

Based on the popular Marvel comic-book superhero Iron Man, who first appeared on the pages of “Tales of Suspense” (#39) in 1963 and had his solo comic-book debut with “The Invincible Iron Man” (#1) in May of 1968, Marvel’s “Iron Man” 3 returns with Robert Downey Jr. as Tony Stark, along with Gwyneth Paltrow as Pepper Potts, Don Cheadle as James “Rhodey” Rhodes, Guy Pearce as Aldrich Killian, Rebecca Hall as Maya Hansen, Stephanie Szostak as Ellen Brandt, James Badge Dale as Eric Savin, Jon Favreau as Happy Hogan and Ben Kingsley as The Mandarin.

In developing the story for Marvel’s “Iron Man” 3, producer Kevin Feige wanted to make sure it was not only a natural overreaching arc for Tony Stark, but also in alignment with previous events in the Marvel cinematic universe.

“The exciting thing about ‘Iron Man’ 3 is that it’s not only the culmination of the first two films, but it’s also a follow-up to ‘Marvel’s The Avengers,’” Feige says. “It’s one of the first situations where you have a movie that is the sequel to two different films and in a way that liberates it to be more unique than anything that has come before it, which is what we’re most excited about.”

Feige continues: “Tony Stark is a man who is all about the journey and character arc. When we first met him in ‘Iron Man,’ he was a pompous fellow, building weapons, and almost immediately he suffers a life-changing accident when he is blown up by one of his own missiles in Afghanistan. It galvanizes him into building the Iron Man suit and get out of the weapons game. ‘Iron Man’ 2 tests that resolve as he has some health problems and then in ‘Marvel’s The Avengers’ he faces a world-changing event that not only includes seeing the powers of other superheroes, but also having a portal to another world opened above his head.”

For the storyline of Marvel’s “Iron Man” 3, the filmmakers decided on a back-to-basics tone where they could explore what Tony Stark would do if all of his money and toys were stripped away from him and he was forced to find a way back to being a superhero.

“Early on in the development, we talked about this notion of taking Tony Stark back to basics because we wanted to see him just use his brain,” explains executive producer Louis D’Esposito. “You want to see what he can do when the odds are against him and it makes you wonder, ‘How is he going to get out of this one?’”

Executive producer Stephen Broussard explains the filmmakers’ decision to blend two different storylines together for the film. “There are two classic stories that have appeared in the ‘Iron Man’ comics—one is older and the other is more modern,” explains Broussard. “The older is the character called The Mandarin, and he is one of the most famous villains in the franchise. The character dates back to the 1960s and we wanted Shane [Black] and Drew [Pearce] to take that idea and make it contemporary for present-day audiences.”

Broussard adds, “We also wanted to combine that with another storyline in the comic called Extremis, which came out not too long before the first ‘Iron Man’ film in 2008. It deals with the biological enhancement of humans, and Tony must face super-powered humans in that. So we just thought, wouldn’t that be interesting if we tried to combine these two stories into one for ‘Iron Man’ 3?”

Opening across the Philippines on April 24 in Imax 3D, digital 3D and regular theaters, “Iron Man” 3 is presented by Marvel Studios in association with Paramount Pictures and DMG Entertainment. The film is distributed by Walt Disney Studios Motion Pictures.